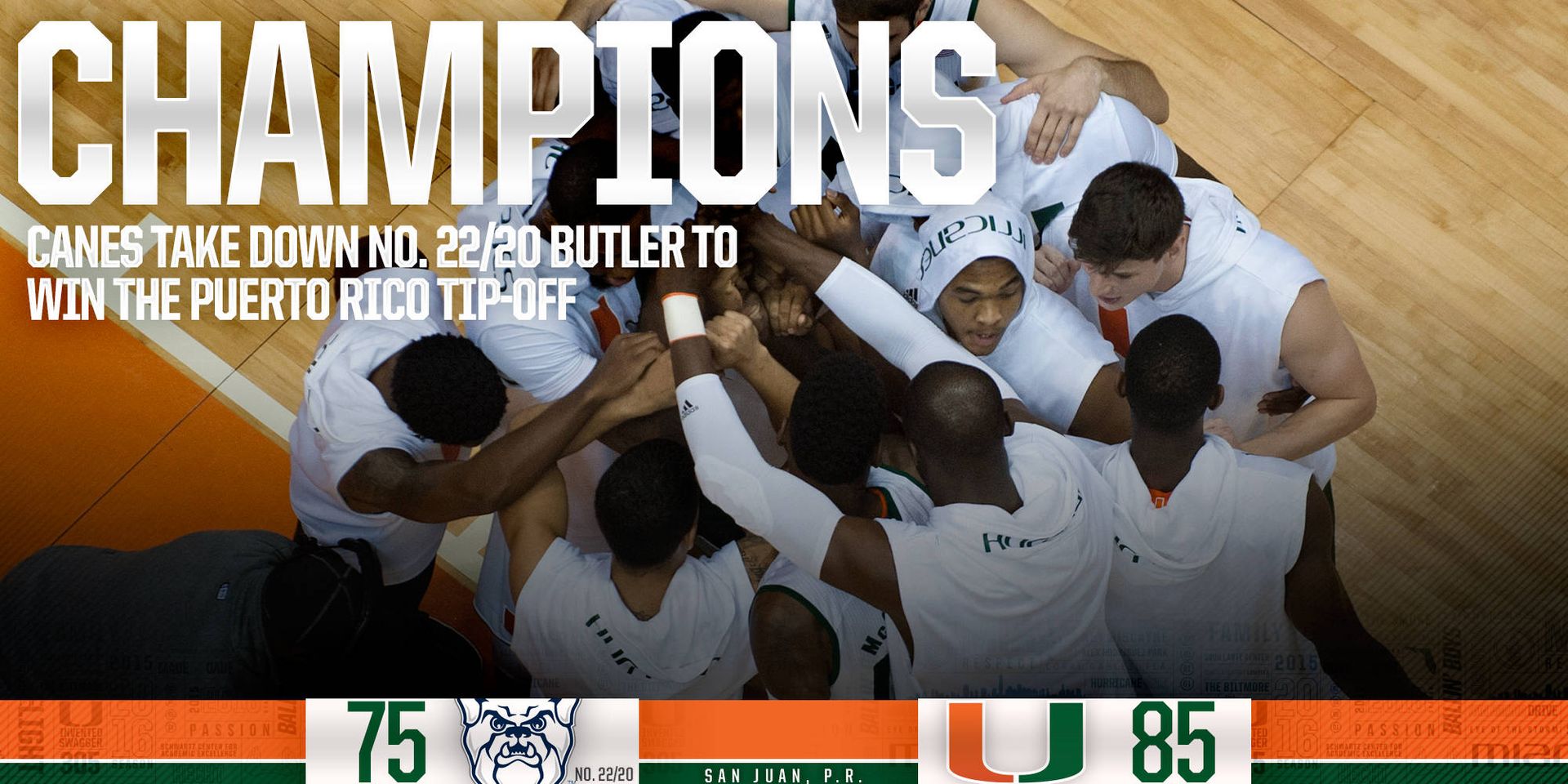 Canes down No. 22/20 Butler in Championship

Ja’Quan Newton added a career-high 17 points for the Hurricanes (5-0), who followed their romp against No. 16 Utah by building a big lead again, and then protecting that advantage against a big scoring burst from Kellen Dunham and the Bulldogs.

Dunham scored 20 of his 23 after halftime, helping Butler (3-1) trim a 19-point gap to four with about 3 1/2 minutes left. But the Hurricanes hit enough free throws late to hang on, earning their second Tipoff title and first since beating Providence to win the inaugural event in 2007.

It was quite a week for the Hurricanes in San Juan, from their three-game run to the homecoming for Rodriguez — who grew up watching a local pro team play in this same arena.

Rodriguez was named the Tipoff’s most outstanding player, an honor he received while wearing the flag of his native Puerto Rico draped around his shoulders.

Miami entered the season expecting to contend in the Atlantic Coast Conference with a veteran squad that won 25 games, blew out eventual national champion Duke in its famously hostile Cameron Indoor Stadium and reached the NIT championship game last year.

With four seniors in the starting lineup, Miami was picked fifth in the league — the same position it had when it won the regular-season and ACC Tournament titles in 2013 — behind No. 1 North Carolina, No. 5 Duke, No. 6 Virginia and No. 18 Notre Dame.

After the Hurricanes’ showing in San Juan, they have the look of a team that will be a major force in that title chase.

Miami shot 52 percent, the latest in a series of hot-shooting performances that are turning into a habit. The Hurricanes also scored 19 points off turnovers, part of a formula that has worked so well to start the year.

Roosevelt Jones finished with 19 points and was the only offense for much of the night for Butler, which shot 44 percent. But Dunham suddenly jolted awake after a 5-for-20 effort in Friday’s win against Temple, helping Butler climb back in it.

Series and Miscellaneous Notes
-Miami’s win over No. 22/20 Butler handed the Hurricanes the Puerto Rico Tip-off championship.
-The Hurricanes’ win also gave Miami its second straight win over a ranked opponent, after defeating No. 16 Utah on Nov. 20.
-The win also improved Miami to 10-20 against ranked opponents under head coach Jim Larrañaga.
– Angel Rodriguez was named most outstanding player while Tonye Jekiri and Sheldon McClellan were named to the all-tournament team.
-Miami’s Sunday night’s matchup with Butler was the first all-time meeting with the Bulldogs.
-Miami improved to 16-9 in neutral site games under head coach Jim Larrañaga.
– Miami has won the Puerto Rico Tip-Off championship in both of its last two appearances.
-Miami’s win over Butler was its sixth straight win in basketball tournaments played in Puerto Rico. – The Hurricanes are 12-3 all-time in basketball tournaments played in Puerto Rico. Miami’s last loss in Puerto Rico came back on Dec. 22, 1999.

Team Notes
-Miami has scored 85 points-or-more in all five of its games this season.
-The Hurricanes led by as many as 19 points.
– Miami has led start to finish in its past two games. The Canes last trailed an opponent, by two, in the first minute against Mississippi State
-Miami held a 25-9 lead with 11 minutes remaining in the first half.
-Miami held Butler to 28 points below its season average. Butler came into the game averaging 103 points per game.
-The Hurricanes’ last three victories have come by a combined total of 60 points.
-Miami outrebounded Butler 33-30. The Hurricanes have outrebounded four of their first five opponents this season.
-Miami’s bench outscored Butler 31-16. Miami’s bench is averaging 30.6 points per game.
-Miami had three players score in double figures: Angel Rodriguez (19), Ja’Quan Newton (17) and Tonye Jekiri (12).

Individual Notes
-Redshirt senior Angel Rodriguez scored a team and season high 19 points on 6-of-10 shooting. He also tied a season-high with three steals. Rodriguez has posted six steals in his last two games.
-Twelve of Rodriguez’s 19 points came in the second half.
-Following the game, Rodriquez was named the Most Outstanding Player of the tournament.
-Sophomore guard Ja’Quan Newton finished with a career-high 17 points.
-Senior Tonye Jekiri scored 12 points and pulled down a game-high 12 rebounds to record his second-consecutive double-double of the season.
-Jekiri surpassed 10-or-more rebounds for the fourth time this season.
-Junior guard Davon Reed’s five rebounds were a season-high.

Coach L Notes
-Jim Larrañaga improved to 566-383 all-time as a head coach and moved to 96-49 at Miami.
-This is the second-consecutive year Miami has opened the year 5-0.
-Miami improved to 24-6 under Larrañaga in the month of November.