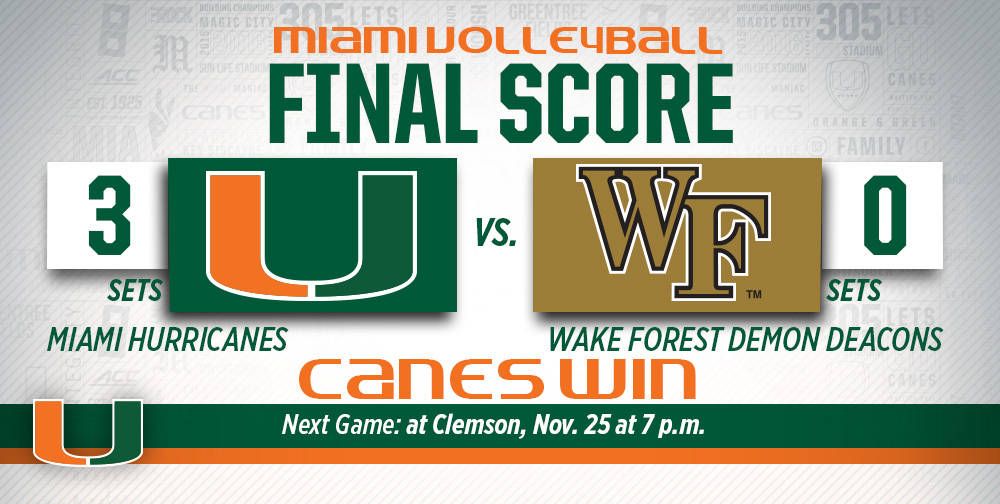 The Hurricanes (19-9, 12-6 ACC) jumped out to an 8-3 lead early in the opening set, but Wake Forest went on a 8-0 run to take a 11-8 lead. The Canes and Demon Deacons would battle back and forth the rest of the way, but Miami would prevail, 25-23. Olga Strantzali, Alexis Mourning and Taylor Scott each had four kills, with Strantzali hitting 1.000 for the set.

“I think we just had to stay focused on our side of the net and on what we’re doing,” Gandara said “We made some errors that we need to clean up. I think when you know what’s going on, you kind of settle down a little bit and you’re not panicking. It felt like we were in control of what we had to do.”

Miami and Wake Forest battled back and forth in the second set, with the Canes taking a 14-13 lead before rattling off eight straight points to build a nine-point cushion. During the run, the Hurricanes saw senior Caitilin Donahoe record two service aces and freshman Anna Haak tally three kills. Miami closed out the 25-16 second set victory to take a 2-0 lead into the intermission.

“Coming of the bench is tough,” Donahoe said. “But getting those two aces really put me more in the groove and ready for the rest of the game, which was great.”

The Demon Deacons continued to fight out of the intermission, playing Miami tight and going on a 3-0 run to tie the set at 13. The Canes and Deacs would tie eight more times, reaching a stalemate at 23, before a black and a kill by Haak would secure the 25-23 win in the set and the sweep over Wake Forest.

“Any time you get a win, it’s great,” Miami head coach Jose “Keno” Gandara said. “I don’t think we played our best. I think we played just well enough to win. It’s great to end with a win and hopefully we can keep getting better.”

Scott led Miami with 12 kills in her final home match as a Cane, adding three digs and a block in the Hurricanes’ three-set victory.

“It’s great to end with a win,” Scott said . I know my role and I know what I have to do in order for us to be successful. It’s always good to come out on top. I’m glad that we won and I’m glad that all the seniors played well in their last time here.”

Strantzali was excellent for the Canes, recording nine kills on a team-high .643 hitting percentage. The sophomore also had two blocks and a career-high six service aces against Wake Forest.

Mourning closed out her final match at the Knight Complex with eight kills and team-high five blocks, while hitting .333 against the Deacs. Fellow middle blocker Lucia Pampana added four kills and two blocks, while outside hitter Kelsie Groot had six kills, three blocks and a team-high 10 digs.

“It’s kind of bittersweet, but I’m glad we won,” Mourning said of her last home match. “We played pretty well after our game on Friday. It’s nice to come out with a win from your last home game ever, but it’s kind of sad at the same time. I’m going to miss it.”

Haley Templeton kept Miami’s offense balanced, dishing out 35 assists while the Hurricanes hit .312 as a team. Templeton, who added two blocks, five digs and a kill, spread the ball around as six different Canes recorded kills against Wake Forest.

“That’s Haley’s job and a function of taking advantage of the matchups we get at the net, if we can” Gandara said of Miami’s balanced attack. “Also, we have to give the ball to the hot hitter at times.”

Haak and Donahoe proved to be two of several key reserves for the Canes on Sunday afternoon. The freshman Haak tallied four kills a block and a digs, while the Donahoe recorded two aces and three digs in her final match at The Knight.

Sophomore Sylvia Hernandez had six digs and an assist off the bench, while freshman Kolby Bird also saw action in reserve. Kalysta White, who had seven digs and three assists as Miami’s starting libero, was happy to see her team bounce back from Friday’s loss to Duke to close out their home schedule with a victory.

“It was a tough loss on Senior Night, but we worked hard in practice yesterday,” White said. “We knew we needed to come out stronger and get a win here, so it was good to get a win and it’s even better when it’s your last home game. It’s crazy to play on this court for the last time. I’m glad that we got a win.”

Following this weekend’s action, Miami will hit the road for the final weekend of the 2015 regular season. The Canes will travel to Clemson and Georgia Tech to close out ACC play, facing the Tigers at 7 p.m. on Nov. 25 and the Yellow Jackets in the regular season finale at 1 p.m. on Nov. 27.