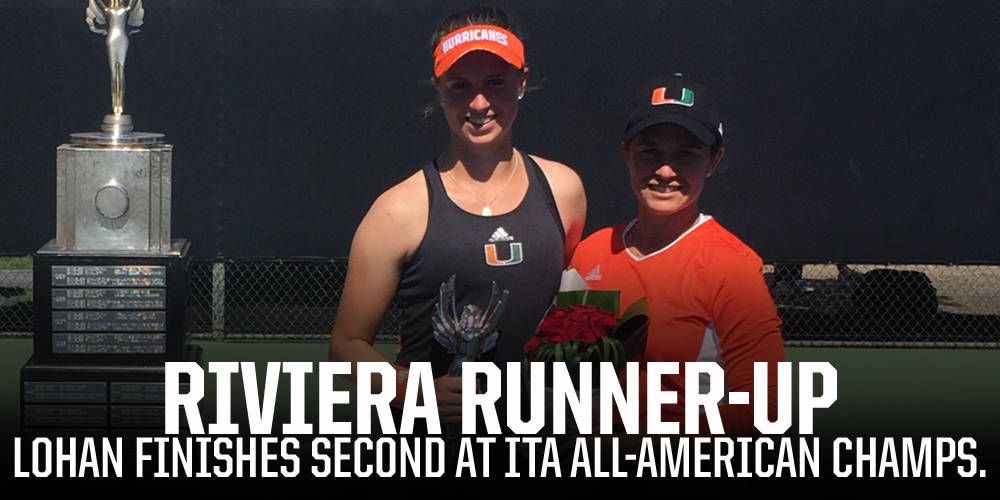 Lohan, ranked No. 13, fell 1-6, 2-6 to Collins, the seventh-seed in the tournament main draw. Despite the defeat, Lohan still made history, becoming the first Hurricane ever to reach the final at the high-level event.

“Sinead’s week was exactly what it needed to be for the type of physical and mental tennis she is playing,” Miami associate head coach Laura Vallverdu said. “She knows the areas she needs to improve on in order to bring her game to the next level.”

Lohan is now 8-2 in her sophomore campaign, boasting a 6-2 record against ranked opponents, with all eight of those matches coming against players in the top 55. The Waterford, Ireland native has four victories over top-30 opponents this fall.

By reaching the tournament final, Lohan earned an automatic entry into the elite indoor tournament of the year, the USTA/ITA National Indoor Intercollegiate Championships, held Nov. 12-15 in Flushing Meadows, N.Y.

“I am very happy with her as an athlete and as a person,” Vallverdu said of Lohan. “I can’t wait to watch more of her.

For Collins, the victory gave the title at each of the first two major fall tournaments, as she previously won the inaugural Oracle/ITA Masters.

The Hurricanes resume their fall season Oct. 16-18 when they travel to Fort Myers, Fla for the Bedford Cup.

To learn more about University of Miami tennis, follow @HurricaneTennis.

Photo courtesy of the ITA.