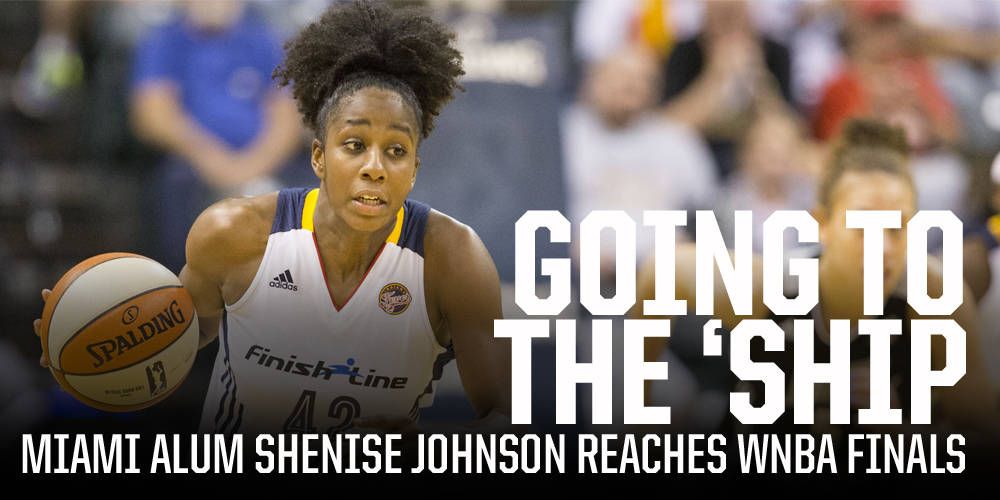 CORAL GABLES, Fla. – In her first season with the Indiana Fever, University of Miami alumna Shenise Johnson has advanced to the WNBA Finals.

The Fever defeated the top-seeded New York Liberty 66-51 Tuesday night at Madison Square Garden in New York to win the Eastern Conference crown. Johnson, a two-time All-American at Miami, finished the game with the best plus/minus among all players at plus-20.

The Fever won road games in both the conference semifinals and finals, after dropping game one in each series. Indiana will face the Minnesota Lynx in the WNBA Finals.

The 2011 ACC Player of the Year, Johnson has scored double figures in five of the Fever’s six playoff games thus far and is averaging 12.3 points and 4.7 rebounds per game in the postseason. The 5-foot-11 guard has started all six games and is shooting 51.6 percent (32-of-62) from the field.

Johnson spent the first three seasons of her career with San Antonio, who selected her fifth overall in the 2012 WNBA Draft. The Henrietta, N.Y. native reached the playoffs twice with San Antonio, but this will be her first trip to the WNBA Finals and she is the first Miami alum to advance that far.

The best-of-five series between the Fever and Lynx begins Sunday, Oct. 4 at 3:00 p.m. at the Target Center in Minneapolis, with the game televised on ABC.