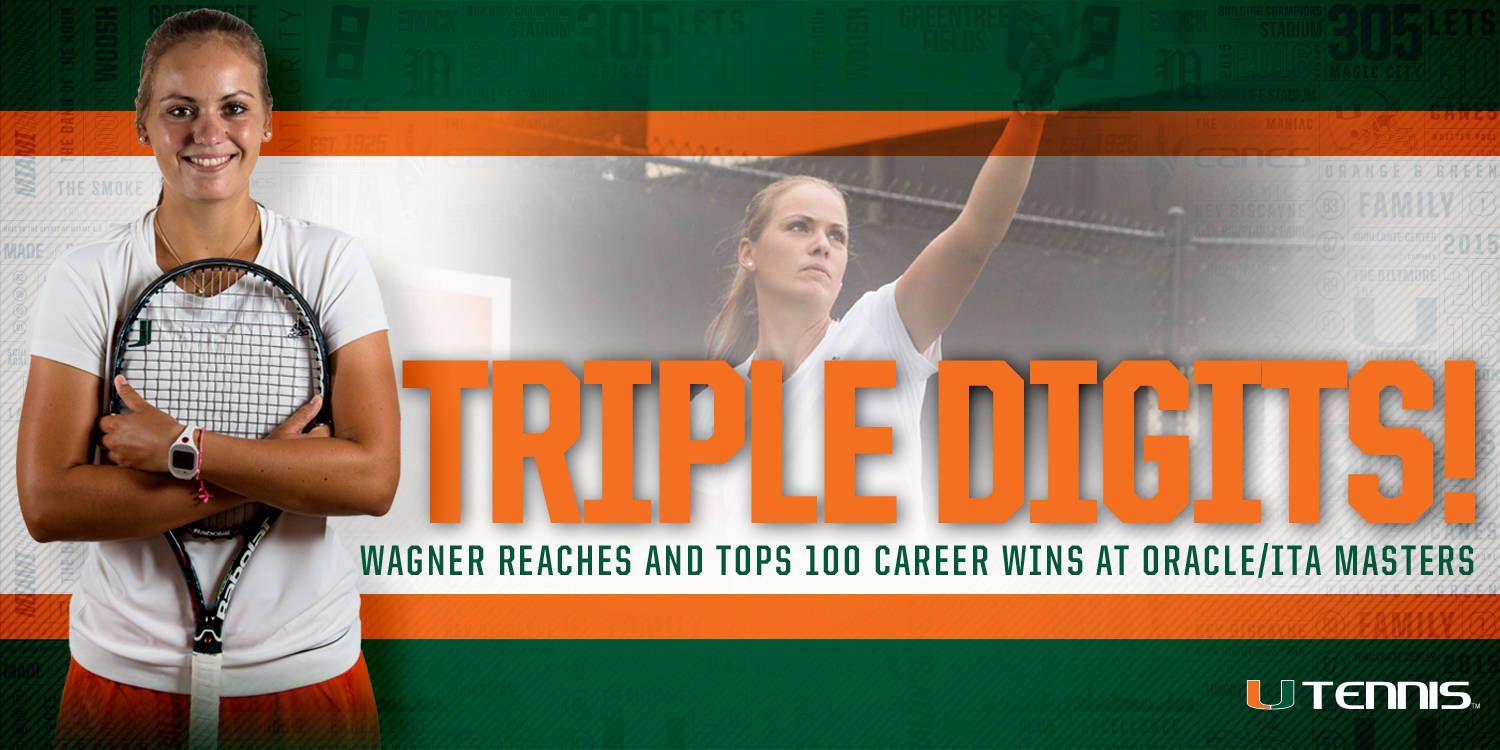 MALIBU, Calif. – Senior Stephanie Wagner of the University of Miami women’s tennis team defeated two top-20 opponents Saturday at the Oracle/ITA Masters, but that was far from her only accomplishment.

Wagner’s first victory of the day at the Malibu Racquet Club made her the eighth player in program history to reach 100 career wins.

Ranked sixth in the country, Wagner opened the day by picking up a 7-5, 6-3 victory over No. 18 Rachel Pierson of Texas A&M in the consolation quarterfinals. It was that win that got her to triple digits.

A native of Amberg, Germany, Wagner won 27-plus matches in each of her first three campaigns at Miami and her 38 victories last year tied for the fifth-most in a year in school history. Last season, Wagner became the seventh Hurricane to reach the NCAA Singles Championship semifinals and was an ITA All-American, a First Team All-ACC selection and the ITA National Player to Watch.

After taking down Pierson, Wagner won in impressive fashion over Vanderbilt’s Astra Sharma, 6-3, 6-1. The 2015 NCAA Tournament MVP and SEC Tournament MVP, Sharma is ranked No. 14 in the country.

Wagner’s second victory of the day Saturday sent her to Sunday’s consolation finals, in which she will face Cal’s Klara Fabikova, ranked No. 16. Additionally, it put her just one win behind Gabriela Mejia—the last Hurricane to reach 100 wins—for seventh on the program’s all-time wins list (102).

Along with Wagner’s two singles victories, No. 13 Sinead Lohan also had a quarterfinals matchup against eighth-ranked and fourth-seeded Danielle Collins. A rematch of a contest Lohan won last year in Charlottesville, Va., the Miami sophomore fell 6-0, 6-1 to the 2014 NCAA singles champion.

Wagner and Lohan capped the day by playing a consolation doubles match against eighth-ranked Matea Cutura and Christine Maddox of Pepperdine. In a close affair, the Hurricanes came up just short in a 6-4, 7-6 (7-5) decision for the Waves in their home city.

For more information on the University of Miami women’s tennis team, follow @HurricaneTennis.