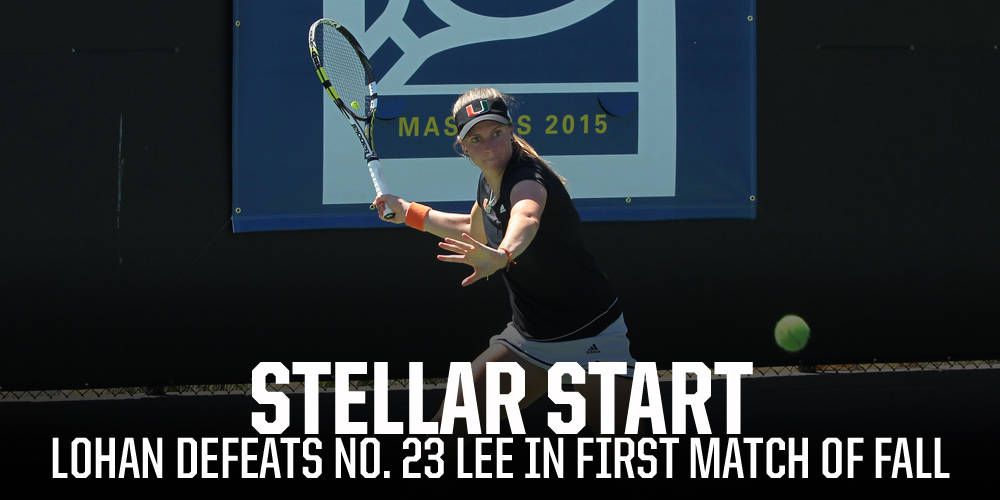 MALIBU, Calif. – An ITA All-American last season, sophomore Sinead Lohan got her 2015 fall campaign off to a supeb start Friday at the Malibu Racquet Club.

The nation’s 13th-ranked player, Lohan took down No. 23 Jasmine Lee of Mississippi State, 7-5, 4-6, 6-3, in the opening round of the inaugural Oracle/ITA Masters, the first national collegiate championship of the season.

“Lohan didn’t play her best tennis today, but was able to stay calm and exploit her opponent’s weak spots in the big moments,” Miami head coach Paige Yaroshuk-Tews said. “Mentally, she was very sound today. That was the difference.”

A native of Waterford, Ireland, Lohan’s victory over Lee was the sixth of her young career over a top-40 opponent and her third against a top-25 player.  In the quarterfinals Saturday at 3:30 p.m. ET, she will face Virginia’s Danielle Collins, who is ranked eighth and seeded fourth. Lohan defeated Collins, the 2014 NCAA singles champion, in Charlottesville, Va. last season for her first-ever win over a top-40 opponent.

Also participating in the singles field of the Oracle/ITA Masters was fellow 2015 All-American Stephanie Wagner, a junior ranked sixth in the country. Wagner, seeded second in the field, dropped a thrilling three-set match to No. 10 Giuliana Olmos of USC.

After taking the opening set, Wagner had multiple match point opportunities in the second, but Olmos fought off each and every one. Olmos went on to take the set in a tiebreaker en route to picking up a 4-6, 7-6 (7-4), 6-3 victory.

“Wagner played a great player today,” Yaroshuk-Tews said. “It was high-level tennis and unfortunately Steffi wasn’t able to shut the door when she needed to. Proud of the fight and hoping she learns from today moving forward.”

Wagner is set to face Texas A&M junior Rachel Pierson, ranked No. 18, in the consolation draw Saturday at 3:30 p.m. ET.

Lohan and Wagner teamed up for a doubles match against Cal’s Maegan Manasse and Denise Starr, ranked third in the nation and the top seed in the field. The Golden Bears earned a 6-1, 6-0 victory. The Miami duo will face Pepperdine senior Matea Cutura and junior Christine Maddox, ranked eighth, in the consolation draw Saturday at 11:00 p.m. ET.

To learn more about the University of Miami women’s tennis team, follow @HurricaneTennis.