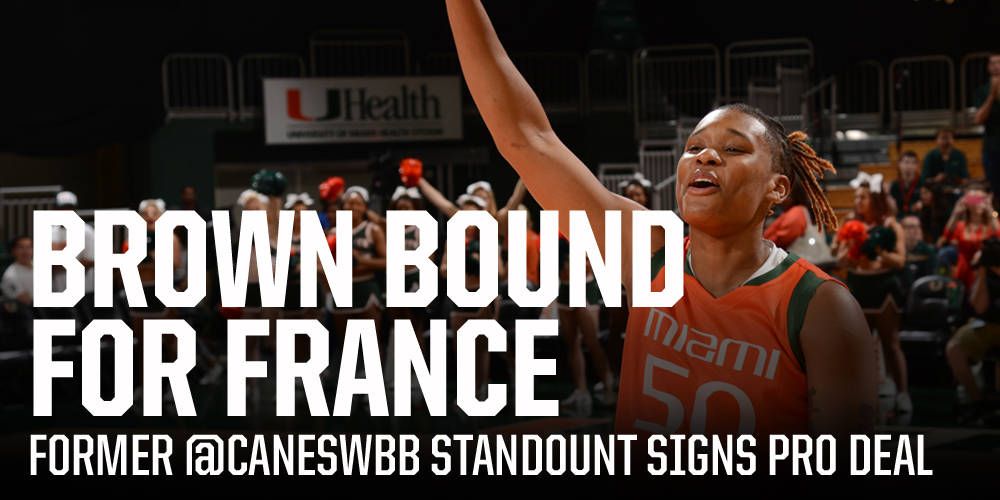 A 6-foot-1 forward who attended Miami from 2010-14, Brown signed a contract with Club Basket D’Ifs in Chemin du Val, France, a part of the NF1 league.

“I’m so grateful for this opportunity,” Brown said. “This will be my first time traveling out of the country. I can’t wait to embark on this new adventure and grow with my new team in France.”

A native of Monroe, La., Brown played in 128 games in orange and green, good for the second-most in program history. She recorded playing time in each and every game of her Miami career.

Brown, who heads to France Sunday, helped the Hurricanes advance to the postseason in all four of her years at Miami, including a trio of trips to the NCAA Tournament. The Hurricanes went 91-37, including a 45-19 mark in ACC play.

Additionally, Brown was part of two Miami squads that went undefeated at home and on the first ACC regular season championship team in program history in 2010-11.

As a senior in 2013-14, Brown logged 23 starts in 31 games played and averaged 5.8 points and 5.0 rebounds per game. She ranked third on the team in rebounding, fourth in blocks and tied for fourth in starts that season.

Brown is the 15th Hurricane during Katie Meier’s tenure as head coach who has gone on to ink a professional deal.