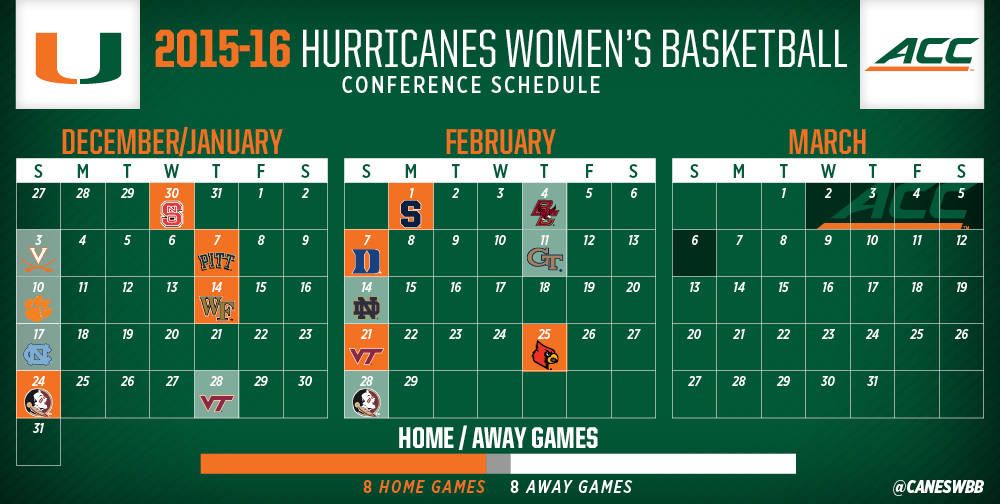 The University of Miami will have 12 of its 16 ACC games telecast live on ESPN2, RSN or ESPN3, including all eight home contests. In addition, all nine of Miami’s non-conference contests at the BUC will be streamed live on ESPN3 across all WatchESPN platforms.

The Hurricanes begin their conference slate by hosting NC State at the BankUnited Center Wednesday, Dec. 30 at 7:00 p.m. on ESPN3.

“I am excited, as always, about playing and coaching against the best teams in the country,” Miami head coach Katie Meier said. “I am also extremely thrilled about the national relevance that comes with 12 of our 16 ACC games being carried either by RSN or the ESPN networks.”

The ACC opener against the Wolfpack begins a span of 12-straight games rotating between home and away for the Hurricanes.

Three of the teams during that stretch won NCAA Tournament games last season, with Pitt making the second round, North Carolina advancing to the Sweet 16 and Florida State reaching the Elite Eight.

From that group, Syracuse got to the second round of the 2015 NCAA Tournament, Duke reached the Sweet 16, Notre Dame made the national championship, Louisville advanced to the Sweet 16, and, as aforementioned, Florida State was an Elite Eight participant. Last season, the Hurricanes handed Notre Dame its only conference loss in two years in the ACC.

“I’m looking forward to this season because I love the energy of this team,” Meier said. “I cannot wait to see that energy on the court as we seize the opportunity the ACC presents with so many games against teams that saw postseason success last year.”

The last stretch of ACC action comes during the ACC Tournament, which runs from March 2-6 at the Greensboro Coliseum in Greensboro, N.C.

To keep up with the University of Miami women’s basketball team as it readies for the 2015-16 season, follow @CanesWBB.