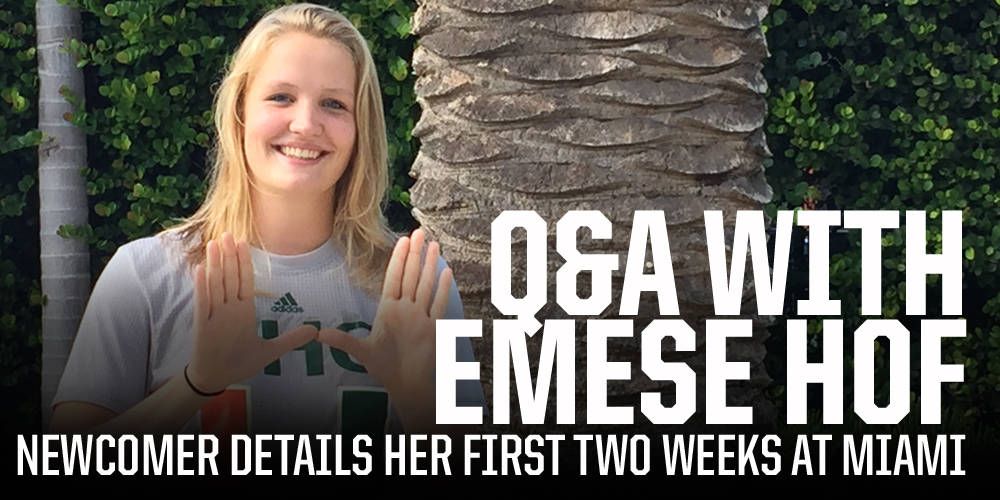 A 6-foot-3 forward from Utrecht, Netherlands ranked as a top-15 international recruit by ProspectsNation.com, Hof shed some light on what her experience as a Hurricane has been like so far . . .

Q: What has it been like for you so far being at Miami?

A: It’s been good, lot of adjustment, but I think it’s going to be alright. Just a little bit of finding my place, just in school and in my dorm and on the team, but it’s going to go just fine.

Q: What has been the most enjoyable part of coming to a new place?

A: You meet a lot of new people and the weather. Just, the part that is scary, stepping out of your comfort zone, also I do like it. It’s something new, fresh.

Q: How much does it help that you came with Laura [Cornelius] who you already had a relationship with?

A: The first few days we were always eating with each other. We didn’t even have things to talk about anymore because we were just with each other all the time. So, now we’re a little bit more going our own ways because we don’t have all our classes together and stuff like that. It’s a big advantage because you can just talk in your own language and settle down a little bit [Laughs].

Q: Is there anyone on the team who has kind of taken you under her wings a little bit and started to show you around?

A: Well, I think all of them are, the staff as well. Loni [Lonnette Hall] did it the first couple of days, but when you ask something, all of them are willing to bring you or take you somewhere.

Q: What are you most excited for?

A: The season to start [Laughs]. I think that’s it, just to play some games. I do like to practice. It’s different as well. You have more attention, so many people on the court just for three people practicing. At home it was three coaches on the court and 25 people who were practicing. Not that, that was bad or anything, just shifting.

Q: Are there any classes that you’ve really enjoyed so far?

A: We have sports psychology and I always think that’s interesting. We have sociology as well, but that’s wider.

Q: The basketball team came to your home country a few weeks ago and you got to experience some of it with them. What was that whole thing like for you?

A: That was really cool. It was also a little bit weird because we were the freshmen, but they didn’t know where to go and stuff like that so Laura and I were kind of like the travel guides [Laughs]. So that was like, “Okay, this is weird,” but I did enjoy it, though. We went into the city and stuff and they were cool. It was cool to do.

Q: Was it weird seeing your future teammates playing against people you knew from the Netherlands when they played against the Dutch National Team?

A: Yeah, a lot of the girls from the national team are my friends so they were all like, “So, how are they?” Six of them would come to me before the game started [and ask], “How was today?” I was like, “You’re going to play against them now. Isn’t this weird?” [They would say], “No, no, how was it?” I did like it. It was cool. Those are my friends as well, so they can see where I’m going to go so they know a little bit.

Q: When you look back on it, what made you decide to pick Miami?

A: I think the biggest part was Katie [Meier]. I really did like how she interacted with people and what she stands for. The school is good and the surroundings, [Laughs] you can’t say that is a minus, so . . . altogether it was the best fit for me.