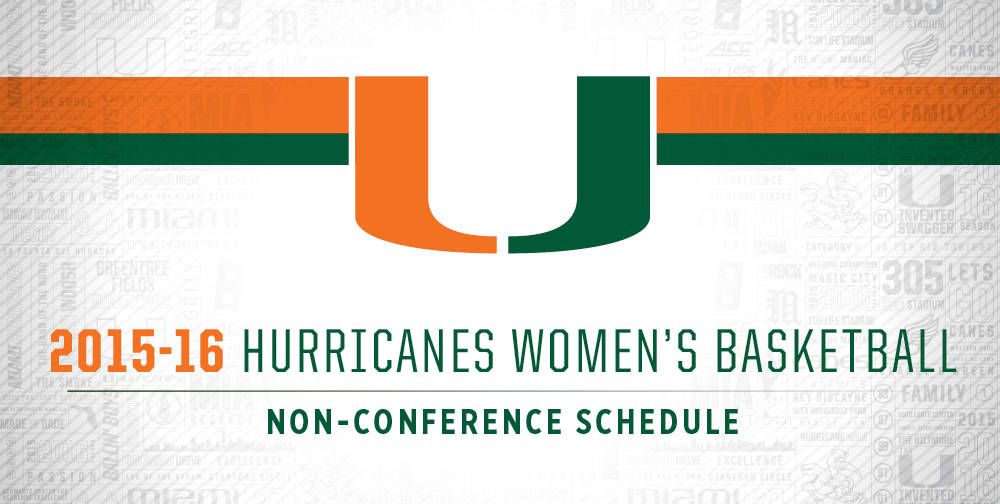 The Hurricanes will play 13 games before Atlantic Coast Conference action begins, including eight contests at home at the BankUnited Center and a neutral site matchup against 2012 national champion Baylor.

“As we build off our sixth-straight postseason appearance, we wanted to really challenge this team with our non-conference scheduling,” Meier said. “We feel great about our returnees and the terrific experiences they have had. We also welcome three newcomers who will add great talent and depth.”

After that pair of games, the Hurricanes have three consecutive road affairs, with the first at Old Dominion Nov. 17. Miami then trips to Loyola-Chicago Nov. 21 and Charlotte, where Meier spent four years as the head coach, Nov. 23. The times for all three of those games are to be announced.

The Hurricanes will then host UW-Milwaukee and La Salle in the Miami Thanksgiving Classic from Nov. 27-29, with a game at 1:00 p.m. each day. Miami will face the Panthers the 27th and the Explorers the 29th, while they will square off against one another the 28th.

To open December, Miami will face off against Illinois in the Big Ten/ACC Challenge Dec. 2 at 7:00 p.m. at the BankUnited Center. The Hurricanes are 3-1 in their last four matchups in the event, including a 66-54 victory over Wisconsin at home in 2014.

The team will conclude its non-conference slate against FIU Dec. 22 at 2:00 p.m. at the BUC.

“We purposefully put ourselves in some difficult road environments because we feel like it will get us ready for the ACC and postseason play,” Meier said.

Miami’s 16-game ACC schedule has yet to be announced, but the opponents have been determined. The Hurricanes will have home games against Duke, Florida State and Louisville, all of who made the Sweet 16 in 2015, as well as NC State, Pittsburgh, Syracuse, Virginia Tech, and Wake Forest.