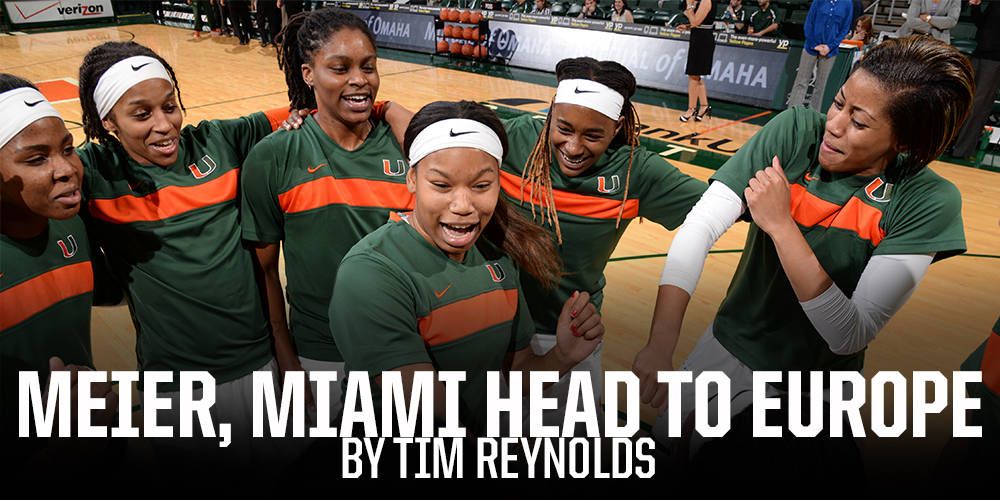 CORAL GABLES, Fla. (AP) — For Miami coach Katie Meier and starting guard Adrienne Motley, a weeklong trip to Europe is about going back to the beginning. Both think it’ll brighten the Hurricanes’ future as well.

The Hurricanes — a second-round NCAA team last season — arrived in Europe on Monday to start an eight-day, three-country whirlwind. For players, the trip combines team-building, four games, new experiences and a chance to see another part of the world. Motley will be returning to her birthplace, and Meier will be returning to where her coaching life basically began.

“I just hope that we’re not on our phones the whole time,” Meier said. “I asked the team, use your phone as a camera but don’t be sitting in Paris with the music playing and be texting somebody. Just sit and take it all in.”

Most of the players haven’t seen Europe before, so this trip — with stops in Amsterdam, Belgium and then Paris — will be an immersion course of sorts in life overseas.

The game schedule starts with matchups Tuesday and Wednesday against the Dutch national team. That’s where Meier’s present and future will align, since the Dutch roster includes guard Laura Cornelius and forward Emese Hof — both of whom will be enrolling at Miami in the coming weeks to begin their freshman seasons.

It’s unclear how much time, if any, Cornelius and Hof will play against their soon-to-be Miami teammates. Meier raves about both players, and has since Miami signed them earlier this year.

“I’m excited to see them,” said Motley — who was born in Amsterdam in 1995, then moved to the United States about a year later once her parents’ time serving in the military in The Netherlands was complete. “We’ve seen them play on YouTube and in FIBA games. Other than that, I haven’t seen them play in person so it’s going to be exciting.”

Motley can’t wait for that part.

The meals, let’s say she’s been dreading those.

Suffice to say, for some first-time European visitors on this trip, the fear level over food is a tad high.

“I’m a terribly picky eater,” Motley said. “Coach is telling me to try different things. But hey, I’m not going to try anything that’s been moving. No snails, anything. I like chicken and waffles, and they say the Belgian waffles are pretty good so I can’t wait to see how many of those I can eat.”

Among the highlights from the jam-packed itinerary: Walking tours, a visit to the Anne Frank House Museum, a canal tour in France, a pregame excursion to Flanders Cemetery, guided sightseeing in Paris, a trip on the Seine, an outing to the Louvre and even a midnight appointment atop the Eiffel Tower — on the night before a 1:30 p.m. game, no less.

That’s a clear indicator that the games are secondary. Meier is even planning to go without scouting or postgame film breakdowns.

“If I start yelling at players on this trip, I might need to get a better life,” Meier said. “I’m not going to be laid-back about it, but there’s a lot to get out of this trip.”

Midway through the trip, there’s a bonus for her as well.

On Friday in Bruges, Belgium, the Hurricanes will face a club called BC Waregem. Meier spent three seasons playing for Waregem after she graduated from Duke — and that’s also where she started her coaching career, working with kids aged 15-17 over those years while teaching conversational English in whatever spare time she had.

Many of the people she met in Bruges are still there, and the red carpet will be rolled out for the Hurricanes.

“They’re still some of my best friends,” Meier said. “All the people I played with, they’re still in the same town. They’re doing so much for us there. They’re honored that we’re coming. It’s just unbelievable and it means a lot.”

Motley doesn’t know exactly what awaits this week, but fully expects a better team is coming back to Coral Gables.

“We’ve already got a really good bond from basically being here all summer together,” Motley said. “This trip is going to make us even closer, so I think it’ll make us better.”