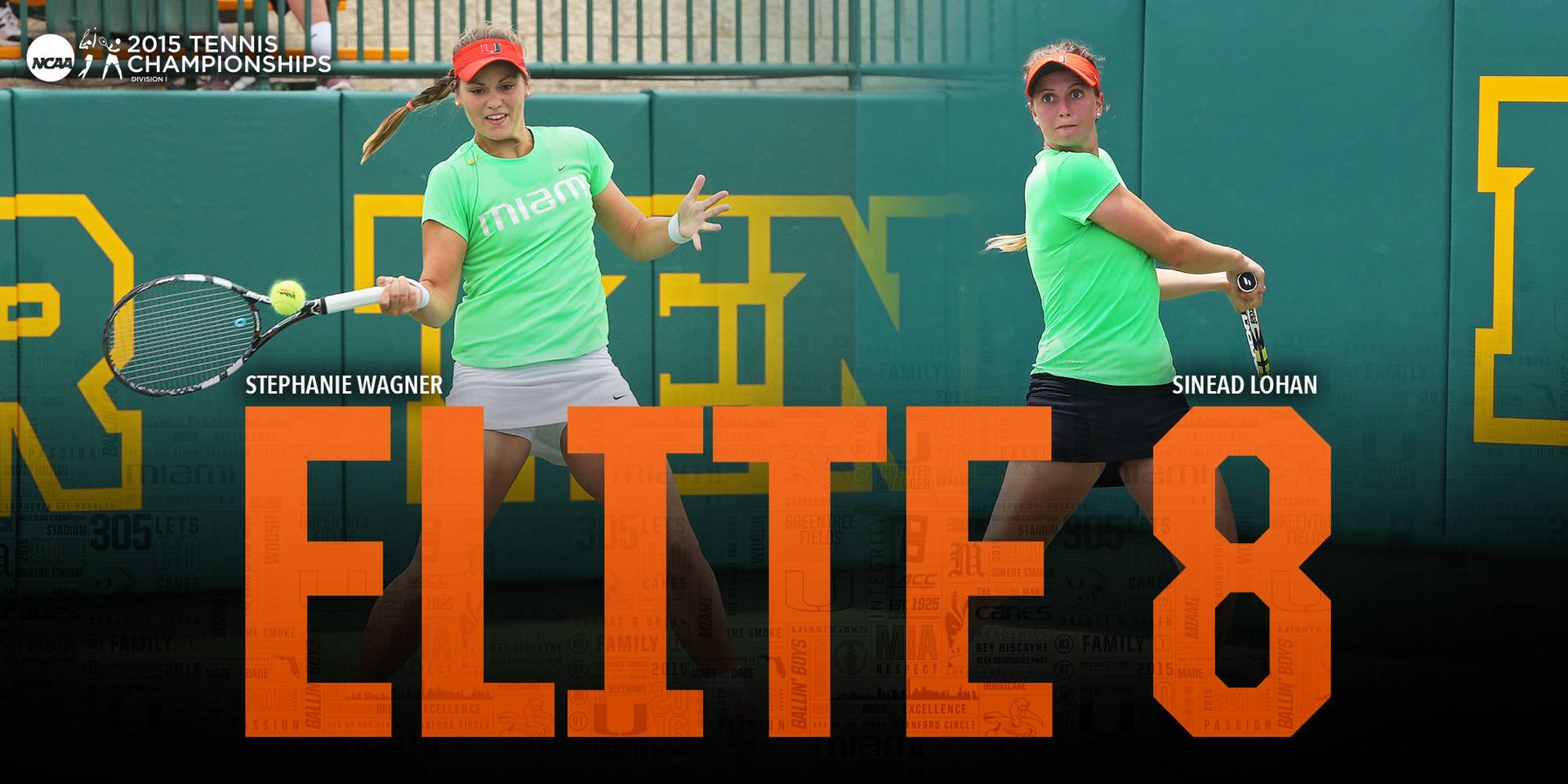 WACO, Texas – The University of Miami women’s tennis team was one of just two programs in the nation to have two players advance to the quarterfinals of the NCAA Singles Championship Friday at the Hurd Tennis Center.

Wagner’s match had many ebbs and flows, beginning with a dominant first set from the First Team All-ACC selection. After dropping the opening game, Wagner won six in a row to take the first set, 6-1, breaking all four of Gavrilovska’s serves in the process.

The second set included three separate weather delays and only twice did either player win even two straight games. The second time came when Gavrilovska closed out the set by breaking and then holding to take set two, 6-4.

“I played very well in the first set. In the second set it kind of got away from me a little bit,” Wagner said. “In the third set I was just trying to pull it out somehow. [I was] just trying to play long points, trying not to commit as many unforced errors, believe in myself, and be positive.”

The first five games of set three went by without a break, and Wagner had a 3-2 lead. The next game then started a stretch of five straight breaks to end the match, capped by Wagner closing it out for a 6-1, 4-6, 6-4 victory.

“Steffi is incredibly poised right now,” Yaroshuk-Tews said. “She’s stepping out on the court right now and you can definitely see that she has a plan, and she is being really meticulous in carrying out her plan.”

Lohan’s match began after the second weather delay concluded. For the second straight day, she got off to a rocky start, but turned it around for a straight set victory. Beazant jumped out to a 4-0 lead, but the ACC Freshman of the Year won five straight games to take a 5-4 edge.

Beazant then staved off four set points to even it at 5-5, but Lohan won the final two games of the set to earn a 7-5 victory in the first set.

“In the third game, Sinead and I kind of figured out what was going on,” Yaroshuk-Tews said. “To be able to implement a plan is one thing. For a freshman to be carrying that plan out against such a good player is something completely different, and Sinead listened.”

Lohan lost the opening game of the second set, and then took over the rest of the way. The Waterford, Ireland native won each of the final six games to take the second set in dominant fashion and win the match, 7-5, 6-1.

“I don’t really look at the rankings that much. I don’t really worry about that,” Lohan said of defeating three straight seniors ranked ahead of her nationally. “I just take every match the same way. I concentrate on me, and not them.”

This is the third time in program history that Miami has placed multiple players in the Elite Eight of the NCAA Singles Championship. Current Miami assistant coach Laura Vallverdu reached the finals in 2009, while Julia Cohen made the semifinals. The following year, in 2010, Vallverdu advanced to the semifinals and Bianca Eichkorn reached the quarterfinals.

Half of the this year’s Elite Eight comes from the Atlantic Coast Conference, as Wagner and Lohan join reigning champion Danielle Collins of Virginia and Jamie Loeb of North Carolina.

Lohan is one of just two freshmen in the quarterfinals, along with No. 13 [9-16] Josie Kuhlman of Florida. The two will play against each other Saturday at 2:30 p.m. ET. Wagner’s match against No. 1 [1] Robin Anderson of UCLA will precede that at 1:00 p.m. ET. Live video for the matches will be available HERE.

To track the action during the quarterfinals matches, as well as to learn more about University of Miami women’s tennis, follow @HurricaneTennis.