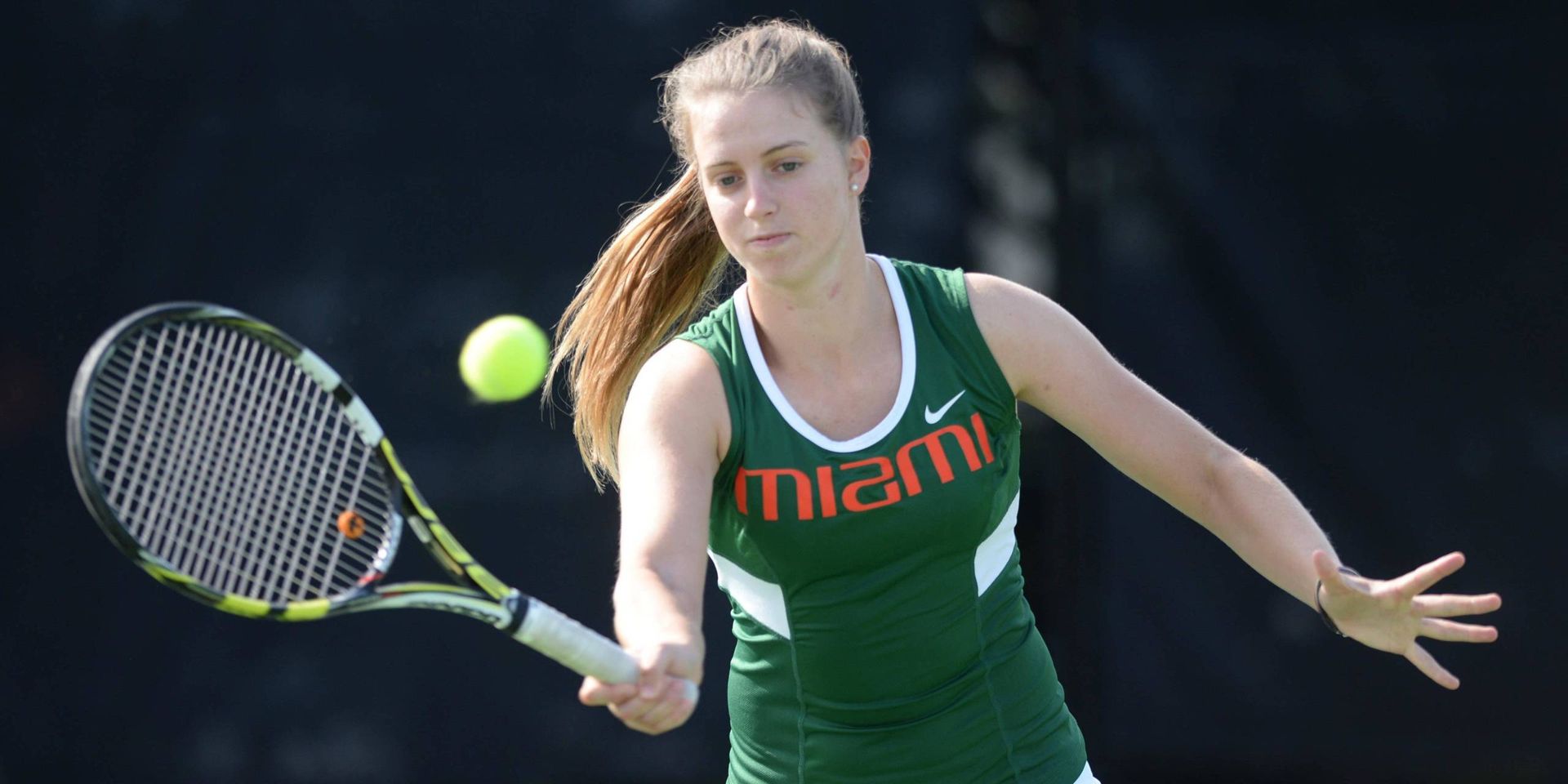 Lohan Stuns No. 5 Herring in NCAA First Round

WACO, Texas – Both members of the University of Miami women’s tennis team in the NCAA Singles Championship won in straight sets in the first round of the tournament Wednesday at the Hurd Tennis Center.

“I just think it was a great first day of tennis,” Miami head coach Paige Yaroshuk-Tews said. “We had two tough first round opponents in Shankle, playing on her home court, and Herring, obviously one of the best players in the country. The girls showed up, were real focused, and played clean tennis.”

The ACC Freshman of the Year, Lohan got off to a hot start, breaking Herring’s serve to begin the match and then holding to go up 2-0. After Herring rebounded to make it 2-1, Lohan took over the rest of the first set. She won four straight games to take the opening set in dominant fashion, 6-1.

Herring, a singles All-American for the third straight year and the 2014 SEC Player of the Year, came out strong in the second set and won the first two games. However, Lohan would not relent, winning each of the next three to take the lead.

The two then traded games back and forth until it was 5-4 in favor of Lohan. Herring, who helped Georgia reach the semifinals of the NCAA Team Championship, was serving to even the score, but Lohan broke yet again to clinch the victory, 6-1, 6-4.

“We talked about just making good choices from beginning to end and I think that Sinead is starting to understand just how effective that can be, when she plays with that level of discipline in her game,” Yaroshuk-Tews said. “She played an incredibly clean match, a smart match. She made one bad decision in two sets and that just shows you how important the mental side of this game is.”

Lohan was one of just four players to defeat a seeded opponent in the first round and one of only three freshmen in the nation to reach the round of 32. Her win is also the first by a Hurricane over an opponent ranked in the top five in the nation since Wagner defeated third-ranked Julia Elbaba of Virginia April 20, 2014.

“I knew Lauren Herring was going to be a very tough opponent and I knew going into the match I would have to fight for every point in order to be successful,” Lohan said. “I [did fight] hard for every point, I did what the coaches were telling me all week, and I think that my fitness really showed today from all the hard work I was putting in all year.”

Wagner, an All-American and First Team All-ACC selection, downed Shankle in Waco in straight sets for the second time this season. The match began with the two splitting the first four games, but Wagner won four of the next five to take the opening set, 6-3.

Shankle took the initial game in the second set, yet Wagner followed that by winning three straight, capping the third with an ace. After Shankle got within a game, Wagner took three in a row once again to seal the deal and win 6-3, 6-2.

“Steffi moved very well today. Trying to beat Shankle, it’s a little uncomfortable,”  Yaroshuk-Tews said. “. . . I think Steffi is one of the passers in this tournament, so Shankle moving forward and using her slice didn’t really affect Steffi today. Steffi was able to really keep Shankle also a little uncomfortable with her power.”

Not only did the Hurricanes win both their matches Wednesday, but Lohan and Wagner dropped a total of just five games each. Miami is one of only nine schools in the country to have multiple players reach the second round. Both of them will now meet a player from a fellow ACC school Thursday in the round of 32.

Additionally, Wagner will pair with senior Lina Lileikite in the NCAA Doubles Championship and they will face Georgia’s Herring and Ellen Perez in the first round at 6:00 p.m. ET. Wagner is one of just 17 players in the nation remaining in both fields.

To keep up with the Hurricanes during the NCAA Championships, as well as to learn more about University of Miami women’s tennis, follow @HurricaneTennis.