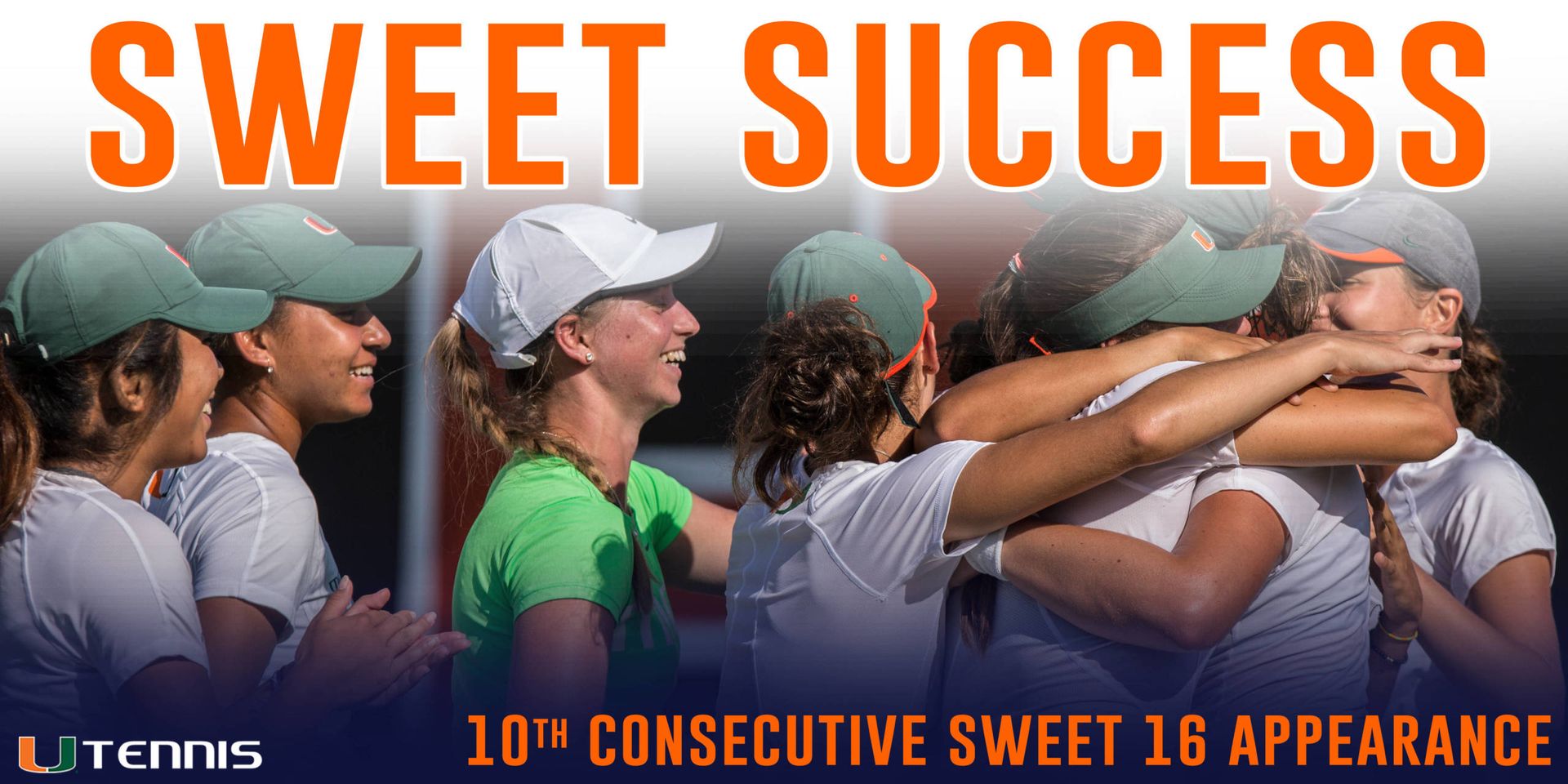 CORAL GABLES, Fla. – With a 4-3 comeback victory over Ole Miss Saturday evening, the University of Miami women’s tennis team advanced to the Sweet 16 of the NCAA Team Championship for the 10th season in a row.

The 15th-ranked and 15th-seeded Hurricanes dropped the doubles point and then charged back to defeat No. 23 Ole Miss at the Neil Schiff Tennis Center in thrilling fashion.

“We like to say that pressure is a privilege and that’s a big thing that we’ve talked about this year,” Miami head coach Paige Yaroshuk-Tews said. “. . . Because you’re good and because you’re Miami, these numbers are on you and we’re kind of the targets. Ten is a big number and I’m pretty fired up. I’m excited to get it into double digits.”

“The job at that moment is calm them down, get them focused, get them on target, get them believing in themselves, and put it behind them,” Yaroshuk-Tews said of her meeting with the team before singles play. “It’s easy to say, it’s not always to do in this situation, but today they were able to do it.”

Her words to the team seemed to work, as the Hurricanes opened up strong in singles action and won the first set on four of the six courts.

Miami grabbed a 2-1 lead over the Rebels when the first two singles matches to finish went its way. Lohan, ranked No. 37, won the final five games of her match against No. 82 Arianne Hartono to pick up a 6-1, 6-3 victory and claim her 20th singles win of the season. Albuquerque, playing in her final home match, took down Verboven, 6-4, 6-1, to put the Hurricanes in front.

Soon after, Ole Miss leveled the match at two with a 6-3, 6-3 victory by Suk over No. 115 Lileikite. The score would not remain tied for long though, as No. 108 Zhang concluded an impressive performance against Stephens, taking the match 6-2, 6-3.

The score then came even for a third time when El Kamash posted a 6-4, 6-3 win against Fuentes to make it 3-3. The focus then shifted to the main court and the matchup 2015 All-Americans, No. 11 Wagner of Miami and No. 10 Jones of Ole Miss.

After taking the first set in dominant fashion, 6-1, Wagner trailed 5-3 in set two and Jones was serving for the set. The First Team All-ACC selection not only broke Jones’ serve, but she won each of the next three games as well to pick up a 6-1, 7-5 victory and clinch the match for the Hurricanes.

With her teammates cheering her on from the adjacent court, Wagner did not concede a point in the final game. The win was her third over a top-10 singles opponent in 2014-15 and her second career dual match win against a top-10 player.

“I just tried to stay calm and fight, that’s all,” Wagner said. “[I was thinking], ‘Don’t commit a lot of unforced errors, trust my game, just get back to five-all, and then take it.’”

The win over the Rebels marked the third time this season that Miami has dropped the doubles point and still come away with a victory. The Hurricanes are 3-1 the last four times their opponent took the doubles point.

Miami will take on either North Carolina, both seeded and ranked second on the nation, or No. 31 Dartmouth in the Sweet 16 Friday, May 15 in Waco, Texas.

To keep up with the Hurricanes throughout the NCAA Team Championship, as well as to learn more about University of Miami women’s tennis, follow @HurricaneTennis.