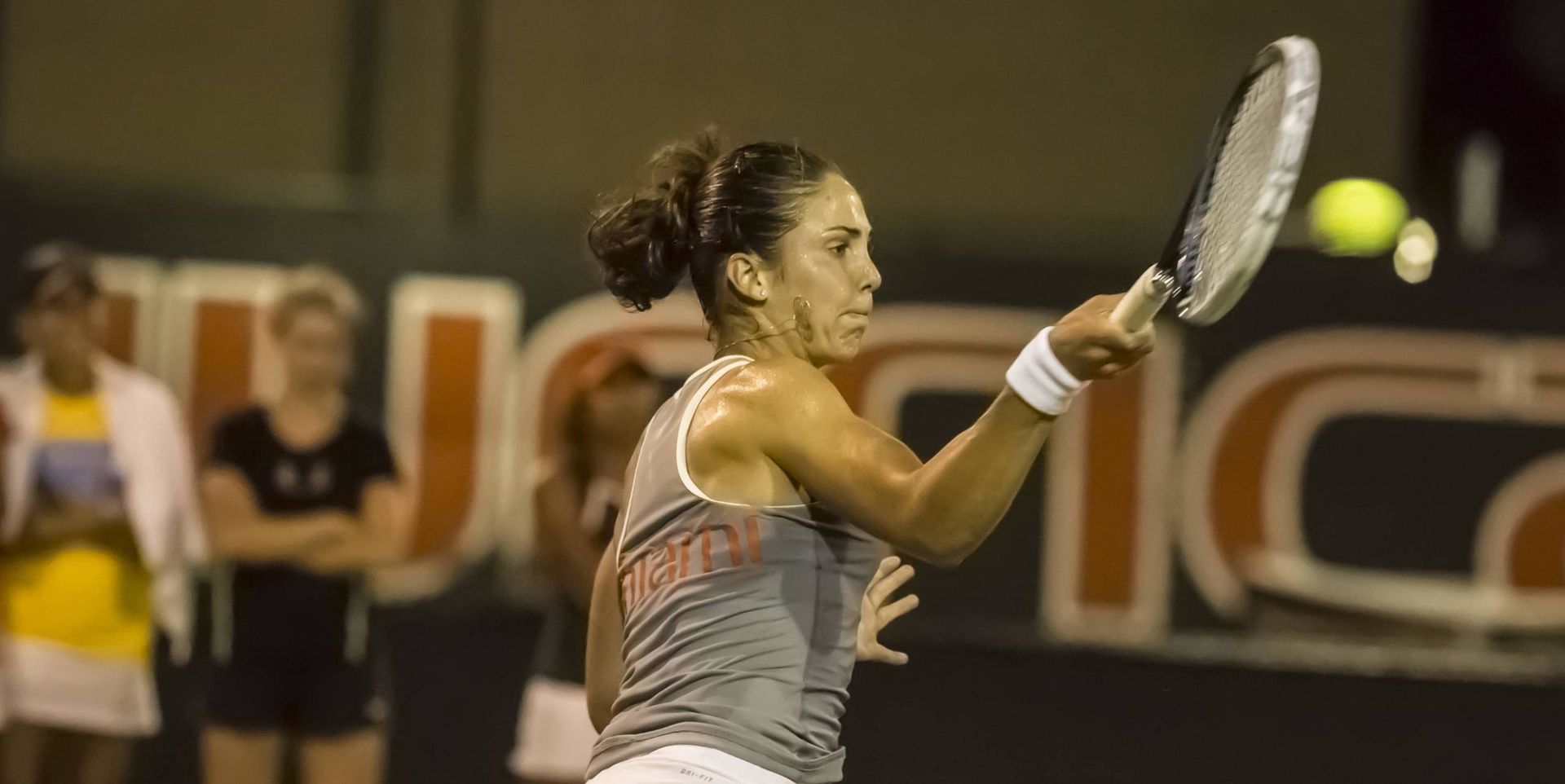 @HurricaneTennis Drops Match to No. 2 UNC

CORAL GABLES, Fla. – The University of Miami women’s tennis team put up a tremendous effort against undefeated, second-ranked North Carolina Saturday at the Neil Schiff Tennis Center, but came up short of a victory.

The Tar Heels won 5-2 to snap Miami’s 24-match home winning streak. The Hurricanes had not lost in Coral Gables since April 12, 2013, an impressive stretch that lasted nearly two years.

“Once again, UNC played well in the big moments. The matches where we’ve taken down UNC we’ve put our foot on the gas while in the lead and today it looked like we were in control [in singles] on courts three, four, five, and six at the beginning of the match . . . but credit to UNC,” Miami head coach Paige Yaroshuk-Tews said. “Tough team, good competitors, played good doubles today, which I think was kind of the decisive part of the match.”

Miami (12-5, 8-2 ACC) struck first in doubles action, as senior Lina Lileikite and freshman Wendy Zhang knocked off No. 34 Kate Vialle and Ashley Dai, 8-4. After trailing 2-0, the Hurricane duo won eight of the next 10 games to take the match.

When Lileikite and Zhang got the win, Miami trailed 7-4 in both remaining matches and North Carolina (23-0, 11-0 ACC) closed them both out to win the doubles point.

The Hurricanes quickly evened the score in singles play behind a dominant showing from Silvia Fuentes. The freshman picked up her first career win over a ranked opponent, rolling to a 6-2, 6-2 victory over No. 72 Kay.

“Silvia played a great match today,” Yaroshuk-Tews said. “We obviously have a lot of belief in her and we know that she’s capable of playing like that and doing that and she’s been a player that’s proven to want to play in the big moments and I’m happy to see a freshman out there getting it done like that today.”

North Carolina regained the lead when No. 17 Carter defeated No. 36 Lohan, 6-2, 6-1. Not long after, Miami tied the match yet again behind another milestone victory, this one from Albuquerque.

The Porto Alegre, Brazil native got a dual match victory over a top-100 opponent for the first time in her Miami career, as she took down No. 78 Ashley Dai in stellar fashion, 6-4, 6-4.

“Monique was undefeated the whole season last year at number six, so she’s proven to be a very good singles player . . . and we gave her rest a couple weeks ago,” Yaroshuk-Tews said. “She had some things going on that she got worked out and it’s nice to see that she has that bounce back in her step and she’s playing great tennis. It’s nice to have a senior down there leading the way, so it’s good to see.”

After evening the score at two, Miami was unable to come up with another point, as the Tar Heels won each of the three remaining matches. Ninth-ranked Loeb defeated sixth-ranked Wagner, 7-5, 6-1, to put North Carolina back in front. No. 18 Price then won 7-6 (7-5), 6-4 over No. 125 Lileikite to clinch the victory for the visitors.

The Hurricanes are now one of three teams with two losses in the ACC, but defeated both of the other schools. They won 5-2 at Virginia March 27 and 6-1 over Duke just two days ago.

To keep up with the action during those matches, as well as for more information on University of Miami women’s tennis, follow @HurricaneTennis.