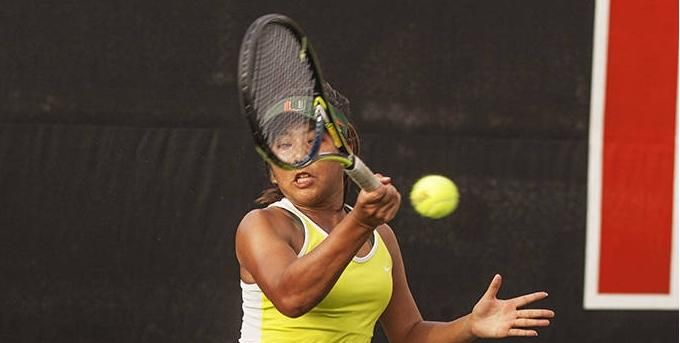 @HurricaneTennis Wins 5-2 at No. 8 Virginia

The 16th-ranked Hurricanes improved their ACC record to a perfect 7-0 and notched their third top-15 victory of the year with a 5-2 win over the Cavaliers at Boar’s Head Sports Club. It marked just the second home loss of the season for Virginia (12-4, 5-2 ACC) and first ACC home loss by multiple points since March 8, 2014.

“We fought our tails off for almost seven hours to bring this one in and I couldn’t be any prouder of this group,” Miami head coach Paige Yaroshuk-Tews said. “We’ve made some minor changes these past few weeks and they paid off today.”

Miami (11-3, 7-0 ACC) opened the day by winning the doubles point in thrilling fashion. Virginia took the first match, an 8-5 victory by the 27th-ranked pair of Skylar Morton and Cassie Mercer over freshman Sinead Lohan and junior Stephanie Wagner.

Needing to win each of the remaining two matches, Miami did just that. First, senior Monique Albuquerque and junior Clementina Riobueno, ranked No. 29, won 8-5 over Stephanie Nauta and Danielle Collins.

In the final match, junior Lina Lileikite and freshman Wendy Zhang trailed 4-1, but fought their way back to clinch the doubles point for Miami. The duo won seven of the final eight games to take down Julia Elbaba and Maci Epstein, 8-5, and put the Hurricanes in front.

Singles action began with Virginia evening the score, as third-ranked Elbaba defeated Wagner, ranked seventh, 6-2, 6-0, avenging one of her only three dual match losses of the 2014 season.

Miami retook the lead behind an impressive performance from Lohan, ranked No. 36. The Waterford, Ireland native picked up the second highest ranked win of her career and the highest of the spring season, defeating the 31st-ranked Collins, who won the NCAA Singles Championship in 2014.

Virginia then once again tied the match, as Morton won 6-0, 7-5 over No. 125 Lileikite, but the score would not remain even for long.

Riobueno won a tough three-set match against No. 34 Nauta, 7-6 (7-5), 5-7, 6-3. After splitting the first two sets, the Barquisimeto, Venezuela native jumped out to a 4-0 edge in the final set en route to the win. Nauta is the highest ranked opponent Riobueno has defeated in her career in dual match play.

To win the match, the Hurricanes needed a victory from one of its freshmen, No. 96 Zhang or Silvia Fuentes—and they got both.

“Our freshman brought in three of our points today in singles which is pretty spectacular,” Yaroshuk-Tews said. “The poise we had in tough times was incredible today.  I really think today shows how hard this team has been working on their mental side of the sport.  Dr. [Rob] Seifer and his efforts combined with our team buying in to the plan placed in front of them paid huge dividends tonight.”

After playing for over six and a half hours Friday with just three courts available indoors, the Hurricanes will be back in action Sunday at 10:00 a.m. at No. 47 Virginia Tech in Blacksburg, Va. Live stats and live video for the match can be found HERE.

To track the action on Twitter, as well as learn more about University of Miami women’s tennis, follow @HurricaneTennis.