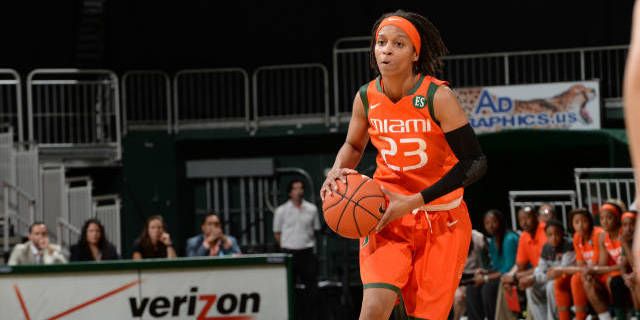 “I’m thrilled for Adrienne. It’s a well-deserved honor and great to get that kind of recognition in the nation’s best conference,” Miami head coach Katie Meier said when Motley was honored last week. “She’s a team player and her focus is 100 percent on how to make Miami win. She’s been doing a great job of not only leading this team, but also of sharing the basketball and doing whatever it takes to win.”

In 31 games this season, Motley has recorded double digits in the scoring column 27 times and has been held under eight points just twice all season. On 22 occasions she has posted 15-plus points.

Motley is the sixth player in the program’s 11 years in the Atlantic Coast Conference to be selected First Team All-ACC and she is just the second to be tabbed as a sophomore, along with Shenise Johnson (2009-10).

The Newport News, Va. native is the lone player who ranks top 15 in the ACC in points per game, field goal percentage and free throw percentage. Her 48.9 percent clip from the floor is top three in the conference among both guards and players under six-foot, and 14th overall.

Motley is sixth in the conference in scoring and 12th in free throw percentage. Her 1.3 assist/turnover ratio would rank 11th if she qualified.

On Jan. 12, Motley was named both the espnW National Player of the Week and the ACC Player of the Week. The honors came after leading the Hurricanes to a 78-63 victory over fourth-ranked Notre Dame and a 62-45 win at Virginia Tech. Motley scored a career-high 32 points on 13-of-19 (68.4 percent) shooting against the Fighting Irish, who are now 56-1 in conference play and conference tournaments over the last three seasons, with the loss to Miami the lone blemish.

“It’s definitely a blessing just to know all the hard work and all the time spent in the gym has been paying off and I couldn’t do it without my teammates or the coaches,” Motley said of her initial First Team All-ACC honor last week.

The Hurricanes finished play at the ACC Tournament Friday and sit at 19-12 (8-8) on the season despite playing 20 games against teams in the top 120 of the RPI, including eight in the top 20.