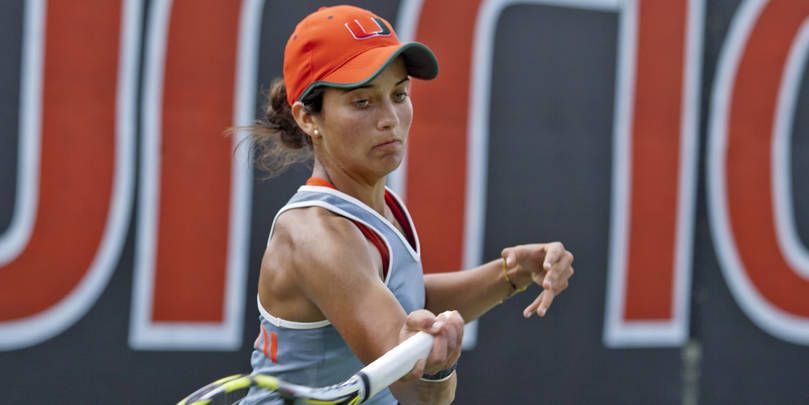 @HurricaneTennis Tops BC, Moves to 4-0 in ACC

The Hurricanes have now won all four of their ACC matches and have picked up 26 of the available 28 points in the process.

“Today was an interesting day for us,” Miami head coach Paige Yaroshuk-Tews said. “I think the trip took its toll on some of us out there. We played a combination of some outstanding tennis and some real horrible tennis and we were simply tough enough in the end to find a way to win as a team.”

No. 14 Miami (8-2, 4-0 ACC) opened up the action with a stellar doubles performance from its two ranked pairs. First, the seventh-ranked duo of senior Lina Lileikite and junior Stephanie Wagner took down Lexi Borr and Jessica Wacnik, 8-3.

The Hurricanes then clinched the doubles point when the No. 17 pair of senior Monique Albuquerque and junior Clementina Riobueno defeated Aisya Dair and Jennifer Ren, 8-3. Freshmen Sinead Lohan and Wendy Zhang trailed 6-5 against Emily Safron and Katya Vasilyev when play ended.

No. 45 Boston College (7-6, 1-2 ACC) opened singles play by evening the score at one when Asiya Dair defeated No. 90 Zhang, 6-1, 6-0, marking the first time this season in conference play that Miami dropped a point. The Hurricanes quickly responded though and regained control of the match.

Despite the fact that her match did not start until about two hours after the first four singles matches began, it was Riobueno who was the third player to win a singles point. The Barquisimeto, Venezuela native quickly rolled past Emily Safron, 6-0, 6-0, showing the type of play that led to her winning ACC Player of the Week just five days earlier.

Leading 3-1 and needing just one more victory to clinch the match, it was Lohan, ranked No. 45, who sealed the deal. Showing poise beyond her years, Lohan won the second set 6-1 after dropping the first set in a tiebreaker and then battled back in the third set to clinch the win.

Lohan was one game from defeat, trailing 5-3 in set three against Lexi Borr, but impressively managed to rattle off five straight wins for a 6-7 (8-6), 6-1, 7-5 victory, despite not having her finest performance.

“Sinead fought extremely hard, but didn’t play great,” Yaroshuk-Tews said. “These are the days where character is built. She should have never lost the first set, but once she did, she did a good job of figuring things out.”

With the result of the match already decided, the Eagles picked up a second point when Katya Vasilyev defeated No. 84 Lileikite, narrowly winning, 4-6, 6-4, 7-6 (7-5).

The final match of the day was between Albuquerque and Heini Salonen and the pair played an eight-game pro set, with Albuquerque picking up an 8-2 win to give the Hurricanes the 5-2 victory.

Miami will not play again for another week, as the Hurricanes’ next match will be at Georgia Tech Sunday, March 15 at 10:30 a.m.