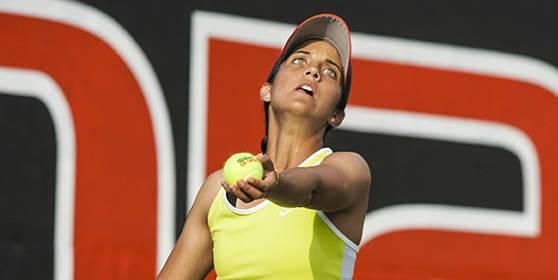 CORAL GABLES, Fla. – The University of Miami women’s tennis team rolled past Clemson in its second ACC match of the season.

The No. 20 Hurricanes defeated the No. 14 Tigers 7-0 Sunday at the Neil Schiff Tennis Center.

“We were playing every point with high intensity and trying to stay aggressive,” Riobueno said. “We were coming into the net and finishing the points there. I think we were doing a really good job in the baseline setting up the person that was at the net.”

For the second consecutive match the remaining doubles pairs raced to clinch the doubles point for Miami. It was the freshman tandem of Sinead Lohan and Wendy Zhang who sealed the deal, defeating Daniela Ruiz and Joana Eidukonyte 8-4.

As Lohan and Zhang wrapped up the doubles point against Clemson (7-5, 3-1 ACC), the seventh-ranked duo of senior Lina Lileikite and junior Stephanie Wagner was poised to take down the nation’s top-ranked doubles pair of Jessy Rompies and Beatrice Gumulya.

Lileikite and Wagner trailed 2-4 and won five-straight games as the match finished 7-4, with the duo just two points away from a match victory.

Miami clinched its victory against Clemson with an impressive win by Lohan. The freshman, ranked No. 45, defeated No. 58 Romy Koelzer 6-4, 7-5. Minutes later, freshman Silvia Fuentes earned the Hurricanes their fifth point, forcing an error by Daniela Ruiz and earning a 6-4, 6-4 victory.

The Tigers forced the final two singles matches into a third set. In a much-anticipated number one singles matchup, No. 10 Wagner dropped the first set to No. 20 Joana Eidukonyte 4-6. Wagner stayed tough and won the second set 6-4 and then won a tiebreaker 10-4 to clinch a victory.

Playing a full third set, No. 84 Lileikite won the last match of the day against No. 82 Beatrice Gumulya 6-3, 2-6, 6-4, as her teammates cheered her on standing besides court three.

“We played some great tennis today. Mentally and physically we were on point,” Miami head coach Paige Yaroshuk-Tews said. “Clemson is a good team that is tough to take down 7-0. That was the goal and we were able to execute.”