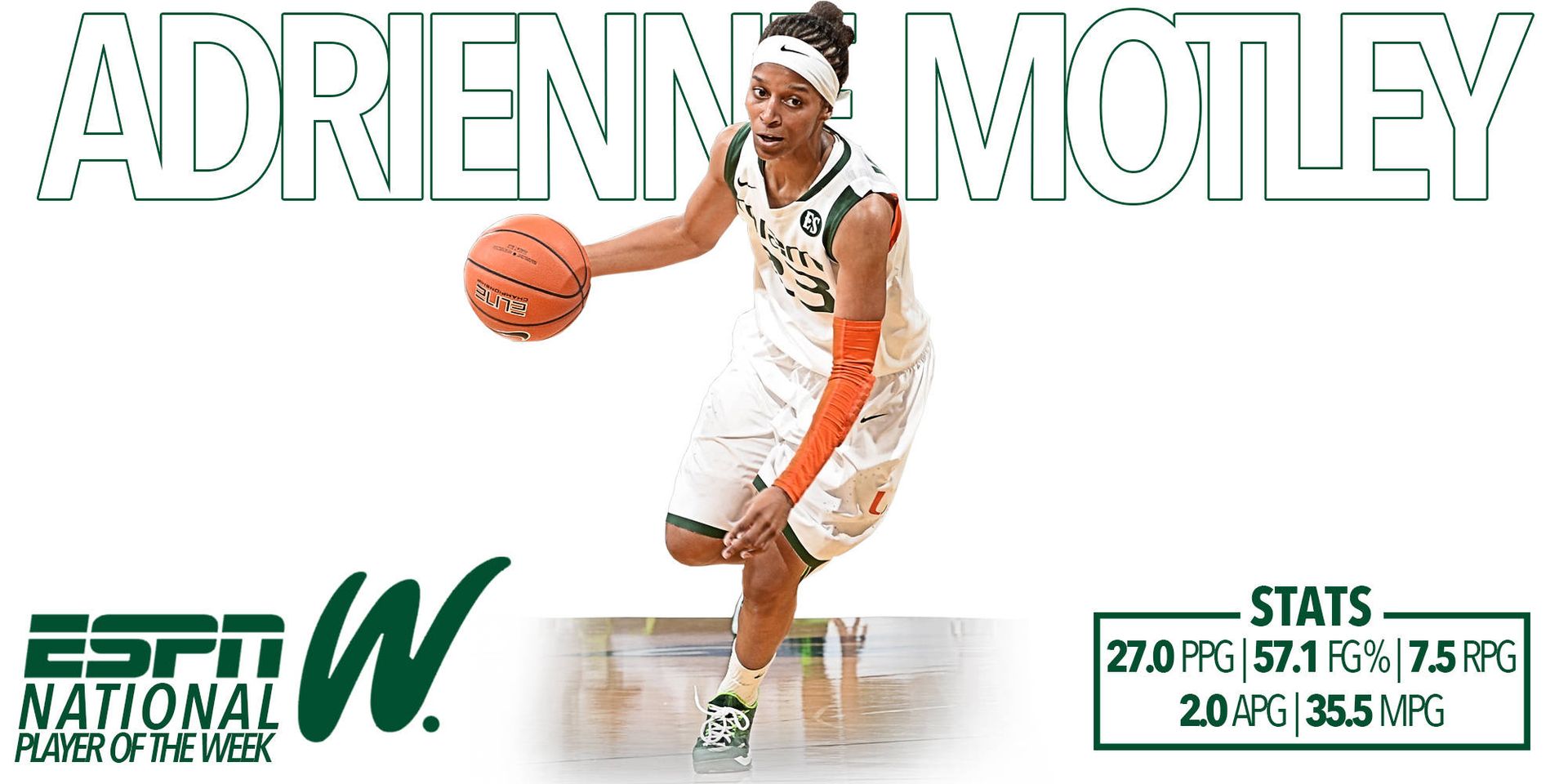 BRISTOL, Conn. (espnW) – Not since Stanford upended Connecticut in the first few days of the season has a resulted stopped women’s basketball watchers cold as this one did: Miami 78, Notre Dame 63.

The unranked Hurricanes didn’t just knock off the fourth-ranked team in the country — they knocked down the Irish. The upset snapped Notre Dame’s streak of 30 consecutive road victories and ended the Irish’s 21-0 run in the ACC since joining the conference a season ago.

No one played a bigger part than sophomore guard Adrienne Motley, who put up a career-high 32 points in a game that now earns her a turn in the national spotlight.

Motley, espnw’s national player of the week, and Miami showed no letdown three days later, hitting the road to defeat Virginia Tech 62-45. Motley, a Newport News, Virginia, native who was playing just a few hours from home, finished with 22 points and pushed her team to a 3-0 start in ACC play.

Miami coach Katie Meier was impressed Motley was able to be such a factor against Virginia Tech, especially since the Hokies were keying on her after Thursday’s performance.

“I think her effort [Sunday], the fact that she dropped 22 when they were giving her a ton of attention, just shows you what a great player she is,” Meier said. “She is playing like an All-American right now.”

Motley, a 5-foot-9 guard, has scored in double figures in 15 of Miami’s 16 games, including the past 14. She has scored at least 20 points seven times.

Against Virginia Tech, she pulled down a career-high eight rebounds. Motley is averaging a team-leading 17.3 points per game and 24.0 PPG in three ACC contests thus far. She ranks in the top 10 in the ACC in scoring (fifth), field goal percentage (6th, .553) and free throw percentage (8th, .842).

Against the Irish, Motley was 13-of-19 from the floor and propelled the Hurricanes to a 20-point halftime lead. Her 32-point effort marked the first time that a Miami player had scored 30-plus points since Riquna Williams had 34 in a win over Maryland on Jan. 12, 2012.