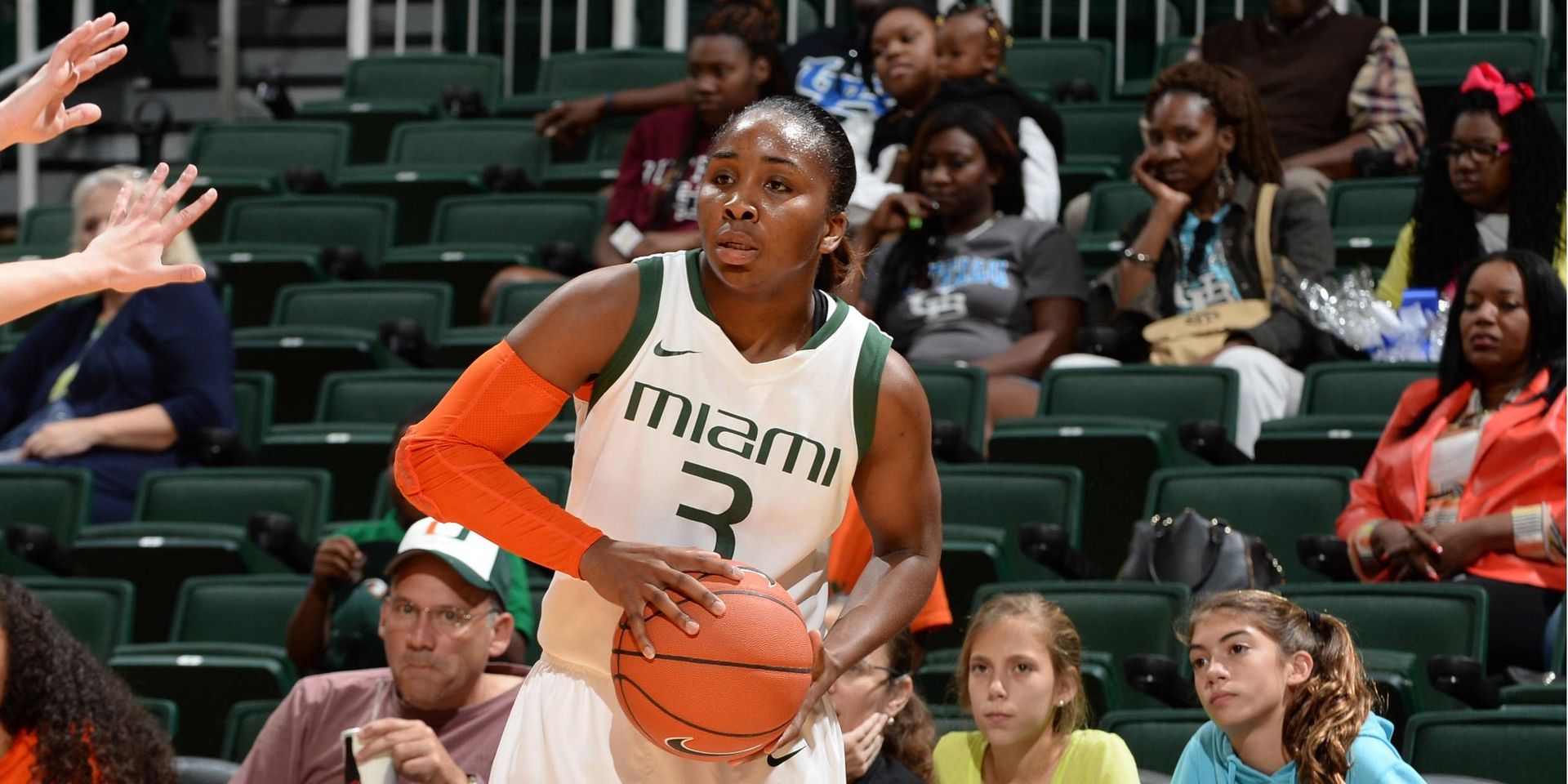 CORAL GABLES, Fla. – For the first time in the last four games, the University of Miami did not open up the scoring.

Instead, the Hurricanes reeled off a 20-0 run against Jacksonville after conceding the first two points of the contest and rolled from there to a 65-36 win.

Miami (6-2) did not allow Jacksonville (2-5) to make a field goal until 4:25 was left in the first half, a stretch of over 15 and a half minutes. The Dolphins made just one more field goal before the break, and entered the locker room shooting 2-of-21 (9.5 percent) from the floor.

“Credit to my team, it was a quick turnaround. We played with as much defensive energy as we played with all year, but we played great team defense,” UM head coach Katie Meier said. “As a coach, team offense, they’ll buy into, but getting a team to buy into team defense isn’t always easy and it’s a lot of work and even when we’re not scoring, like the start of the game, just like at Middle Tennessee, we’ve never pouted and had a defensive hangover from our offense and that’s really impressive, especially for a young team. So, obviously they care about each other this team, and I care about them deeply and I’m really proud.”

The Hurricanes forced 19 turnovers in the first half and turned them into 20 points. This was the second straight game Miami forced 15-plus turnovers and had 17-plus points off turnovers before halftime.  Additionally, Miami had 12 steals in the first 20 minutes and led 28-12 midway through the game.

Adrienne Motley was outstanding in the opening frame, scoring 13 points on 5-of-9 shooting from the field. The sophomore guard scored Miami’s first eight points, and did so in a span of fewer than two minutes, as she hit jump shots on four straight possessions.

“Mot got hot there and I took her out and I was like, ‘Go put your hands in a heating pack, don’t get cold,’ because she was hot,” Meier said with a bit of a laugh. “. . . But that’s the other thing about our team is if somebody’s hot we’re going to give them the ball, and we’re going to pass up shots and give them the ball, and if they cool down, then we’ll adjust.”

Miami’s defensive intensity did not dwindle in the second half, as it limited Jacksonville to just seven points in the first 13 minutes after the break. The Hurricanes also had their offensive get into more of a rhythm after they left the locker room.

The second half scoring included a pair of three-pointers from sophomore guard Jessica Thomas, who connected on three in the game to match a career high.

Erykah Davenport’s solid play down low was a huge boost for the Hurricanes all game long, as the freshman had career highs in points (nine) and rebounds (five). The four made field goals were also a career best for the forward from Tucker, Ga.

“I thought Erykah has been practicing so well and I knew she’d be a big force today,” Meier said. “And so when she came through—and she basically was told, ‘You better come through.’ I don’t treat her as a freshman. I’m like, ‘Here’s the facts. You’ve got size, you’ve got athletic ability and we’re going to go to you and you need to come through.’ And most kids would choke and I thought Erykah showed great maturity and just really came through.”

Junior forward Briona Brown paced the Dolphins with 14 points, but was limited to 3-of-9 shooting from the floor.

Miami will have a full week until its next game, as the Hurricanes will next take the court Saturday, Dec. 13 against Coppin State. The game against the Eagles (1-6) is set for 1:00 p.m. at the BankUnited Center.