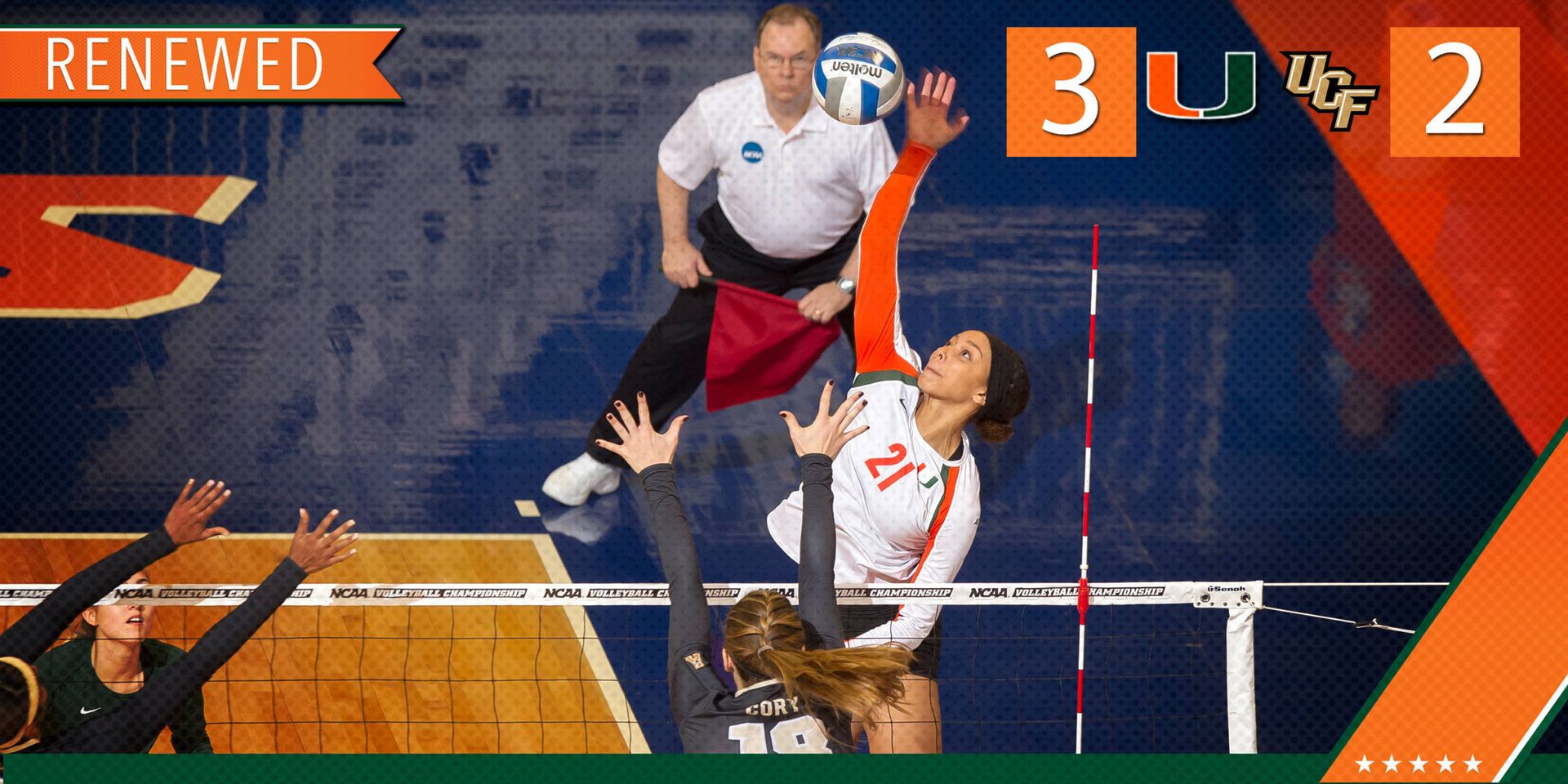 GAINESVILLE, Fla. – A record-setting performance by senior Savanah Leaf helped the University of Miami volleyball team defeat UCF in five sets to advance to the second round of the 2014 NCAA Tournament.

“We think of this as a big win for us,” Gandara said. “I’m extremely proud of this group. It was great to see the girls no only play well and prepare, but also enjoy it. Now we get to get through this one and prepare for the next one. It was a good match for us, and I’m excited about the way we played.”

The Hurricanes (22-8, 14-4 ACC) took a hard-fought opening set, 25-22. Miami’s attack was led by sophomore Kelsie Groot, who picked up five kills while hitting an impressive .556 for the set. Groot was also one of two Canes with a service ace in the first set, joined by Michele Marenus.

The Knights charged out to an early 10-3 lead in the second set and Miami could not even the seven-point deficit, falling 25-18. Leaf was Miami’s top hitter in the second set, adding five kills to head into the break with a team-high eight. The Hurricanes and Knights headed into the intermission tied at 1 set apiece.

Miami charged out to an eight-point lead early in the third set, leading the Knights 9-1. A UCF attack error extended the Hurricane lead to double-digits, 11-1. The Canes finished off a 15-point victory with three straight kills from Taylor Scott, who had four kills in the set. Leaf was a force again on the attack, adding six kills to help Miami gain a 2-1 advantage in the match.

The fourth set was a see-saw battle with no team leading by more than three points at any time. Down 24-22, Miami appeared to drop the fourth set when a UCF attack got thru the block and landed in bounds, but the Canes got within one due to the Knights being out of rotation. The UCF miscue gave the Hurricanes a boost, but the Knights closed out the fourth set, 25-23, forcing a decisive fifth set.

Miami took an early 3-0 lead in the fifth set and never looked back, leading 8-3 when the two teams switched sides. Leaf closed out the victory with kills on Miami’s final two points, tying and then breaking the school record for kills in a match. Leaf, tied the record this year with 30 kills against Florida State on Oct. 5, previously shared the record with Karla Johnson (30 kills against Houston on Sept. 3, 2005).

“We know what our strengths are, ad we know how to play,“ Leaf said. “We just needed to do it. I think we needed to start strong and finish strong and make sure we played to our potential. The main thing going in there was having a consistent mindest and just coming out strong and aggressive.”

Leaf tallied her career-best 31 kills while hitting an impressive .464. The ACC Player of the Year set a Miami record for kills in a NCAA Tournament match, surpassing Lane Carico’s 21 kills against FIU in 2009. She also added six digs, three blocks and three assists in the victory.

“I started off a bit shaky, and I think I just wanted to pick it up and leave it all out there because this could’ve been my last game,” Leaf said. “Being a senior, that’s really important to me to make sure that IU play my best at all times.”

Taylor Scott and Groot joined Leaf with double-digit kills against the Knights. Scott recorded a double-double, finishing with 14 kills and a team-high 18 digs, while Groot added 13 kills, two blocks and an ace.

Haley Templeton dished out 52 assists, one shy of tying her career-best, while helping Miami hit .302 as a team. The freshman setter added five digs, three kills and an ace against the Knights.

The Canes, who are 4-6 all-time in the NCAA Tournament, will face No. 8 Florida who beat Alabama State in three sets. The Hurricanes are 3-5 all-time against the Gators.

“I think we just have to focus on ourselves,” Groot said. “ If we play like we know we can and just serve well and play defense and take big swings and just come together as a team and bring the same intensity, I think we can do it. We just need to keep our emotions under control.”