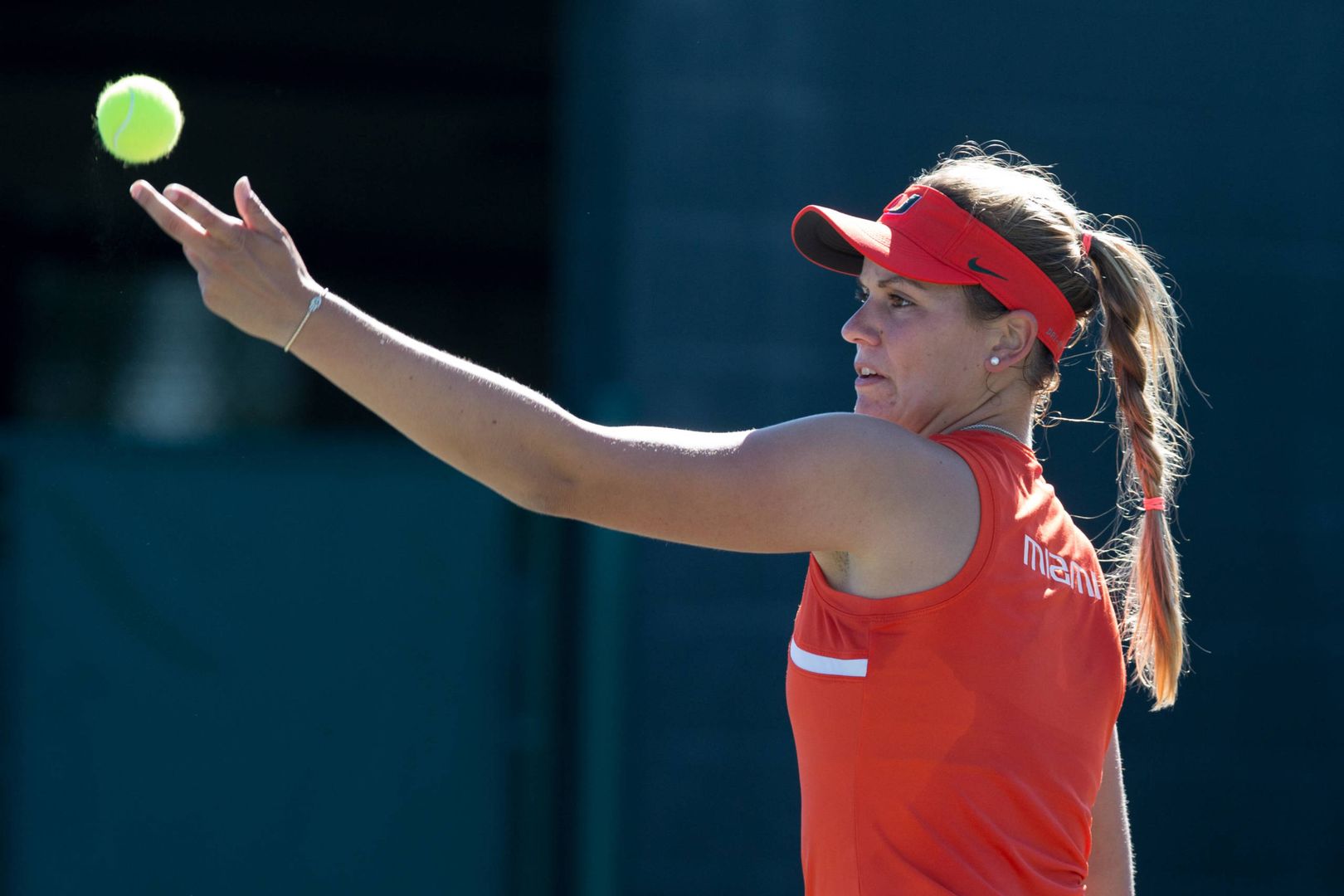 Canes Advance in Singles and Doubles at NIIC

FLUSHING, N.Y. – Junior Stephanie Wagner picked up a pair of victories at the USTA/ITA National Indoor Intercollegiate Championships Thursday, one in the Singles Main Draw and one with teammate Lina Lileikite in the Doubles Main Draw.

Wagner, ranked No. 18, started her day at the USTA Billie Jean King Tennis Center with a singles match against Jessica Wacnik of Boston College and advanced to the round of 16 with a hard fought victory. The pair split the first two sets, but Wagner edged her opponent in the final set for a 6-4, 3-6, 6-4 victory.

“Stephanie looks like she is fighting harder than ever which makes me believe she can do some damage in this tournament,” UM assistant coach Laura Vallverdu said.

Hours after completing her singles match, Wagner teamed with her senior teammate, Lileikite, to face Michigan’s Emina Bektas and Alexandria Najarian in the Doubles Main Draw. Although it was not easy, the duo did manage to advance in straight sets, taking the match 6-3, 7-6 (5). After receiving a first round bye, Wagner and Lileikite are now onto the quarterfinals.

“Doubles was fun and enjoyable to watch,” Vallverdu said. “They are defining themselves and staying in doubles patterns.”

Wagner’s Singles Main Draw match will take place at 9:00 a.m. Friday and she will take on the No. 2 seed, seventh-ranked Chanelle Van Nguyen of UCLA. She will then join forces with Lileikite at 5:00 p.m. in a doubles match against the No. 2 seed in the Doubles Main Draw, sixth-ranked Auburn’s Pleun Burgmans and Emily Flickinger.

After their quality showings day one of the tournament, Vallverdu would like to see Wagner and Lileikite play with a similar approach the second day.

“Girls competed hard and were brave on their first day out there,” Vallverdu said. “Looking for mental toughness and maturity tomorrow in regards of a potential long day of tennis.”

Live score updates from Friday’s play will be available at the official ITA event page.

The USTA/ITA National Indoor Intercollegiate Championships serves as the culmination of the fall college tennis season. The event features a 32-player singles draw and a 20-team doubles draw for both men and women. Twenty schools are represented in the women’s singles draw.

Stay up to date with the action this week at @ITAtennis and follow the hashtag #NationalIndoors on Twitter. Also, follow @HurricaneTennis for the latest news and notes from the Miami women’s tennis team.