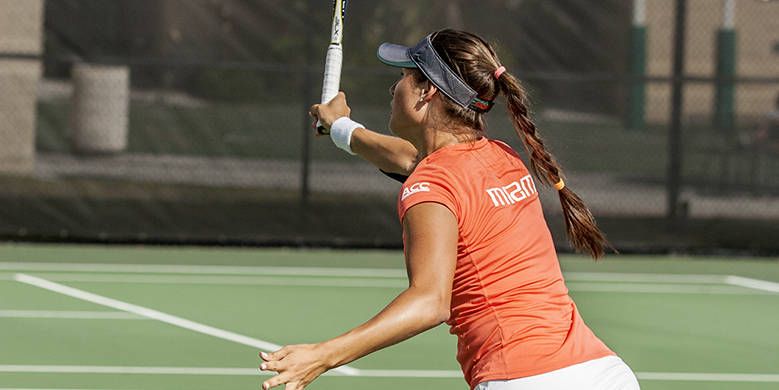 CORAL GABLES, Fla. – The first day of the Miami Fall Invite was cut short due to inclement weather. Only one round of doubles was completed before play was stopped.

Third-ranked and top-seeded Monique Albuquerque and Clementina Riobueno opened up the tournament with an 8-4 win against Pittsburgh’s Lolade Ogungbesan and Katherine Castro in the orange doubles flight. The Canes duo will face Auburn’s Paula de Man and Michala Kucharova in the semifinals Saturday.

Also in the orange doubles bracket, Stephanie Wagner and Lina Lileikite cruised to an 8-3 win in their opening round match against Pittsburgh’s Audrey Ann Blakely and Callie Frey. Wagner and Lileikite will face Auburn’s Emily Flickinger and Pleun Burgmans in the bottom half of the Saturday orange doubles flight semifinal.

In the green doubles bracket, freshmen Silvia Fuentes and Judith Bohnenkamp, playing in their first match together, fell 8-3 to Auburn’s MK Lewis and Andie Dikosavljevic. They are scheduled to face Pittsburgh’s Molly Wickman and UNF’s Michelle Valdez in the consolation semifinal tomorrow.

Hurricanes freshmen Wendy Zhang and Sinead Lohan picked up their first win of the tournament in an 8-5 victory against UNF’s Esther Zuniga and Quetzali Vazquez. Zhang and Lohan will play Amber Washington and Amanda Wickman from Pittsburgh tomorrow in the semifinal of the green doubles flight.

Saturday at the Miami Fall Invite will be a jam-packed day with two more rounds of doubles and the first two rounds of singles. Play will begin at 8 a.m.