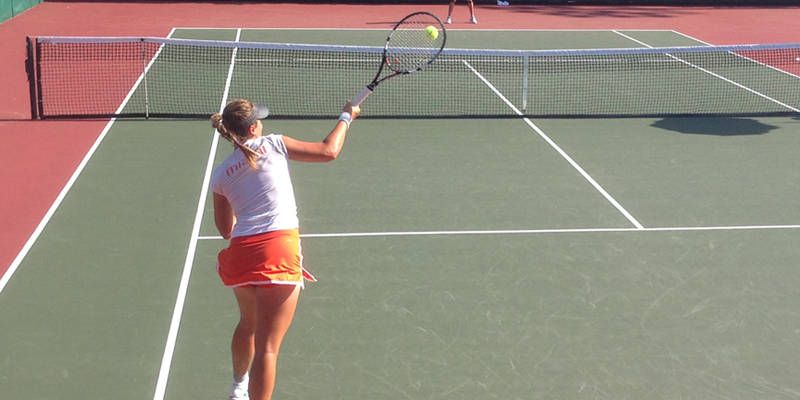 Wagner Falls to #5 Capra in NCAA Second Round

ATHENS, Ga. — No. 29 Stephanie Wagner was eliminated from the NCAA Singles Championship on Thursday morning after suffering a 7-6(3), 6-4 loss to No. 5 Beatrice Capra in the second round.

The top singles players from Duke and Miami battled in a tight first set, with Capra eventually winning in a tiebreaker.

Wagner held 2-1 and 3-2 leads in the first set before Capra rattled off a pair of consecutive wins to take a 4-3 advantage.

The Hurricane sophomore from Amberg, Germany evened the match 4-4 before Capra, an All-ACC selection, took back the lead 5-4.

With her back against the wall, Wagner stayed composed and evened the match once again after leading 40-15. The back and forth set continued with Capra once again taking the lead–this time at 6-5.

With the first set on the line, Wagner put together what was arguably her best game of the match, winning at love to tie the set 6-6 and force a tiebreaker. In the tiebreaker, Capra bested Wagner by a score of 7-3 to take a one-set advantage in the match.

In the second frame, the pair went back and forth once again until Capra broke a 2-2 tie by a winning the next three games to take a three-game lead in the set. Down 5-2, Wagner used an ace out wide and an angled backhand to win the game and begin chipping away at the deficit.

Still down by two games, Wagner started showing off her big forehand down 5-3, and after three consecutive hammered balls to Capra’s forehand, Wagner took a 15-0 lead in the game. After winning at deuce and taking the advantage, Wagner used one more monster forehand to win her second straight game.

Now just a game behind, Wagner went down 30-0 and then 40-30, where she held off Capra’s first attempt at match point with a forehand winner. After forcing deuce, Capra took the advantage once again, and just like the last time, Wagner held her off. Back once again at deuce, Wagner caught some bad luck when a shot nipped the white of the net and rolled back on the Miami side. Wagner couldn’t hold off Capra’s third match point attempt, signaling the win for the Duke sophomore.

The loss to Capra ends Wagner’s impressive sophomore campaign, where she finished with a 22-7 record.

“Were really looking forward to see her take the next step in these next two years,” Yaroshuk-Tews said.  “With the necessary work, Wagner will develop into one of the premier players in the country.”

For more information on the women’s tennis team as they begin the doubles portion of the NCAA Championship, follow @HurricaneTennis on Twitter.