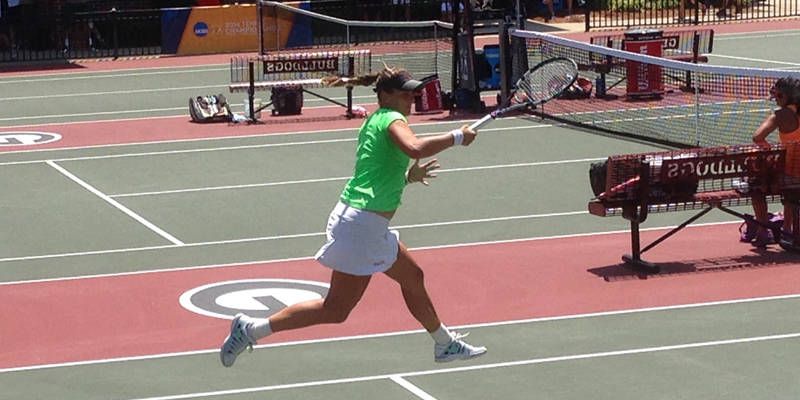 ATHENS, Ga. — 29th-ranked Stephanie Wagner rolled past No. 16 Brianna Morgan of Florida Wednesday to advance to the NCAA Singles Second Round.

The Hurricanes sophomore won nine straight games over two sets to put away the Gators’ top player 6-1, 6-2. The win for Wagner marks her 22nd win of the season and sixth against a nationally ranked opponent.

“It was a great start to the tournament,” head coach Paige Yaroshuk-Tews said. “It was a good match to get her teeth into the draw. We’re looking forward to a big day tomorrow.”

After going up 2-0 in the first, Wagner couldn’t break Morgan’s serve and surrendered the first game to the Florida sophomore.

That’s when Wagner started her run. Leading 2-1 and serving with the advantage, Wagner sent an ace to the outside past Morgan to take a 3-1 lead and capture a surge of momentum.

The sophomore from Amberg, Germany won the next four in a row to close out the first set in dominant fashion,and then kept her momentum going in the second, opening the frame with five more wins.

Up 5-0 in the second set and receiving serve for the match, Morgan held off a match point from Wagner and won her first game of the second. In the ensuing game, Morgan broke Wagner’s serve for the first time all day, reducing her deficit to 5-2.

After losing two games in a row, Wagner closed the door. With the game even at 15-15, Wagner won the next three points to close out the match.

Wagner now advances to the second round on Thursday, where she will face the winner of Duke’s Beatrice Capra and Pepperdine’s Lorraine Guillermo.  Match times for the singles second round as well as the first round of doubles haven’t yet been assigned.