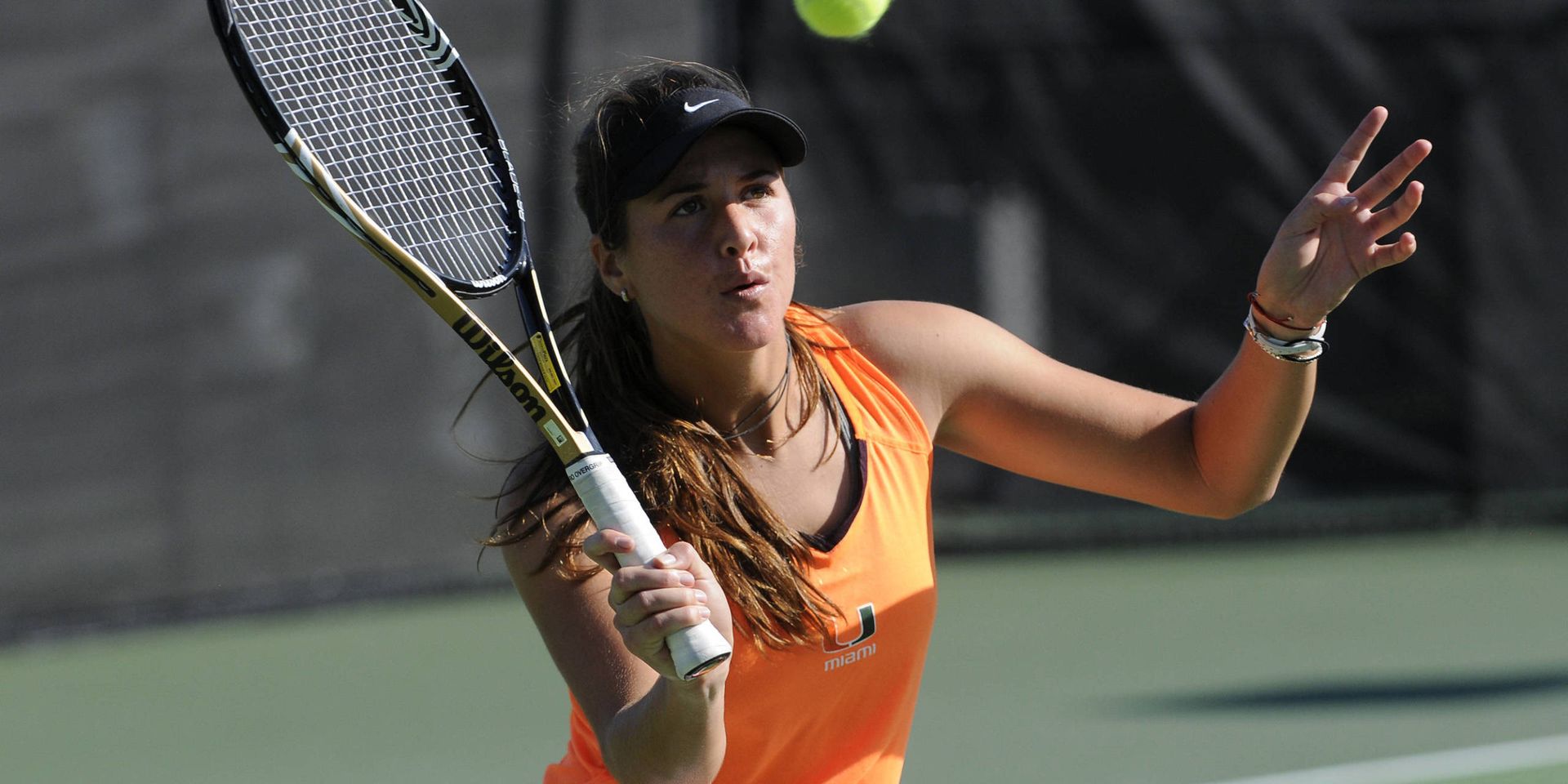 No. 12 WTennis Advances to NCAA Second Round

CORAL GABLES, Fla. – The No. 12 University of Miami women’s tennis team advanced to the second round of the NCAA tournament with a 4-0 sweep of Boston University Friday afternoon.

As hosts of the opening round for the 10th straight season, the Hurricanes proved once again why they are among the top teams in the nation.

Miami (20-5) spent little time putting away the Terriers in doubles, taking a 1-0 lead on the scoreboard less than a half hour into the match.

“I was really impressed with one, two and three doubles,” Paige Yaroshuk-Tews said. “They were very thorough and they had the mentality of wanting to win every single point, and I felt that from all three courts.”

The Hurricanes won the first 18 games combined between the three matches, getting out to 5-0, 7-0 and 6-0 leads. In their first match together all season, Brittany Dubins and Melissa Bolivar were too much for Boston University’s Lauren Davis and Barbara Rodriguez—dominating the Terrier duo 8-0.

“I was very impressed with two doubles, having not played together all season—they looked like they didn’t miss a beat,” Yaroshuk-Tews said.

Stephanie Wagner and Lina Lileikite raced out to a 6-0 lead in their match against Boston’s Kim McCallum and Madison Craft before dropping their first game. Leading 7-1 and with one doubles also closing in on a win, Wagner and Lileikite finished off the pair of Terriers 8-1.

At one doubles, eighth-ranked Monique Albuquerque and Clementina Riobueno played sound tennis throughout their match against Boston’s Johanna Hyoty and Leonie-Charlotte Athanasiadis, but couldn’t put them away fast enough. The Hurricanes top duo led the match 6-0 when it was stopped when Miami earned the doubles point.

In singles, the Hurricanes picked up opening-set wins in all six matches and positioned themselves well to close out some wins in the second frames.

Playing three singles, Lileikite was the first to put Miami on the board in straight sets 6-1, 6-2 over Athanasiadis. After opening up the match with a 6-1 first-set win, Lileikite went down 1-2 in the second. The Latvian junior rebounded nicely and closed out the match with five consecutive wins.

Playing in her first singles match since March 23 against Wake Forest, Dubins was impressive in her 6-1, 6-1 win against Boston’s Kim McCallum.  Dubins led 2-1 in the first set and continued to pull away throughout the match.

“Brittany stood out to me today,” Yaroshuk-Tews said. “She stayed calm, was in control of her emotions, and was very coachable. That’s where you need to be as a senior this time of year.”

Recording the fourth point on the board for Miami and a trip to the NCAA second round, No. 29 Wagner dismissed Johanna Hyoty in straight sets 6-2, 6-1. Wagner built early leads in each of the sets to cruise to her sixth consecutive win.

Two singles, four singles and five singles each went unfinished, but Miami held leads in all three positions. Playing two singles for the first time this season, Riobueno played a solid match against Lauren Davis, holding a 6-1, 4-1 lead when the match was stopped.

“Clementina raised her level today as well,” Yaroshuk-Tews said. “She played a great match and she’s going to have to continue that moving forward.”

Bolivar took her opening set against Rodriguez 6-3 before falling behind 2-3 in the second when the match was cut short. Albuquerque was well on her way to her 18th straight win, leading McCallum 6-4, 4-2 when the match ended.

The Hurricanes advance to play Oklahoma tomorrow at 2 p.m. for a trip to the Sweet 16. The 18th-ranked Sooners topped No. 55 Wichita State today by a score of 4-2.

“I know Oklahoma is a solid, well-coached team,” Yaroshuk-Tews said. “But we need to play our tennis and make sure that we do a good job of staying on task with our game plans.”