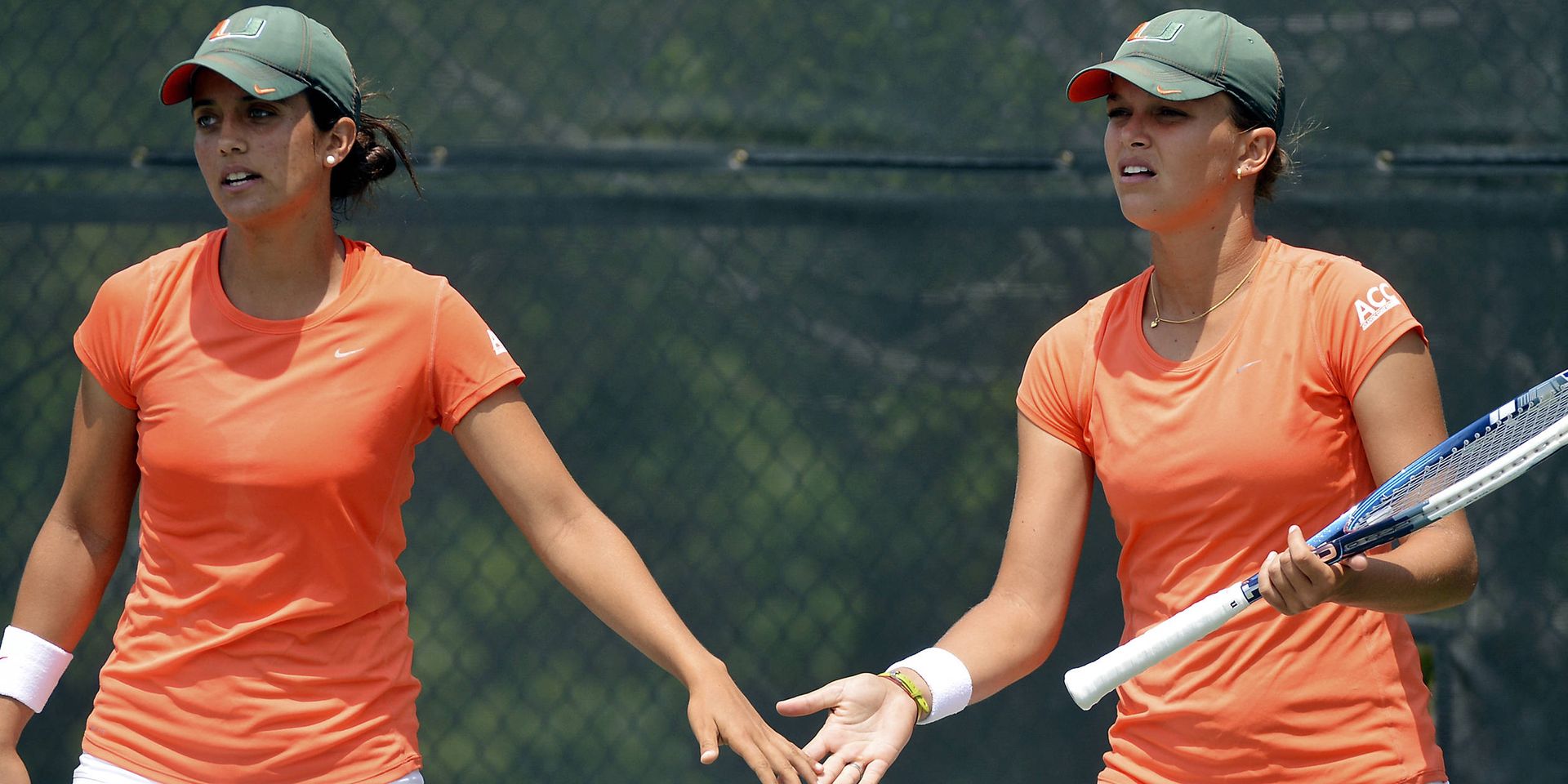 The 7 hour and 48 minute marathon of a match started just before noon, but inclement weather and a change in facilities made it an eventful day. Doubles play and a portion of singles was played at the outdoor Cary Tennis Complex but after the match was twice delayed for rain and lightning, play was shifted to North Carolina’s Cone-Kenfield Indoor Tennis Center.

” The ladies figured out a way to win today in tough conditions,” head coach Paige Yaroshuk-Tews said. “The dynamic of our match changed considerably when we went inside, but we were able to find a way through it.”

Miami (19-4) got off to a slow start in doubles but was able to turn up the intensity and play well enough to take the doubles point.

The first doubles team to take down the Irish was Stephanie Wagner and Lina Lileikite’s three doubles team. The Miami duo led 4-1 before Notre Dame came back to tie it up 4-4. Leading 7-6, Wagner and Lileikite put it away, signaling the 8-6 win.

The first two games at one doubles were a battle, lasting over 10 minutes each. Notre Dame took the first game before Miami came back to win three in a row to take a 3-1 lead. 11th-ranked Clementina Riobueno and Monique Albuquerque would take five out of the next six games to take over the match and win by a score of 8-2 against 15th-ranked Britney Sanders and Quinn Gleason.

Kelsey Laurente and Melissa Bolivar, who arguably played the best doubles match of the afternoon, held a 5-4 lead when Miami won the doubles point and the match was stopped.

Leading 1-0 heading into singles, the Hurricanes took first set leads from Wagner at one singles, Riobueno at four singles and Albuquerque at six singles.

At that point, clouds and thunder began to make their way to the tennis center and, at 2:07 p.m., all matches were stopped. Play was scheduled to begin at 5 p.m. back at the Cary Tennis Center, but as soon as players returned to the courts to warm up, the weather turned for the worse once again.

The Canes then made the 25-minute drive to Cone-Kenfield Tennis Center, North Carolina’s indoor tennis facility. At 6 p.m., the three hour and fifty-three minute rain delay was over and the Hurricanes and Irish were back at it again.

Albuquerque was the first to close out her match and give the Hurricanes a 2-0 lead. Taking the first set 6-3, and with the match tied 1-1 in the second when play resumed indoors, Albuquerque won five out of six games to win the match in straight sets 6-3, 6-2. For Albuquerque it was her 17th straight win and 15th in a row against ACC opponents.

No. 30 Wagner opened up her match with a dominant 6-2 first set performance. After the rain delay, Wagner led Notre Dame’s Britney Sanders 4-3 in the second in need of just two games to complete the win. Wagner and Sanders battled back and forth indoors, with Wagner prevailing in a 7-6 win.

61st-ranked Laurente dropped her match to No. 39 Quinn Gleason, 7-6, 7-6. With the first set knotted up 6-6 when bad weather hit, it took Laurente a while to get her rhythm back. Gleason won the first set tiebreaker when play resumed indoors and took a 4-0 lead in the second. Laurente then began her relentless comeback, tying the match before falling 7-6 in the second.

After getting off to a great start and winning the first set 6-1 against Notre Dame’s Monica Robinson, Riobueno fell in the next two sets each by a score of 6-4.

Leading the Irish 3-2, the Hurricanes once again relied on Bolivar like they have so many times before. The senior didn’t disappoint, coming from a set behind to win the second and third sets 6-4 and 6-2 to clinch the win for Miami.

“Melissa hung in there and fought well today,” Yaroshuk-Tews said. “Would have liked to see her finish in in two sets, but we’ll definitely take it in three.”

Lileikite and Jennifer Kellner’s match went unfinished at three singles. Lileikite won the first set 7-6 before battling in the second, where the score ended up 6-5 in favor of Notre Dame.

The Hurricanes will play in the semifinals tomorrow at 2 p.m. against Virginia. The Cavaliers defeated Georgia Tech tonight 4-1 in the quarterfinals.