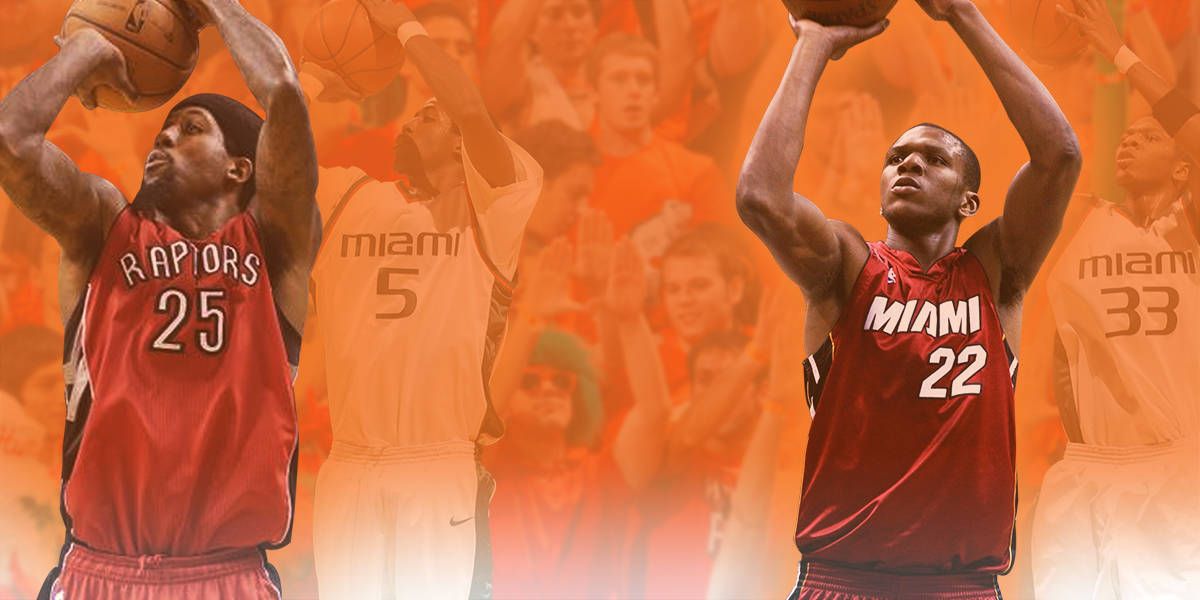 Former teammates James Jones and John Salmons, who led the University of Miami basketball team to the Sweet 16 of the 2000 NCAA Tournament, faced off professionally on Monday, March 31, when the Toronto Raptors traveled to take on the Miami Heat at the AmericanAirlines Arena in Miami.

JAMES JONES (PRE-GAME INTERVIEW)
HurricaneSports.com: What’s it mean to re-unite with John Salmons, a former teammate that you haven’t seen in a while?
James Jones: I am always excited to see John play, but more importantly when I get a chance to play against him and compete and share the court with him. We share some fond memories together back from our time at the University of Miami. A lot of the time back there in the Hecht, in the weight room, in the summer working on our game, just spending time working together as players and as men. John is a great friend. He’s actually a role model for me. He paved the path to the NBA before I did, and was close enough for me to observe and understand what he did to get there. I’m always grateful and he knows that for the example he set.

HS.com: It’s been over a decade since you both played together, what does it mean for you to have someone that you can compete against occasionally that you played with in college?
JJ: I think it just reiterates the quality of players that Coach Hamilton recruited to the university back when he was there. Myself and John stand as two guys from that era and over a decade later, we’re still competing with teams that have a chance to be successful and win in the post-season which is why you play professional athletics. It’s a testament to the hard work of both he and I, but also to the foundation and support we received from our coaches, our teammates, and our University.

HS.com: You’re working your way back into more playing time. What’s that mean for you?
JJ: It’s just another day at the office. I’m just glad and thrilled that I can help my team. You play this game, and you come in every day and you’re trying to get better, so if your number is called, you’re ready. Anytime I play at home, I know it’s special, because these times are few.

JOHN SALMONS (PRE-GAME INTERVIEW)
HurricaneSports.com: You played college basketball with James Jones. What does it mean to return to Miami?
John Salmons: It’s always fun to come back where it all started at least from college to the pros. It’s nice to see some old friends and also take in this nice weather.

HS.com: James Jones mentioned that you were a mentor and a role model to him. What’s it like to play against someone that you helped grow and develop as a player, James Jones?
JS: James Jones is my brother for life. He’s a great guy. I am happy for his success. We had a lot of battles together in school. We played three years together. I am definitely happy to see how far he has come since he came in as a freshman.

HS.com: You and James played for @CanesHoops a decade ago. What does that mean that you have both been in the NBA since?
JS: It means a lot. We’re trying to hold it down for The U. I think we’re doing a good job of that. Hopefully, we get some more guys coming in. I think we are in the right direction of doing that. Hopefully we can just continue the success that we have from last year. We should continue the success we had from the previous year, and we struggled a little bit this year, but hopefully we will get it back going again.

HS.com: What does it mean to have you and James Jones represent the University of Miami on one court tonight?
JS: It means a lot. We have Larkin now. Hopefully, we get some more guys in the league. There are a lot of Kentucky guys on this team that are always talking. Hopefully, we can continue representing The U for as long as possible until new guys come in.

The Miami Heat held on and won the game with a final score of 93-83.

James Jones continued on his late-season hot streak, playing 25 minutes in the game. He scored eight points that night, hitting two 3-point shots and also went 2-for-2 from the free throw line. In addition, he totaled four defensive rebounds.

John Salmons finished the game playing 19 minutes and scoring two points. He also provided the Raptors with three assists and two steals throughout the game.

JAMES JONES (POST-GAME INTERVIEW)
HurricaneSports.com: What is it like to get back in the game and have more playing time?
James Jones: I look at it like a 15 minute rotation. It’s always great to play. As a player, you want to play, you’re excited to play. Playing is out of your control, and you just have to manage and control what you can. For me, it is working and doing the stuff necessary so that my teammates have the confidence when I am thrust in that situation. These guys believe in me. These guys expect me to perform. That’s what drives me to make sure I do not let them down.

HS.com: You said you look at it like it is only a 15 minute rotation. You played 25 minutes. How do you feel?
JJ: I feel great. If I can’t play 24 minutes then I am not doing my job very well.

HS.com: What is the role that you have with the younger guys on this team? We touched on the role that Salmons had on you, but what it is it like to be on the other end?
JJ: It is a blessing. It is humbling. Sitting and looking back 10 years ago, this was a dream for me to make it to the NBA and to be able to walk around say, “Hey, I have done some special things. I have accomplished a lot at the highest level.” If I can get that back either by example or by word, that is what I am obligated to do.

HS.com: What are your thoughts and expectations moving forward into the season?
JJ: I don’t get into expectations. We get into realities. The reality is this team wants to win a Championship. The rest of reality is that we have to get better. We can’t win a Championship the way that we’re playing right now. We have to play better. That is what we have been trying to do the last few weeks, trying to get better every day, and give our best. If we do that, we feel confident that we can hoist that trophy again.

JOHN SALMONS (POST-GAME INTERVIEW)
HurricaneSports.com: What do you take away from your time down here in Miami?
John Salmons: Like I said earlier, it is always good to come back down here. It was a tough game. We had to give ourselves the chance to win. We just got to learn from this game, and keep it moving.

HS.com: You’re currently a mentor to the younger guys on this team. What do you teach your the younger teammates from a game with this outcome?
JS: It’s all about being a professional. Playing the right way, and just sharing my experience.

HS.com: For you personally, what’s the biggest takeaway from this game?
JS: I have got to go back and watch the film to see what I did right and what I did wrong, and just go from there.

HS.com: What did you see out of James Jones tonight?
JS: He hit a couple threes which is to be expected. You definitely can’t leave him open.