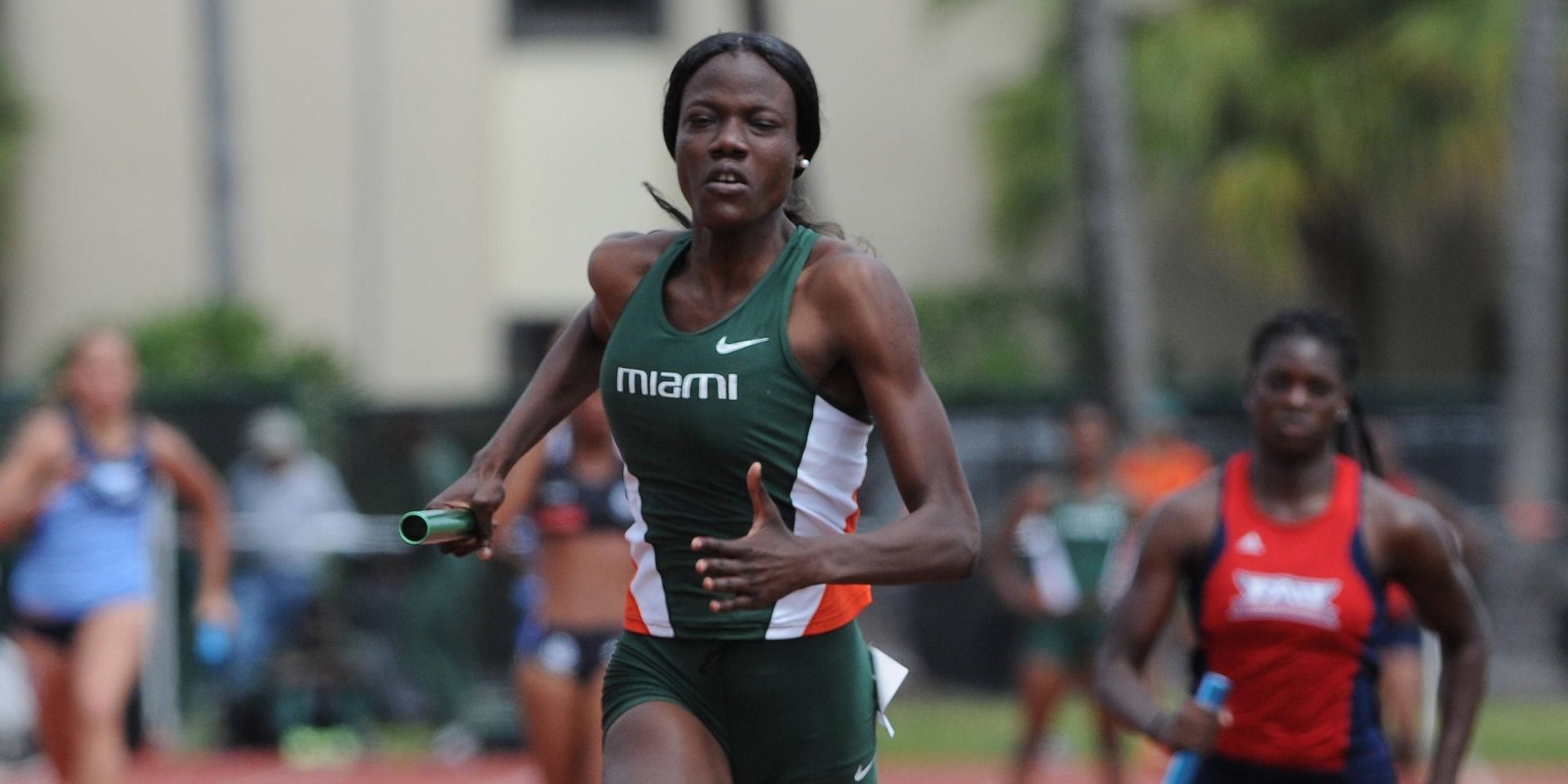 CORAL GABLES, Fla. – The University of Miami has always been known for its success on the track.

But in recent years, Miami track and field has not performed at the elite level that they were known for. That has changed in 2014 as the Canes had five national qualifiers during the indoor season and had a strong showing at the ACC Indoor Championships.

The momentum from Miami’s successful indoor season carried over to the outdoor portion of the schedule. The Hurricane men and women both made their presence known at the 2014 ACC Outdoor Championships as the women secured their highest finish since 2008 and the men tallied their highest team score since joining the ACC in 2004.

Miami’s impressive showing at the conference meet came as a result of contributions from all event areas, but the Hurricanes did a significant amount of their scoring on the track.

The women’s team, who scored 68 points on the final day of competition, surged to a third-place finish with 94 points thanks to four big victories on the track.

Alyssa McClure won the women’s 100m final with a time of 11.62 seconds. The senior picked up 10 important points for the Miami women’s team and contributed towards another first-place finish in the 4x100m relay. She became the third Hurricane to win the women’s 100m dash at the ACC Outdoor Championships, joining Kristy Whyte (2008) and Murielle Ahoure (2009).

The quartet of Kayann Richards, McClure, Jasmyne King and Shakima Wimbley combined to win the women’s 4x100m relay with a time of 45.06 seconds. They are the second 4x100m relay team to win an ACC outdoor championship in school history, joining the 2008 relay team of Tara Thomas, Kristy Whyte, Charlene Fuller and Krista Simkins.

Wimbley also scored points on her own, winning the women’s 200m dash with a personal-best time of 23.12 seconds that ranks fifth in school history and sixth in the NCAA East region. She is the sixth ACC outdoor 200m champ in Miami history, joining Charlette Greggs (2005-06), Simkins (2007), Whyte (2008) and Ahoure (2009). The freshman also placed fourth in the women’s 400m final with a time of 53.013 seconds and helped Miami’s 4x400m relay earn a third place finish.

“Shakima scoring in four events and winning two ACC Championships is great,” Deem said. “She struggled a little bit in the 400, but she came back to run a lifetime-best in the 200 and a monster leg in the 4×400 relay.”

“Jamika in the 400 hurdles is really improving,” Deem said. “I’d like to see her gain some confidence in her other events.”

Middle distance was also a strength for Miami as they had three women qualify for the 800m final. Thandi Stewart led the trio, placing third with a time of 2:05.20 that ties for second in UM history and ranks eighth in the NCAA East region. Alaine Tate also scored for the Canes, finishing seventh with a time of 2:13.56.

“We advanced three people to the 800m final and I had the confidence in them and I knew they could do it,” Deem said. “Seeing them execute and put themselves in that position is something I am very proud of them for.”

The women’s 4x400m relay team of Stewart, Taneisha Cordell, Wimbley and Glades combined to finish third with a season-best time of 3:35.90, picking up the final six points on the track for Miami’s women. The quartet’s time from the ACC Outdoor Championships ranks ninth in the NCAA East region.

In total, the Hurricane women won four of their five individual championships and scored 65 of their 94 points via track events. McClure, Wimbley, Glades, Stewart and the 4x100m relay all earned All-ACC honors for their efforts.

The Miami men also had success on the track, scoring six points en route to their highest point total at the ACC Outdoor Championships since joining the conference a decade ago.

Hurdler TeQuille Jackson snagged three points with a sixth-place finish in the 110m hurdles final. The sophomore also set a new personal-best in the event, running a 14.23 during preliminaries.

Miami’s final three points of the meet came from the men’s 4x400m relay. Josh Johnson, Anthony Wolliston, Bassim El-Sabawi and Joseph Ryan combined to finish sixth with a time of 3:13.75

Also notable for the men, Luke Fontaine’s 5000m time of 14:50.27 moved him into fifth place in school history.

The successful showing on the track is a sign of things to come for the Canes. Miami will look to improve in all aspects of their program as they set their sights on the NCAA East Preliminary scheduled for May 29-31.