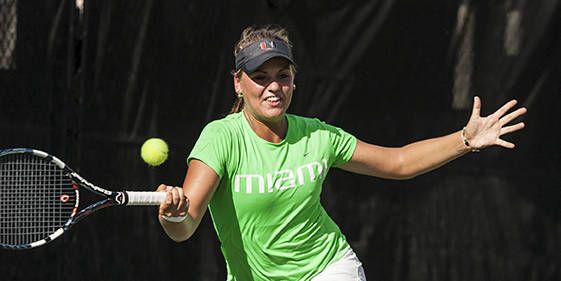 It’s the second consecutive week that Wagner has won Player of the Week honors and the third time this spring. Sharing the honors with Wagner this week is Clemson’s Joana Eidukonyte.

Wagner went 2-0 at No. 1 singles this week with a win against 3rd-ranked Julia Elbaba on Sunday that helped the Hurricanes clinch a share of the ACC regular season championship. After the losing the first set, Wagner got off to a 5-0 start in the second, turning the momentum of the entire match. Wagner won the second set 6-2 and the third set 6-2 to earn the key victory. In doubles, Wagner went 1-0 with Lina Lileikite with a win against Virginia Tech’s Rebecca Harris and Laura Ramthun by an 8-0 score.

With the wins, Wagner improved her spring singles record to 19-4 and 12-2 in the ACC. At the top singles spot, Wagner has posted a 13-2 record and is currently on a four-match win streak.

Wagner and the Hurricanes (18-4, 12-2 ACC) earned a No. 2-seed at the ACC Championships this week and will play in the quarterfinals on Friday at noon. Miami’s possible opponents include Notre Dame, Boston College and Pittsburgh.