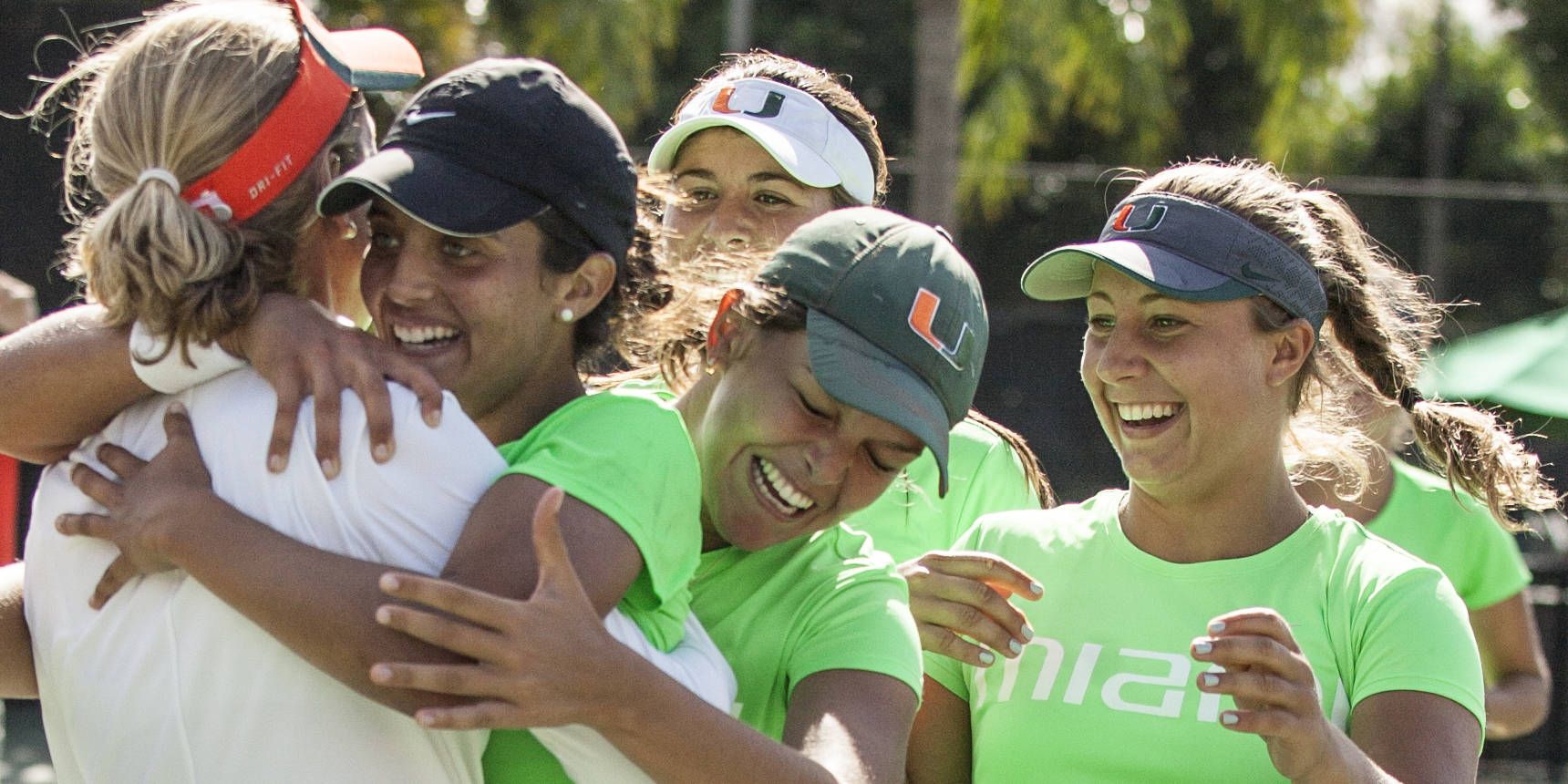 CORAL GABLES, Fla. – The 15th-ranked Miami Hurricanes earned a share of the ACC regular season championship with a thrilling 5-2 win against No. 9 Virginia on Senior Day.

“I couldn’t be happier for the girls,” Paige Yaroshuk-Tews said. “We’ve been working a long time for this win. We kind of had this one, last-shot effort here at home on senior day to end the regular season. It just all came together. The kids played a complete match, from the first point of doubles to the last of singles. I’m really excited for them.”

With Miami (18-4, 12-2 ACC) leading 3-2 and a share of the ACC regular season championship on the line, sophomore Clementina Riobueno came from a set down to win the second and third sets to signal the Hurricanes’ victory.

“I was playing for my seniors,” Riobueno said. “I was just thinking that I had to win this match for Melissa, Brittany and Monique.”

Meanwhile, on court one, No. 36 Stephanie Wagner was on the brink of taking down 3rd-ranked Julia Elbaba, and the momentum only continued to shift in Miami’s favor as the match progressed. After dropping the opening set 6-4, Wagner rebounded phenomenally in the second, winning the first five games. Wagner closed out the second set 6-2 and handedly took the third set 6-4 to earn the win.

“Against these great teams, the window is so small,” Yaroshuk-Tews said. “We played hard tennis for two and a half hours before we got any real looks at shifting the scoreboard. I think Steffi really started the momentum shift of the match when she went up 5-0 in the second set.”

Before singles play began, Miami edged out Virginia at one and two doubles, clinching the doubles point for the 17th time this season.

At one doubles, 20th-ranked Riobueno and Albuquerque jumped out to a 5-1 lead against 11th-ranked Elbaba and Rachel Pierson. The Virginia duo won four of the next five games to get within one point of the Hurricanes, but in thrilling fashion, Albuquerque and Riobueno won the final three games to come away with an 8-5 win.

On the next court over, No. 40 Melissa Bolivar and Kelsey Laurente were battling it out with Virginia’s Li Xi and Stephanie Nauta. Down 2-1 in the match, Miami took a one game advantage 4-3 to take over the momentum. After Virginia came within one game at 7-6, Miami closed out the match by an 8-6 score.

The match with Miami’s Wagner and Lina Lileikite against Virginia’s Danielle Collins and Maci Epstein went unfinished, with the Cavaliers holding a 7-5 lead. Miami trailed 7-3 in the match before starting their comeback to get within 7-5 when the match was stopped.

Heading into singles play with a 1-0 lead, Virginia evened up the match 1-1 after Maci Epstein defeated Miami’s Bolivar in straight sets 6-4, 6-1.

Earning the Hurricanes’ first singles win was Albuquerque, who handled Caryssa Peretz 6-2, 7-5 for her 16th consecutive singles win. After cruising through the opening set and gaining the lead in the second, Albuquerque held off Peretz’ stretch of three straight games won and came away with a 7-5 victory.

Virginia came even with Miami, 2-2 when 33rd-ranked Danielle Collins was able to hold off a great effort from No. 62 Laurente. Despite falling in straight sets, Laurente never trailed by more than a game until the final game of each set.

Moving Miami one step closer to the win was Lileikite, who defeated No. 50 Stephanie Nauta 6-4, 7-5. Lileikite held the advantage for nearly the entire opening set, but the second required a little more work of her. Going back and forth, Lileikite broke a 5-5 tie with two straight games won to earn the victory.

With a piece of the ACC regular season title, the Hurricanes have earned the No. 2 seed at the ACC Championships next week in Cary, N.C.