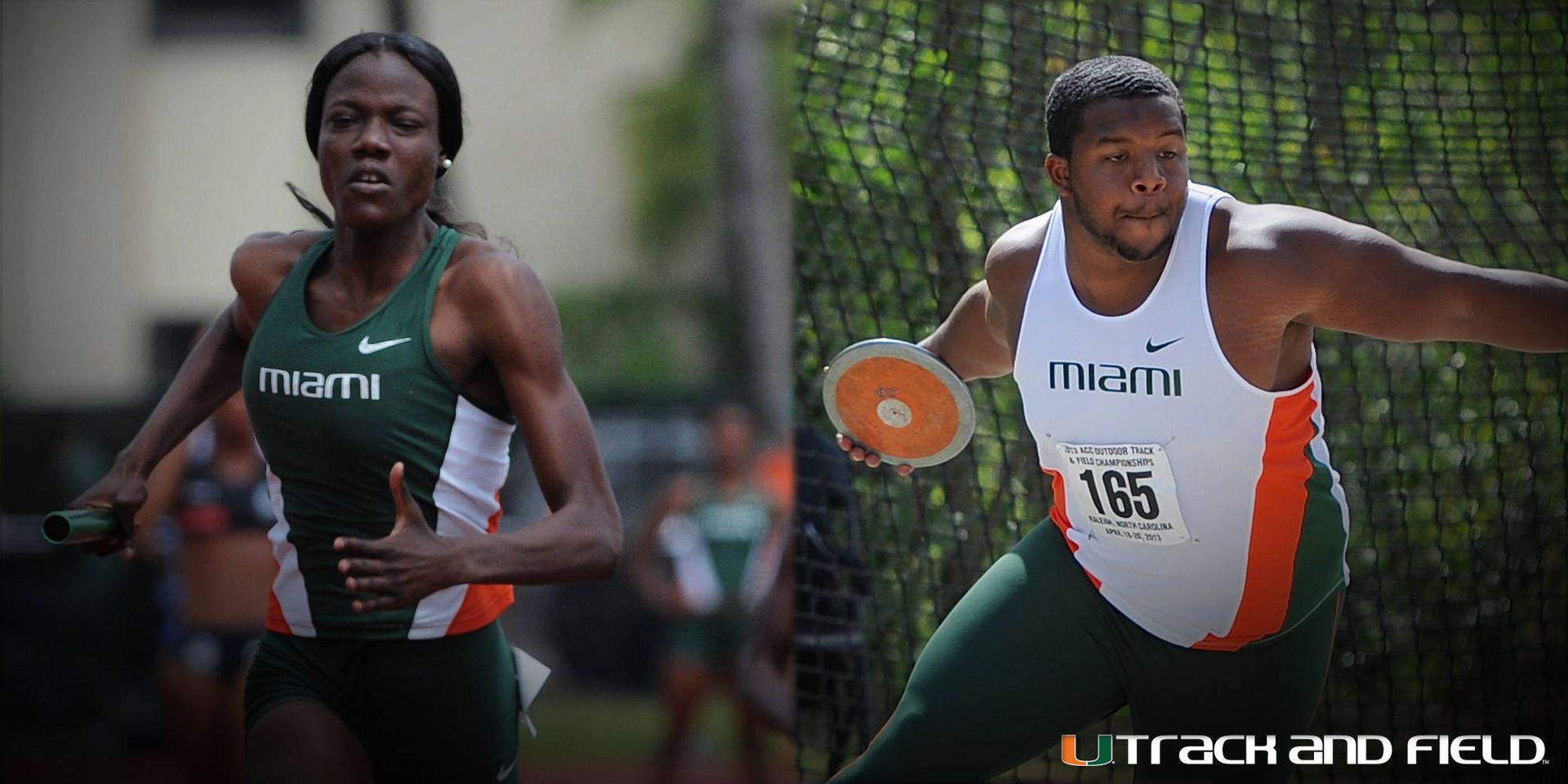 CHAPEL HILL, N.C. – The University of Miami track and field program made its presence known on the final day of the 2014 ACC Outdoor Championships.

Both Miami’s women and men had an impressive list of accomplishments that included the women’s highest finish since 2008 and the most points scored by the men since joining the ACC in 2004. Miami also has the men’s Field MVP for the second consecutive year as Isaiah Simmons claimed the title thanks to an outstanding weekend.

“I thought we had a great day,” Miami director of track and field/cross country Amy Deem said. “We competed very hard, had so many personal-best, ACC Champions and the field MVP. I think our kids really fed off each other and it was exciting. As a coach, one of the best track meets that I’ve been around for a while.”

The women’s team, who entered Saturday in sixth place with 26 points, made a charge up the standings to finish third with 94 points. The Hurricane women earned the team’s highest finish since they placed second in 2008 and scored the most points since putting up 84 in 2010.

“I really think today will go a long way for our future,” Deem said. “I think they got a taste of what it takes to be successful. I think they realize that we are getting back where we need to be. Once you can taste that and see it, it drives you to get there.”

The women secured four victories on Sunday and each win was essential towards Miami’s 68-point day.

Alyssa McClure won the women’s 100m final with a time of 11.62 seconds. The senior picked up 10 important points for the Miami women’s team and contributed towards another first-place finish in the 4x100m relay.

The quartet of Kayann Richards, McClure, Jasmyne King and Shakima Wimbley combined to win the women’s 4x100m relay with a time of 45.06 seconds that scored a key 10 points for the Hurricane women.

Wimbley also scored points on her own, winning the women’s 200m dash with a personal-best time of 23.12 seconds that ranks fifth in school history. The freshman also placed fourth in the women’s 400m final with a time of 53.013 seconds and helped Miami’s 4x400m relay earn a third-place finish.

“Shakima scoring in four events and winning two ACC Championships is great,” Deem said. “She struggled a little but in the 400, but she came back to run a lifetime-best in the 200 and a monster leg in the 4×400 relay.”

“Jamika in the 400 hurdles is really improving,” Deem said. “I’d like to see her gain some confidence in her other events.”

Thandi Stewart led a trio of Canes in the women’s 800m final. The junior placed third with a time of 2:05.20 that ties for second in UM history. Alaine Tate also scored for the Canes, finishing seventh with a time of 2:13.56.

A day after finishing second in women’s shot put, Amber Monroe placed sixth in the women’s discus with a throw of 46.01m. The junior added three points to her team’s total.

The women’s 4x400m relay team of Stewart, Taneisha Cordell, Wimbley and Glades combined to finish third with a season-best time of 3:35.90. The quartet scored the women’s final six points of the 2014 ACC Outdoor Championships.

Dakota Dailey-Harris reached the finals in the women’s high jump, where she placed ninth with a personal-best mark of 1.75m that ranks fourth in UM history.

Miami’s men entered Sunday in ninth place with 17 points, but the Hurricanes finished Sunday with 44 points, the most points scored at the ACC Outdoor Championships in program history. The Canes’ ninth-place finish also ties a program-best since joining the ACC. Miami has now finished ninth six times, including the past two years.

The men’s team got its first points of the day from the jumpers. John-Patrick Friday placed second in the men’s triple jump, while teammate Timothy Richardson finished fifth in the same event. Friday’s mark of 15.34m and Richardson’s mark of 14.79m do not count because the event was moved indoors due to inclement weather. However, the duo picked up 12 points for Miami’s men.

Isaiah Simmons placed second in men’s discus with a mark of 54.53m, while Gian Piero Ragonesi finished eighth with a throw of 51.06m. The duo added nine points to the men’s team total.

“Isaiah has come to ACC Championships twice and been Field MVP both years,” Deem said. “What else can you say about him?”

Also notable for the men, Luke Fontaine’s 5000m time of 14:50.27 moved him into fifth place in school history.

Deem credits her coaching staff for helping the Hurricanes prepare for a big performance at the Belk Track, Fetzer Field and Finley Field on the campus of the University of North Carolina in Chapel Hill, N.C.

“I don’t think we would be where we were today without our staff,” Deem said. “I feel like that has made a difference in getting us where we need to be. They did a great job in getting us here today.”