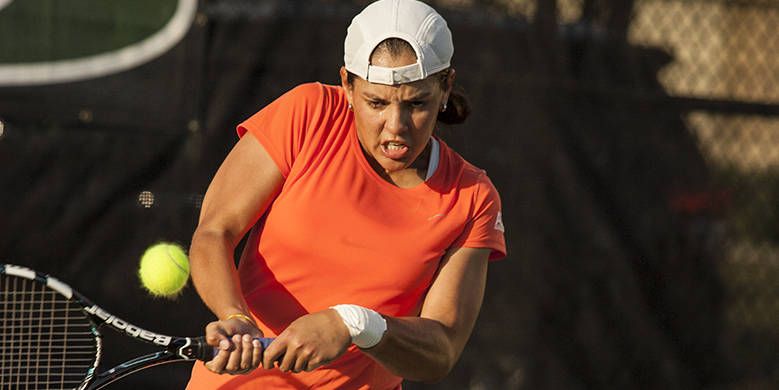 “Today we came out and played good doubles,” assistant coach Laura Vallverdu said. “It’s nice to see two doubles playing better. After doubles, I thought all of the girls came out strong, took care of both sets and looked good physically out there while also getting mentally prepared for Sunday.”

After an afternoon shower delayed the start of doubles, Miami (17-4, 11-2) took the point against the Hokies after only 45 minutes of action.

The Hurricanes returned to the doubles lineup they have relied on for most of the spring, with No. 21 Monique Albuquerque and Clementina Riobueno at the top spot, No. 40 Melissa Bolivar and Kelsey Laurente at two and Stephanie Wagner and Lina Lileikite at the third spot.

Miami jetted out to leads in all three of the matches, but two and three doubles were the first to reach eight wins to earn Miami the doubles point. At two doubles, Bolivar and Laurente opened up the match with six straight wins before Raluca Mita and Carol Kahoun got on the board. The Miami duo closed out the match with two straight wins.

At three doubles, Wagner and Liliekite jumped out on top of Rebecca Harris and Laura Ramthun, never looking back. Wagner and Lileikite improved their record to 7-2 on the year en route to the 8-0 win.

Riobueno and Albuquerque started out the match with a 3-1 lead before winning the next three straight. The Hurricanes led 7-2 when the match was stopped after Miami took the doubles point.

In singles, the Hurricanes raced out to huge leads at the five and six spots. At the sixth spot, Bolivar made easy work of Rebecca Harris, beating her in straight sets 6-1, 6-0. On the season, Bolivar improved to 16-6 and 10-3 in ACC play.

Minutes player, Albuquerque was the next to add a point on the board for Miami. In dominant fashion, Albuquerque discarded Laura Ramthun 6-0, 6-3.  Albuquerque’s win was her 15th in a row and 13th straight in ACC play.  Albuquerque increased her win total on the spring to a team-high 20 wins.

36th-ranked Wagner dominated her opening set against Kelly Williford  6-0 and was well on her way to a second set win when the match entered its second rain delay of the afternoon. After clearing the courts and a brief stop in action, Wagner finished off her second set 6-3 to signal Miami’s fourth point of the afternoon.

Playing at three singles, No. 62 Laurente returned to her winning ways with a 6-3, 6-1 victory against Sansitha Nandakumar. Laurente opened up the match with a 4-1 lead before closing out the first set by a score of 6-3. In the second set, Laurente rolled to a 6-1 win. Laurente’s victory improves her record to 13-6 overall and 7-5 in ACC play.

“I was happy to see Kelsey go out there and be more business-like,” Vallverdu said. “She had an agenda and she did what she had to do. She was able to implement what we’ve been talking about and we’re hoping to have all of our players ready to go on Sunday.”

In the closest first set of the day, Riobueno edged out Carol Kahoun in a tiebreaker, 7-6. Leading 4-2 to start the match, Kalhoun won the next three to take a one-game lead. After ties at 5-5 and 6-6, Riobueno took the tiebreaker to win the first set 7-6. In the second set it was all Riobueno—who kept her momentum going from the first set tiebreaker win and cruised to a 6-0 victory.

The Hurricanes return to action on Sunday when they welcome No. 9 Virginia to town for the final regular season match. Miami will also honor its three seniors Melissa Bolivar, Brittany Dubins and Monique Albuquerque. First serve on Sunday is set for 1 p.m.