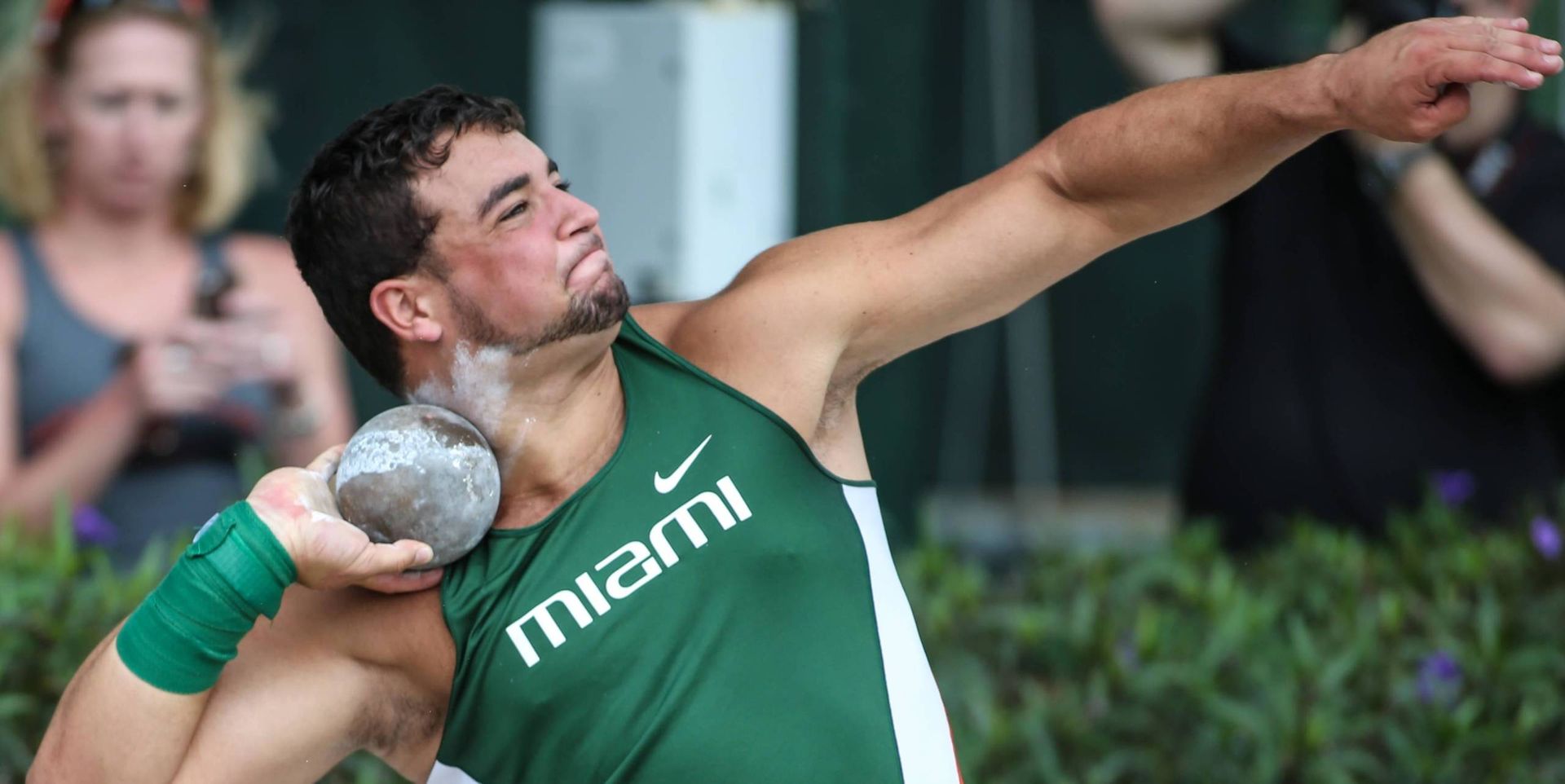 CORAL GABLES, Fla. — When you think of throwers at the University of Miami, you immediately think of Isaiah Simmons.

The sophomore has had unparalleled success in the throws for the Hurricanes. Simmons holds Miami’s shot put and discus records for both indoor and outdoor track and field.  Simmons, who is a three-time ACC champion in shot put, will look to defend his outdoor title this weekend.

But Simmons is not the only gifted thrower for the Miami men.

Freshman Gian Piero Ragonesi has also been an impact performer, moving into the top three in Miami history in shot put, discus, hammer and weight throw. Undersized like Simmons, Ragonesi plans to follow in the footsteps of his teammate and hopes to one day surpass Simmons and become the greatest thrower in Miami history.

“If you go around the world, all the great throwers are 6-foot-7,” Ragonesi said. “Isaiah was the first one I knew of that has thrown those distances being just as small as I am. If he can, then I can. If he did it, I want to figure out how and do it, too.”

Simmons has served as a big motivator to Ragonesi this season and the two can frequently be found near each other in the standings. While Simmons’ success was a big draw in what attracted Ragonesi to the University of Miami, it was far from the only factor that brought the talented thrower to Coral Gables.”

“I came over here and fell in love with the campus,” Ragonesi said. “When I cam on my visit, I was talking to Isaiah and he told me about building a program. At any other good school you where just going to be someone, but here I be able to leave my mark from the beginning. I would get to start at the beginning of the program with the new guys and help draw more attention on this program. I also loved that it was a private school and the academics offered here. This was a great fit for me.”

Ragonesi has fit in well with the Hurricanes and helped Miami’s men score the most points in program history at the ACC Indoor Championships this past March. As someone who has largely competed on his own in the past, Ragonesi is enjoying the team atmosphere and what comes with being a Hurricane.

“We support each other,” Ragonesi said. “When I was in Chile it was more about having fun and when you went to a competition it was a rivalry between a couple of throwers since we were the only ones in the country who were throwing far. But here we actually support each other while we try to beat the other throwers because the other guys are really good, too. It’s different being a part of a team, but I like having the support of my teammates.”

Ragonesi has also adjusted to having a coach. While he was a successful thrower internationally, he did so largely without the assistance of a coach. Now that he is at Miami, he enjoys working with associate head coach Cory Young and feels his marks will only improve as he develops under Coach Young’s guidance.

“Before I came here, I didn’t have a coach for almost two years,” Ragonesi said. “I was doing really good, second in world rankings in my junior year of high school and I went to World European Juniors. I did all of that without a coach, but I was wondering what I could have accomplished had I had someone there working with me.”

“Since the beginning, Coach Young has been really strong in conditioning and lifting,” Ragonesi said. “It was a little bit hard at first, but then Coach talked to me and figured out the best way to work together and it has been great since.”

Between having Simmons to push him and Young to coach him, Ragonesi has made significant gains in his first year as a Hurricane. He appreciates the opportunity presented to him and has not wasted any time in making an impact.

“Everywhere I have lived, I was always one of the best,” Ragonesi said. “There was no competition unless I was going to national competitions or really big competitions. But coming here, Isaiah is throwing a little bit ahead of me at every practice and every meet. That gets me a little bit mad, but it’s a good thing. It makes me push myself to go further and further and has actually helped.”

The talented and versatile Ragonesi has proven himself on some big stages over the years, reaching the finals in shot put at the 2011 IAAF World Youth Championships. He also earned All-ACC honors in the men’s shot put after a strong showing at the 2014 ACC Indoor Championships.

“At ACCs, I hit my mark to qualify for World Juniors and that was a huge weight off my shoulders because I was chasing that number all season,” Ragonesi said. “Once I hit that number, I was fifth heading into the finals and Coach Young came up to me and said, ‘go for the medal, beat those guys.’ I remember just putting the shot on my neck and thinking ‘let’s go!’ I pushed it and just screamed and it was just a huge throw for me and I finished third.”

The freshman has just scratched the surface of what he is capable of as a thrower. Ragonesi is happy with how his collegiate career has started and has set several goals to work towards over the next few years.

“I want to be an All-American here,” Ragonesi said. “As a freshman, I’ll be chasing medals again at the ACCs and working to get to regionals and hopefully nationals. Outside of competing here, I have international competitions like Worlds this year where I will be chasing medals, which will be amazing.”

Ragonesi will look to have another successful conference meet this weekend as he represents the Canes in Chapel Hill, N.C., at the 2014 ACC Outdoor Championships.