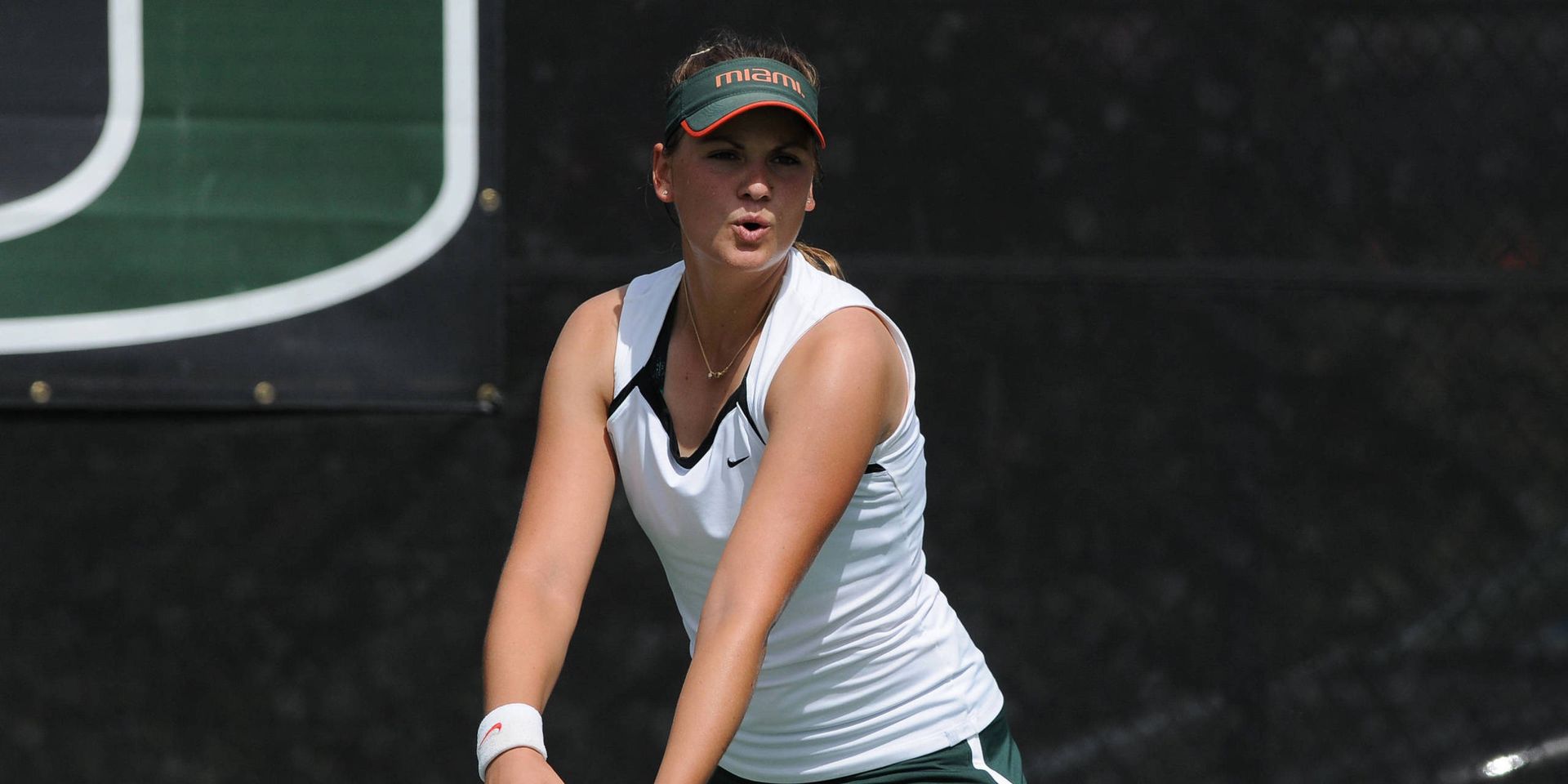 “Overall, it was an amazing team effort on the road today,” head coach Paige Yaroshuk-Tews said. “Going into singles down 1-0 and taking four singles points says a lot about our team.”

Sticking with the same doubles lineup that produced a win at Florida State on Friday, Miami (15-4, 10-2) came up on the wrong end of a close match at one doubles, signaling a 1-0 lead for the host Tigers.

At the top doubles spot was Clementina Riobueno and Kelsey Laurente, who went back and forth with Yana Koroleva and Romy Koelzer in a tight match. Down 3-1, Miami won four of the next five games to take a 5-4 lead, before Clemson regained the lead 7-6. Miami evened the match at seven games apiece but Clemson edged out the Canes for an 8-7 win.

Monique Albuquerque and Melissa Bolivar fell 8-5 at two doubles to Tristen Dewar and Beatrice Gumulya. The match was tied 3-3 before Clemson took control en route to the victory.

The three doubles match featuring Stephanie Wagner and Lina Lileikite against Kessy Rompies and Joana Eidukonyte went unfinished with a score of 7-7. Miami trailed in the match 6-4 before making a comeback to even the match 7-7 when it was stopped early.

Facing a 1-0 deficit entering singles against the Tigers on their home court, Miami came through with some clutch singles performances.

“The work they’ve been putting in in the gym paid off,” Yaroshuk-Tews said. “Fitness really played a role in today’s win.”

Lina Lileikite evened the match score at 1-1 after dismissing No. 124 Gumulya in straight sets 6-4, 6-2. In the first set Lileikite went up 5-2 early on and took control of the match. After her 6-4 opening-set victory, Lileikite raced to a 6-2 win in the second.

No. 48 Wagner delivered an impressive performance against 46th-ranked Koroleva at one singles. In a tight first set that was tied 3-3, 4-4 and 5-5, Wagner prevailed for a 7-5 opening-set win. In the second set Wagner was able to continue her momentum from the first and cruise to 6-2 win.

“Stephanie played amazing tennis,” Yaroshuk-Tews said. “That was one of the hardest-hitting tennis matches I’ve seen in a while.”

Holding onto a 2-1 lead in the match, Albuquerque remained red hot for the Hurricanes, jetting out to a 6-3, 6-3 win against Eidukonyte. The win for Albuquerque was her 14th in a row and 18th overall this spring.

“Monique’s doing what she’s supposed to do,” Yaroshuk-Tews said. “Some minor changes that she’s made to her game have had incredible results. She’s focused, she’s calm and she’s believing in her game.”

Playing against No. 108 Dewar at No. 4 singles, Riobueno jumped out to a 6-3 win in the first set after getting a lead early. The second set required a little more work as Riobueno started down two games to none. After facing that early deficit, Riobueno battled back to eventually win 7-6 in a tiebreaker to give Miami the match victory.

After taking the No. 4 singles first set against Jessy Rompies, Melissa Bolivar fell behind 5-2 in the second set and eventually fell 6-3, forcing a third set. Rompies gained a 5-1 lead in the third set en route to her win.

In a long three-set match, 54th-ranked Laurente fell in the opening set to No. 37 Romy Kolzer 6-2, but rebounded very nicely for a 6-4 win in the second. In another tight set in the third, Laurente jumped out to a 3-0 lead. Despite her 3-0 advantage to start the third, Koelzer regained her momentum and defeated Laurente 7-5.

The Hurricanes get back on the courts next weekend for their final two home matches of the season. Miami will host Virginia Tech on Friday at 3 p.m. and Virginia on Sunday at noon. The match against the Cavaliers will also be Senior Day, where Miami will honor its three seniors Melissa Bolivar, Brittany Dubins and Monique Albuquerque.