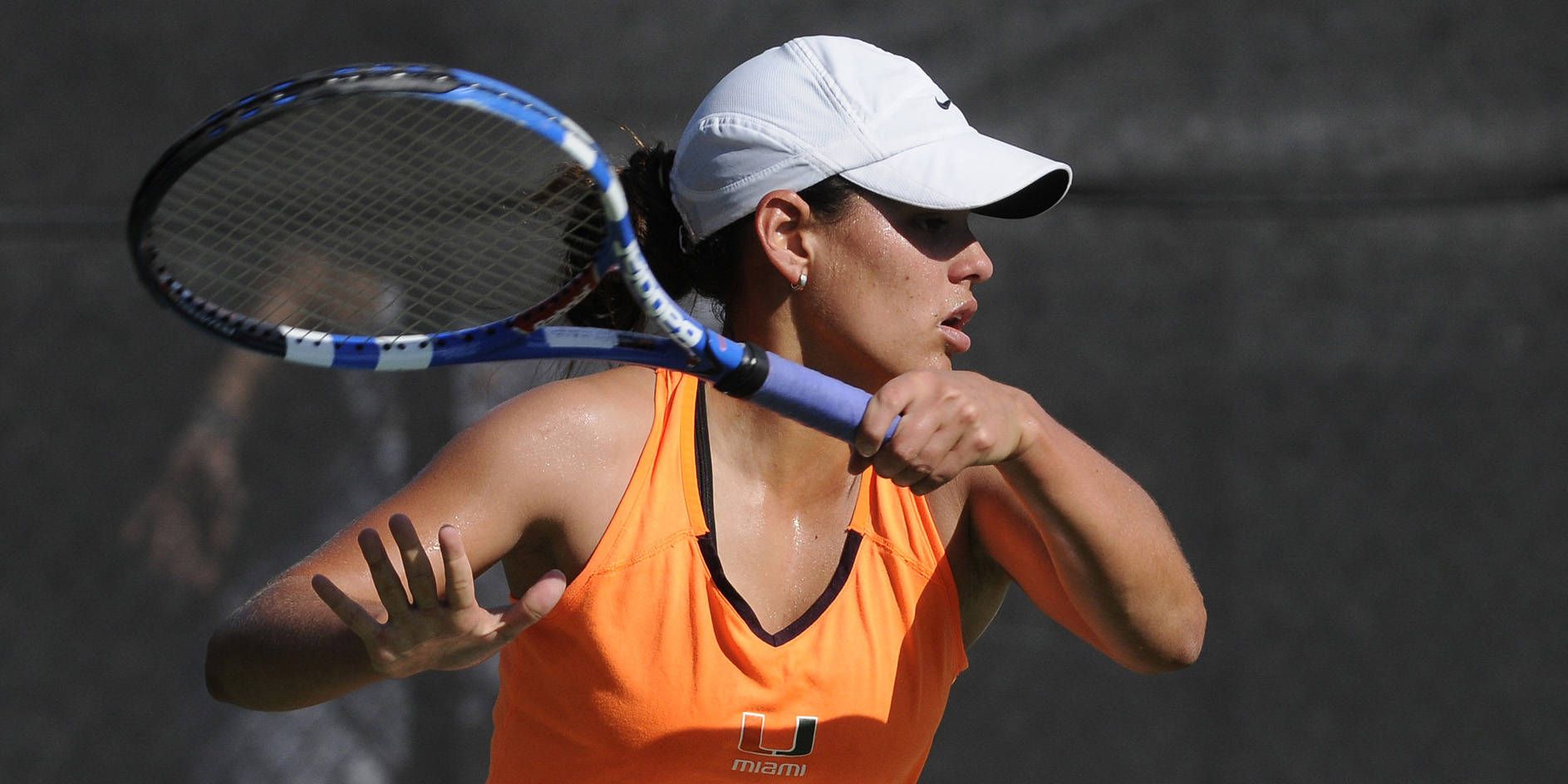 “Florida State is a competitive team,” head coach Paige Yaroshuk-Tews said. “They fight hard, they don’t give you points, you’ve got to earn the win and we were able to do that today. Everyone played solid and closed out matches when they needed to”

Miami (15-4, 9-2 ACC) shook up its doubles lineups against the Seminoles and it seemed to pay off as the Canes cruised to wins at the two and three doubles spots. Playing together for the first time all spring, Monique Albuquerque and Melissa Bolivar started out the match with a 2-1 lead and took advantage of their strong start. After leading 4-2, Miami darted out to four straight wins to earn the 8-2 win.

“We made a switch and they responded well,” Yaroshuk-Tews said. “We needed to change things up a bit and I was happy with the way they responded.”

At three doubles, Lina Lileikite and Stephanie Wagner dominated Florida State’s Kristina Schleich and Mia Vriens 8-0. For Wagner and Lileikite, it’s their sixth win together of the year and fourth in ACC play.

At one doubles, Clementina Riobueno and Kelsey Laurente held a 4-3 lead against Florida State’s 77th-ranked Daneika Borthwick and Kerrie Cartwright when the match was stopped.

In singles it was Albuquerque that put the first point on the board, continuing her hot streak with a 6-4, 6-0 win against Florida State’s Majlena Pederson. The win for Albuquerque was her 13th in a row and gave Miami a 2-0 advantage over the Seminoles.

After a bit of a slow start, Bolivar was next to tally a point on the board with her straight sets win against Kristina Schleich. Tied 2-2 in the first set, the senior then turned it up a notch and won the next four in a row to take the set. Continuing the momentum in the second, Bolivar cruised to a 6-0 win.

Playing at four singles, Riobueno’s win against Daniela Schippers clinched the match win for the Hurricanes. Holding a 4-1 lead early in the first set, Riobueno did not let up, taking the match in straight sets 6-2, 6-3.

At three singles, Lileikite came away on the winning end of a tough three set match against Florida State’s Mia Vriens. After taking the opening set 6-3, Vriens held the upper hand in the second, tying the match with her 6-2 set win. Lileikite took an early 2-1 lead in the third and was able to come away with a 6-2 win to take the match.

No. 54 Laurente fell behind in her match against Kerrie Cartwright and was never truly able to recover. Trailing 5-1 in the opening set, Laurente found her groove and won the next three games to make it 5-4, but would drop the first frame 6-4. In the second set Laurente and Cartwright battled it out all the way until Cartwright came away with a 7-6 (3) tiebreaker win.

“Kelsey needs to start playing complete matches,” Yaroshuk-Tews said. “In the second set she played really good tennis but then she got distracted and ended up dropping the set.”

In arguably the most exciting match of the day, 48th-ranked Wagner and Florida State’s Daneika Borthwick dueled it out in a long three-setter with Wagner coming away victorious. Wagner won the first set convincingly, 6-1, but Borthwick proved that she could stick with her after posting a 6-4 win in the second frame. In the third, Wagner fell behind 3-1 before evening it up a 4-4 and gaining some momentum. In a tiebreaker, Wagner edged out Borthwick 7-6 (3) to finalize Miami’s 6-1 win against the Seminoles.

“I was really happy for Stephanie that she got that win,” Yaroshuk-Tews said. “For her to get that win against a player she has lost to and had an unfinished match against in the past, it’s a step in the right direction for her.”

The Hurricanes continue their road trip on Sunday when they head to Clemson, S.C., to take on the 15th-ranked Tigers.