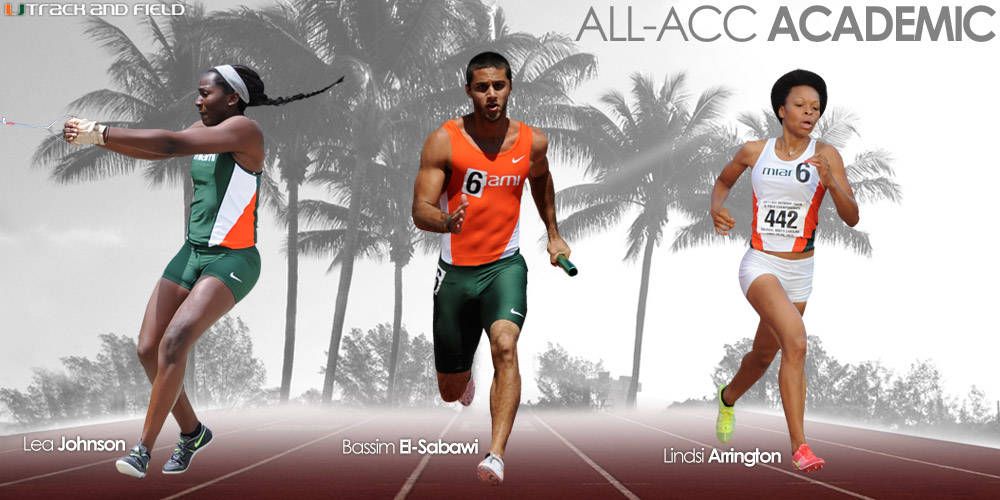 “I’m very proud of them and that they are a part of our program,” Miami director of track and field/cross country Amy Deem said. “I think it shows that not only are we trying to get it done athletically, but they are students first. The things that they have accomplished like being accepted into medical school, getting ACC scholarships, I think it shows what college track and field is about. It’s just preparing yourself for the next step in life.”

Arrington has been a member of the cross country and track and field teams at Miami, earning All-ACC Academic honors for the 2013 indoor season and the 2013 cross country campaign. A native of Woodbridge, Virginia, she ranks second in UM history in both the 5K and 6K. On the track, Arrington was a member of the top two distance medley relay teams in school history. She also has run the second-fastest indoor mile in school history and the second-best indoor 3000 meters. She ranks third in the outdoor 1500 meters and fourth in the outdoor 5000 meters. An All-ACC Academic selection, she is a recipient of an ACC Postgraduate Scholarship and will graduate this spring with a degree in communications.

El-Sabawi has run sprints in his four years at Miami, earning All-ACC Academic honors for both indoor and outdoor track in 2013. A native of San Diego, California, El-Sabawi is a recipient of the ACC Postgraduate Scholarship and will graduate this spring with a degree in biology.

Arrington, El-Sabawi and Johnson will all compete this Saturday at the Hurricane Alumni Invitational, Miami’s final home meet of the 2014 season.