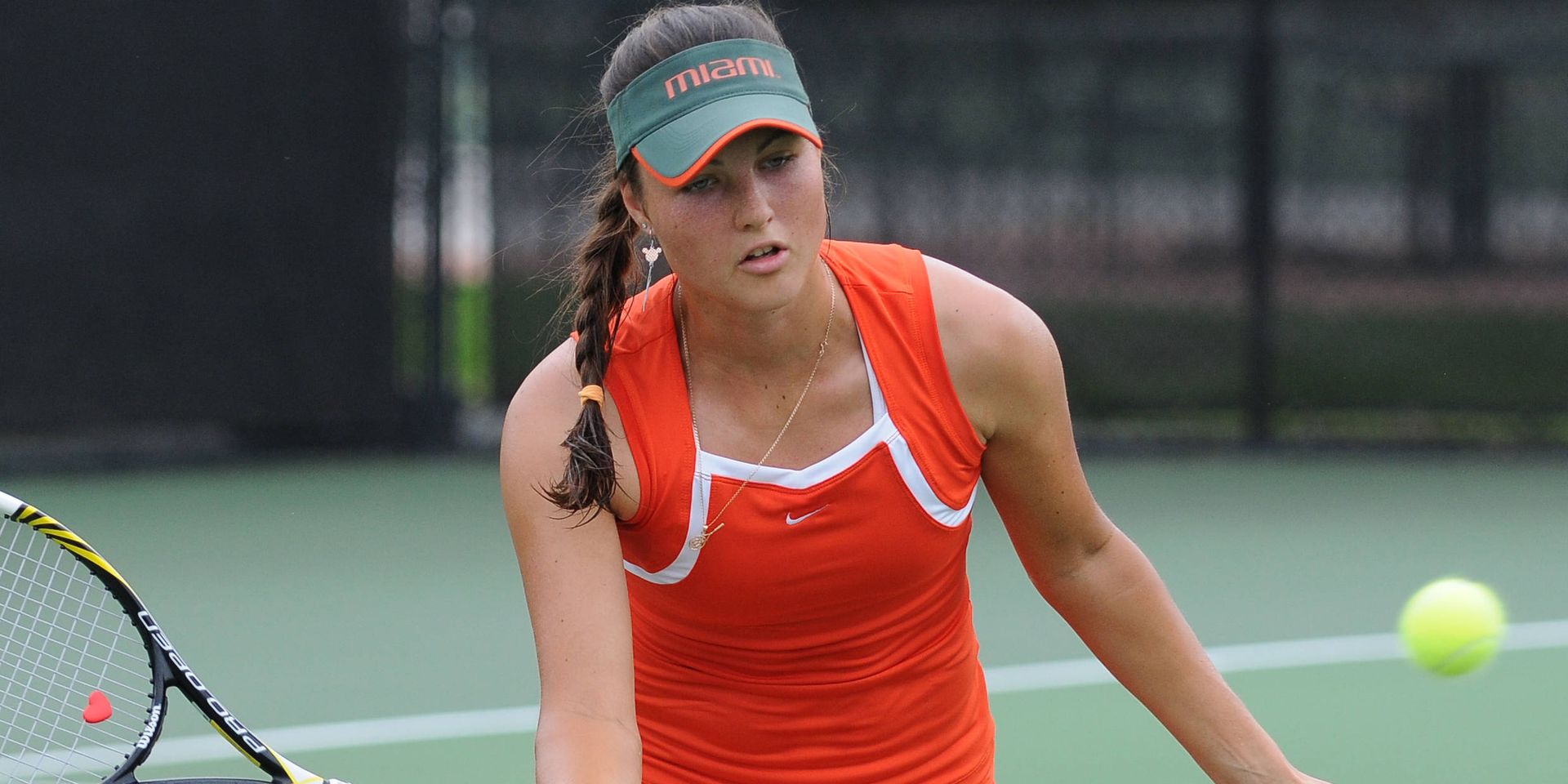 CHAPEL HILL, N.C. – The 14th-ranked Miami Hurricanes women’s tennis team fell to No. 6 North Carolina on Saturday afternoon 5-2 for its first ACC loss of the 2014 season.

“We played defensive at one and two doubles,” head coach Paige Yaroshuk-Tews said. “In singles we were simply outplayed at one and two. Then, we were sitting with four opportunities to come up with four points and I think that affected our mindset a little bit. Give credit to UNC—they played well. They do a good job forcing you out of your comfort zone.”

Miami (14-3, 8-1 ACC) didn’t get off to its best start in doubles, falling behind early in two of the three matches. The Canes’ top duo and 23rd-ranked Monique Albuquerque and Clementina Riobueno couldn’t get much going and fell to third-ranked Jamie Loeb and Hayley Carter 8-2.

At three doubles, Stephanie Wagner and Lina Lileikite took an early 3-2 lead against UNC’s Carolina Price and Laura Slater. The teams went back and forth but Miami managed to maintain control, leading the match at 4-3, 5-3 and 6-4 before pulling away for an 8-4 win.

For Miami, it was the first ACC doubles point loss since April 12 of last year—also coming against the Tar Heels.

Facing a 1-0 deficit going into singles against a UNC team boasting three ranked players, the Hurricanes knew they were up for a major challenge.

Miami struck first in singles, evening the match 1-1 with Monique Albuquerque’s 6-3, 6-1 win against Tessa Lyons. After losing the first game in the first set, Albuquerque dominated the rest of the way en route to her 11th straight win.

At one-singles, 49th-ranked Laurente did all she could to contain Loeb, the nation’s top singles player, but Loeb proved to be too much. After falling in the first set 6-3, Laurente gained some momentum in the second set, going up 2-1 against Loeb, but couldn’t keep it going throughout the set. Loeb would take a 4-3 lead before closing out the match by a score of 6-3.

Playing against North Carolina’s Carter at two singles, No. 61 Wagner was defeated in straight sets, 6-2, 6-1. Wagner took the opening game of the second set, but couldn’t muster much else against the nation’s No. 7 singles player. The loss was Wagner’s first in the last 10 matches and her first in ACC play.

At the fifth-singles position, Bolivar couldn’t maintain her early first set lead against Kate Vialle and lost the tight match 6-4, 7-6. Bolivar held a 4-1 lead in the first set but it slipped away as Vialle won the next five games. In the second set, Bolivar was down 3-1 early but rallied to tie the match 6-6 before Vialle came away with the 7-6 set win.

In one of the tighter matches of the match, Miami’s Riobueno fell 7-6, 6-4 to North Carolina’s Caroline Price. In a back-and-forth first set, Riobueno came up on the losing end of the battle, falling 7-6. In the second, Riobueno faced a deficit early and was never able to overcome it, falling 6-4.

In the final singles match remaining with the match already decided, Lileikite continued to battle through a long three-setter with Ashley Dai. Lileikite fell 6-3 in the opening set but executed a complete turnaround from that point forward, dominating Dai 6-0 in the second set. Similar to the first set, the third was also a battle—but this time Lileikite prevailed. With the set knotted a 2-2, Lileikite took the next game and took over the match en route to the 6-3 win.

“Another great opportunity is in front of us tomorrow, and I’m expecting us to play better tennis,”Yaroshuk-Tews said.

The Hurricanes get right back on the court Sunday against No. 1 Duke. First serve from Durham, N.C., is set for noon.