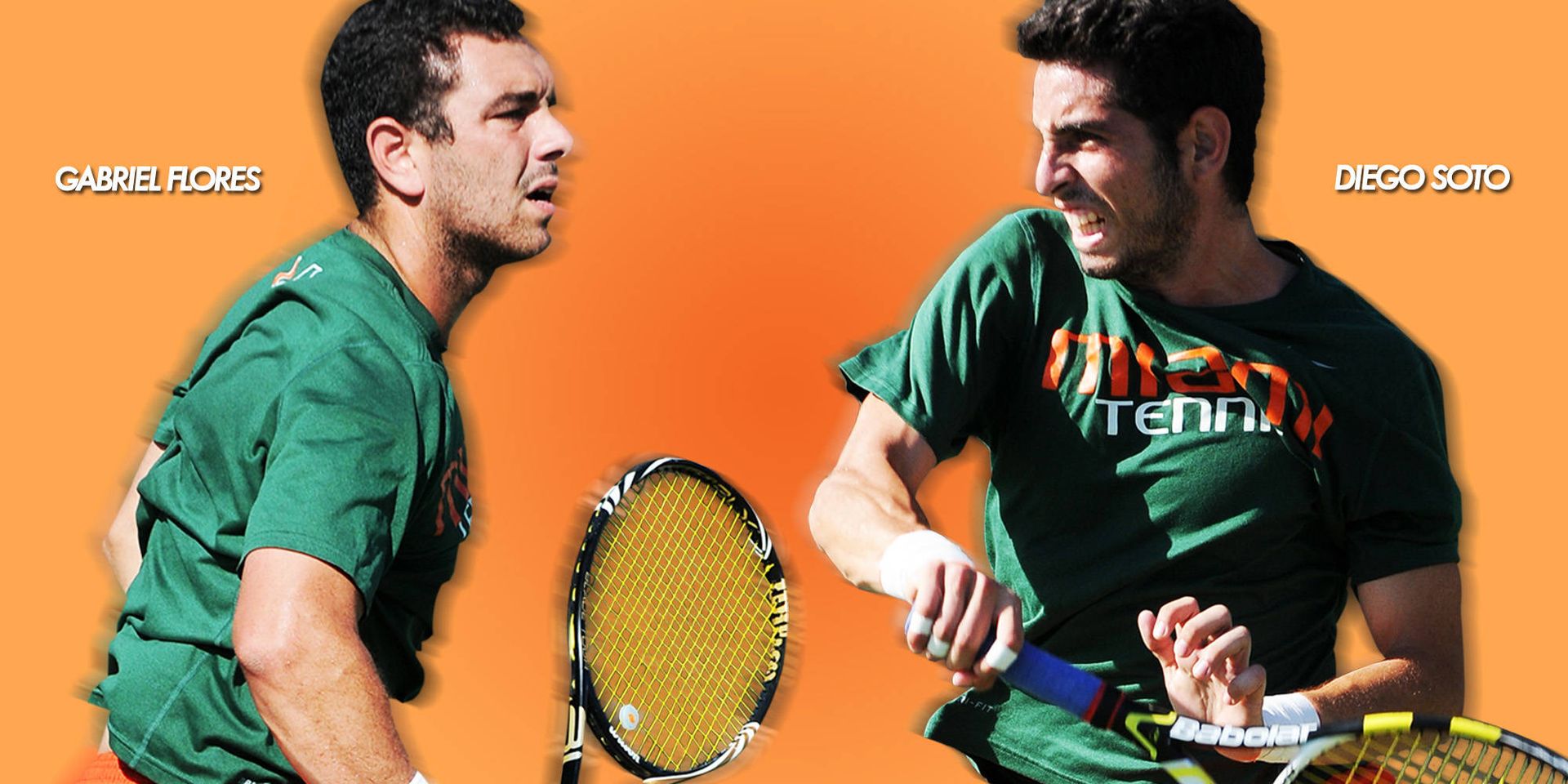 Going away to college is a daunting task for any teenager. It’s a time of transitioning into independence and experiencing many firsts—your initial time cooking, sharing a community bathroom, maintaining time management and most importantly doing your own laundry without your mom’s assistance.

Diego Soto encountered those essential college basics as an 18-year-old freshman, along with a couple of extracurricular firsts as well. Soto’s initial trip to the University of Miami was his American debut. The Spanish-born Soto traveled across the Atlantic Ocean from Madrid to Coral Gables unable to speak or understand any English.

Within his first week on Miami’s campus, Soto met fellow tennis freshman Gabriel Flores, his future teammate and doubles partner. Flores, also fluent in Spanish, was already a semester deep at Miami, arriving from Puerto Rico a few months prior to Soto’s landfall.

Flores and Soto believe it was their similar personalities that immediately triggered their friendship, but admitted it was their common bond through language that launched a brotherly relationship.

“It was like paradise,” Soto said, describing his first encounter with Flores. “None of the students spoke Spanish and I didn’t speak English. I started talking to him, and it was nice from the beginning. He introduced me to a lot of people and he was a translator for me.”

Flores’ brief time at UM, before Soto’s arrival, allowed him to learn the layout of campus and become familiar with fellow freshmen.

“I showed him around school and introduced him to people,” Flores said. “When you have a person that speaks your home language, you feel more comfortable talking and expressing yourself.”

It has been four years since the duo first met in 2009. Now seniors, Flores and Soto are usually found together, whether it’s walking between classes or swapping swings at practice. At one point, the two were spending too much time together that the coaching staff had to limit their time together preparing for matches.

“In practice, we mess around a lot, screaming stuff like ‘Woo!’ in front of our teammates when we make a pass,” Flores explained while Soto laughed, confirming the story. “Some of them get upset, some of them laugh. We’re competing well, but we’re laughing and having fun, so for awhile they didn’t let us train doubles together—they would only let us play together a week before competition.”

Despite the efforts of the coaching staff, the pair remained inseparable, and they had no choice but to embrace the chemistry between the two and allow for Flores and Soto to be themselves.

“They understood that is just how we are. We are like this inside and outside of the court,” Soto said. “If we have fun and joke around with each other, we play better and compete better.”

Enjoying the fact he is playing tennis keeps Flores stimulated through the duration of matches.

“We’re serious, but you see us laughing and having fun, which is a huge factor in keeping me motivated to keep playing doubles and then singles so I don’t burn out,” Flores elaborated.

When they arrived as underclassmen, playing time was at a premium for Flores and Soto. With five seniors on the roster at the time, the two freshmen friends were placed in a predicament: when a senior was unable to play, the two had to compete against each other to secure a spot on the court.

“We were fighting for one position—who plays in front of each other, who plays one, who plays two,” Soto reminisced. “But that’s when we were kids, 18 years old. Then you’re 22 and you realize everything is about the team and winning. It doesn’t matter if he plays in front of me or if I play in front of him. It’s winning for the both of us and helping the team.”

Fast forward three years later, Flores and Soto are the veterans of the team, along with fellow senior Omar Aly, and the days of jostling for playing position are in the past. They now use each other’s performances as a catalyst to improve their play from match-to-match and in practice, using competition and friendly contests.

At times, a simple glance at the scoreboard is enough to ignite a rally for either of them.

Since their freshman season, the duo has been playing side-by-side in doubles and on adjacent courts during singles. The familiarity between Flores and Soto has created a comfort level that promotes candid communication between the two. When one is not playing up to their standard of performance, the other does not shy away from conveying their opinion and advice.

Soto explained the friendship outside the gates of the Neil Schiff Tennis Center has translated into the free-speaking culture in practice and matches—he described it as “healthy” for the entire team and is an alternative way for them to help each other.

When debating who is the more talented tennis player, both Flores and Soto deferred to the other. Instead, they agreed that although their personalities are similar, when it came to tennis, their styles contrast.

“I base my game on more physical stuff and Gabriel is more on his shots,” Soto explained.  “To people who really watch tennis, the shots aspect, he’s better than me. His shots are way better and way more powerful.”

Flores shared the same sentiments as Soto, pointing out the physical aspect of Soto’s game. The subtleties of their styles, despite their differences, find equilibrium on the court during doubles matches.

“When it comes to playing doubles, we compliment each other,” Flores said. “We play extremely the opposite of how you’re supposed to play doubles. We don’t approach the net that much and we don’t serve on volley. We stay back—I hit big shots from the ground strokes, and he runs all over the court and finishes points at the net, which I set him up to do. He returns really well and I serve really well, it’s a good mix we have.”

The “mix” Flores and Soto have developed since joining forces as freshmen has been more than good. They have 10 doubles wins so far this spring campaign.

In their final stretch as Hurricanes, Flores and Soto have set a simple goal this season: “Win more.”

“We want the team to do really well. We want to win more doubles points than we did before. We want to have a positive record and help the team as much as possible,” Soto said. “Also, we want to have fun. Ten years from now, I’m going to look back and say, ‘We did really well, and I had a lot of fun with it.’”

Diego Soto and Gabriel Floes enrolled at the University of Miami to play tennis, oblivious of the relationship they would develop with each other. In four years’ time, the teammates have shared the college experience together and have built a partnership that they believe will survive after the season’s end and graduation.

“All of the experiences we have had,” Soto said. “Everything here we pass by, are things that are going to be in my mind for the rest of my life.”