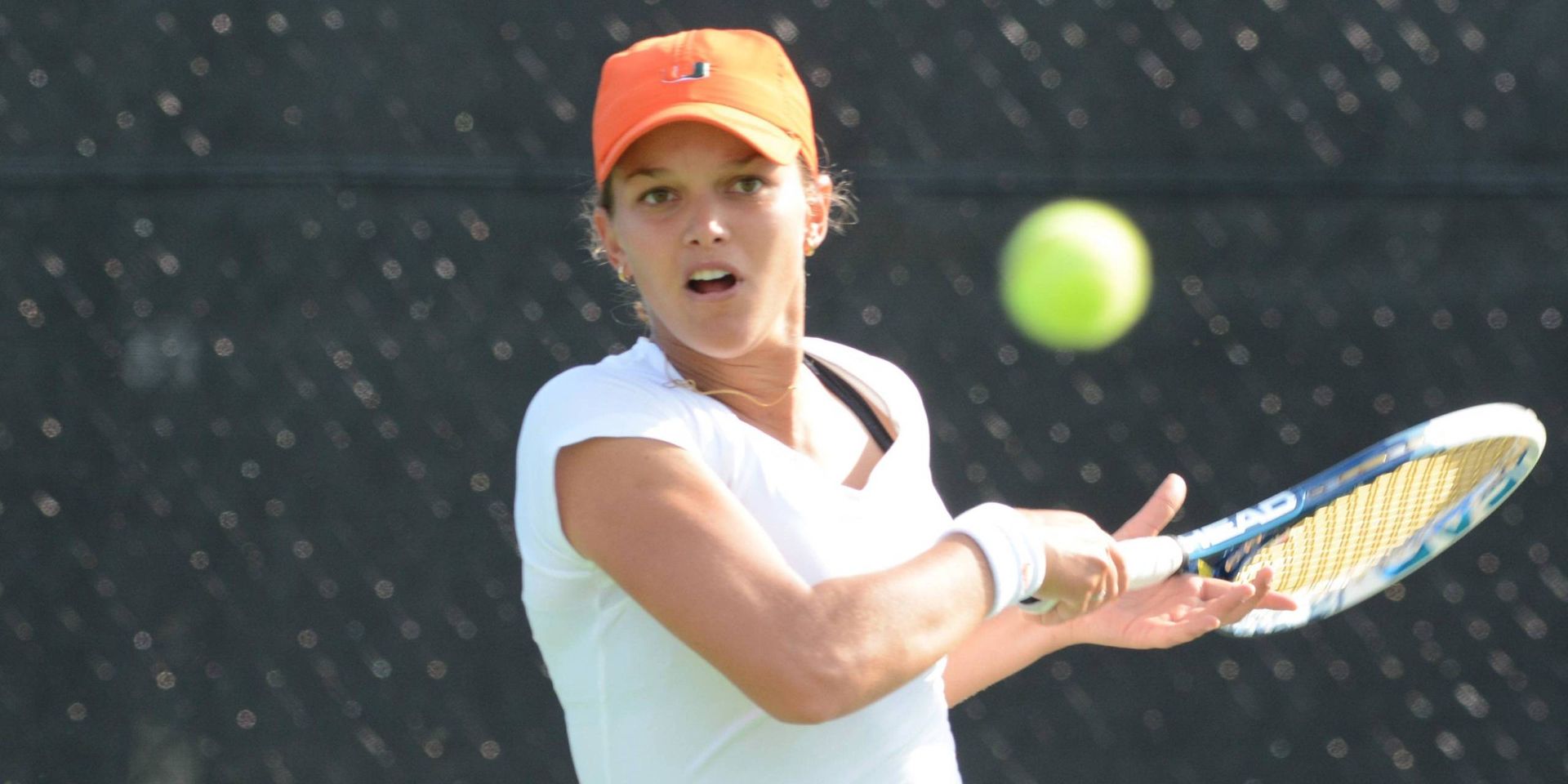 CORAL GABLES, Fla. – Six University of Miami student-athletes were selected for the Who’s Who Among Students in American Universities and Colleges for 2014.

Monique Albuquerque, Lindsi Arrington, Carina Cuculiza, Bassim El-Sabawi, Breanna Hayton and AJ Salcines were among the 76 honorees selected from the University of Miami. 57 undergraduate students, as well as two graduate students and 17 law students, were honored at a reception in the Student Activity Center on Tuesday afternoon.

Monique Albuquerque; Economics; Women’s Tennis; Porto Alegre, Brazil
Monique Albuquerque plays a key role for the reigning ACC champion women’s tennis team. The junior is currently 15-2 on the season as a singles player and carries a perfect 8-0 record in ACC play. Albuquerque and double partner Clementina Riobueno has tallied a 16-1 doubles record this spring, collecting the most wins of any Miami doubles pairing this season. The Porto Alegre, Brazil native has shined on the court and in the classroom in her time as Hurricane, helping lead Miami to its first ACC title last season while earning a spot on the ACC Academic Honor Roll. An economics major, Albuquerque has made multiple appearances on the Athletic Director Honor Roll (GPA of 3.2 or higher), the Dean’s List (3.5 GPA), Provost’s Honor Roll (3.75) and the President’s Honor Roll (4.0 GPA). She was inducted into the Omicron Delta Kappa National Leadership Honor Society in October 2013.

Lindsi Arrington; Motion Picture Practice; Women’s Cross Country/Track & Field; Woodbridge, Va.
A standout on the race course and in the classroom, Lindsi Arrington has twice earned All-ACC Academic honors. The senior has been a key member of Miami’s cross country and track and field programs. Arrington capped her cross country career by running the second-fastest women’s 6K time in school history (21:15.53) at the 2013 NCAA South Regional. Her personal-best 5K time of 17:36.23, set at the 2013 Disney World Classic, also ranks second in UM history.  Arrington ranks among the top 5 in school history in the indoor mile (2nd, 4:54.95), the indoor 3000m (2nd, 10:03.35), the outdoor 1500m (3rd, 4:30.10) and the outdoor 5000m (4th, 17:26.39). After a solid performance during the 2014 indoor season, Arrington has continued her success outdoors, winning the women’s 1500m and the women’s 3000m at the 2014 Miami Invitational. She was also one of four Canes selected to receive the 2014 Weaver-James-Corrigan Award, a postgraduate scholarship awarded by the ACC.

Carina Cuculiza; Finance; Women’s Golf; Managua, Nicaragua
Carina Cuculiza has been a key member of Miami’s golf team over the past four years. The senior from Managua, Nicaragua has totaled three Top 10 finishes as a Hurricane and boasts a career-best round of 69, shot at the Palmetto Intercollegiate Tournament in the 2010-11 season. In 2013, Cuculiza helped Miami make its first NCAA postseason appearance since 2005. Cuculiza was tapped into the Iron Arrow Honor Society in December 2013. The finance major was selected to the 2013 Women’s Golf Coaches Association (WGCA) All-American Scholar Team and also earned 2013 All-ACC Academic honors.

Bassim El-Sabawi; Biology; Men’s Track & Field; San Diego, Calif.
Bassim El-Sabawi, a sprinter on Miami’s men’s track team, is the textbook definition of an exemplary student-athlete. El-Sabawi is a three-time ACC Academic Honor Roll member. The biology major has also made the Athletic Director Honor Roll, the Dean’s List, and the Provost’s Honor Roll in every semester that he has studied at Miami. In recognition of his dedication and commitment to both academics and athletics, the University of Miami rewarded El-Sabawi with the title of the 2012-2013 UM Athletic Department Underclassmen Male Scholar Athlete of the Year. El-Sabawi was also one of four Canes selected to receive the 2014 Weaver-James-Corrigan Award, a postgraduate scholarship awarded by the ACC.

Breanna Hayton; Aerospace Engineering; Women’s Rowing; Victoria, British Columbia, Canada
Breanna Hayton has established herself as an excellent student-athlete and ambassador for both the engineering and rowing communities. An aerospace engineering major, Hayton has earned distinction on the Dean’s List Honor Roll (3.5 GPA), Athletic Director Honor Roll (3.2 GPA) and the Provost’s Honor Roll (3.75 GPA). She has also been named to the ACC Honor Roll three times in her career and was selected as a CRCA National Scholar-Athlete following her junior year. Hayton is a two-time All-ACC selection in rowing and earned second team All-Region honors following the 2012-13 season. The senior is also heavily involved in Miami’s Student-Athlete Advisory Committee, serving as one of the ACC representatives for the Hurricanes’ student-athletes.

AJ Salcines; Baseball; Biology; Miami, Fla.
AJ Salcines has been one of the team’s most important relievers on the mound, and is now in his fourth and final season with the Hurricanes. Salcines, who was named to the ACC Honor Roll for his first three years, has been named to the Dean’s List Honor Roll for all seven semesters of his undergraduate career. Salcines, a member of the 2012 All-ACC Academic Team, was named team MVP in 2012 after a dominant season out of the bullpen. Salcines was also one of four Canes selected to receive the 2014 Weaver-James-Corrigan Award, a postgraduate scholarship awarded by the ACC.