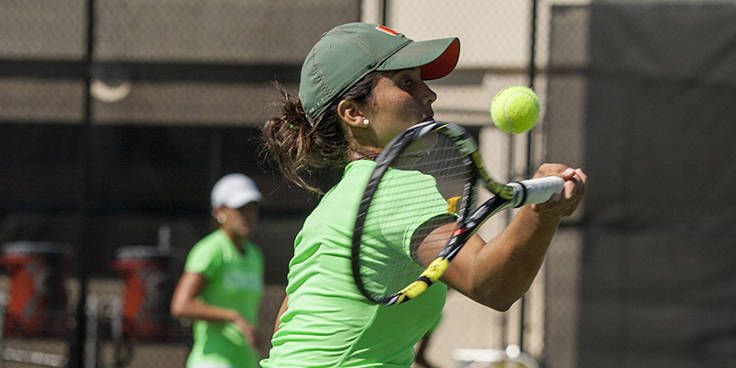 After a slow doubles start, Miami (13-2, 7-0 ACC) began to pull away, eventually earning the  point after picking up wins from one doubles and two doubles.

Utilizing a different doubles lineup, 31st-ranked Melissa Bolivar and Kelsey Laurente took down Syracuse’ Maddie Kobelt and Valeria Salazar 8-4. In a tight match throughout, the Miami pair held 3-2 and 5-4 leads before winning four straight games to close out the match.

At two doubles, 14th-ranked Monique Albuquerque and Clementina Riobueno started off the match with a 3-1 lead, before Syracuse pulled closer to make it 4-3. The Canes won four of the next five to win the match and clinch the doubles point for the hosts.

Unfortunately the doubles point for Miami stopped the furious comeback of Stephanie Wagner and Lina Lileikite’s three doubles match. Trailing 5-0, the Hurricanes surged back to win five straight games and tie the match 5-5. After taking a brief 6-5 lead, the match was tied 7-7 when it stopped.

Earning Miami’s first singles point was Albuquerque, who won her first set 6-3 and led her opponent 3-0 in the second set before she had to retire. Albuquerque, playing at the No. 5 spot Friday, improved her spring record to 13-2 with the win.

Just minutes later the Hurricanes took a 3-0 lead when Lileikite handled Syracuse’ Salazar in straight sets 6-0, 6-1. For Lileikite it was the ninth win of the season and third straight.

48th-ranked Laurente topped Syracuse’ Rhiann Newborn easily in the first set, taking it by a 6-1 score. In the second set, Newborn took a 4-1 lead and appeared to be on her way to forcing a third set. Laurente then went on a tear, winning five games in a row to close out the match in straight sets.

No. 61 Wagner clinched her ninth straight win this spring in a 7-5, 6-1 win against Kobelt. Wagner improved her spring singles record to 14-2 and an even more impressive 8-1 at the No. 1 singles spot.

Bolivar capped off the sweep of the Orange with a 6-1, 6-4  win against Komal Safdar. The win for Bolivar marks the seventh ACC win for her this season and her 13th overall of the spring.

Miami gets back to action on Sunday when the Hurricanes travel to Winston-Salem, N.C., to take on Wake Forest at noon.