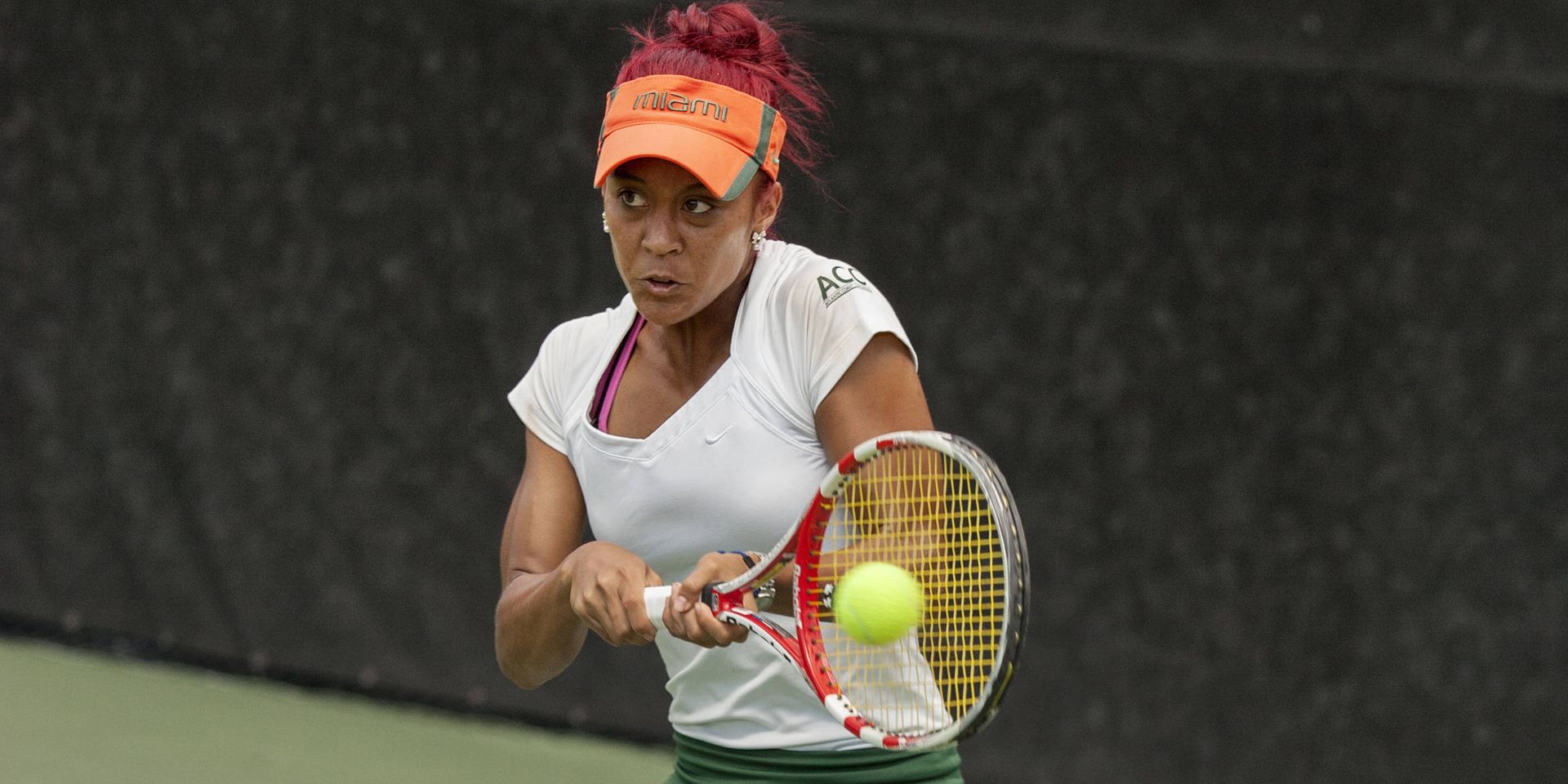 Miami (12-2) opened the match a little slow in doubles, but eventually finished off the Tigers at the No. 1 and No. 3 spots to take a 1-0 lead in the match going into singles.

After opening up the match with a 3-0 lead, Miami’s third doubles team of Stephanie Wagner and Lina Lileikite lost its next two games to Princeton’s Caroline Joyce and Katie Goepel. After that, the Canes never looked back and won the next six games to put the first point on the board.

“I was happy with three doubles,” assistant coach Laura Vallverdu said. “After two sloppy games, I saw Steffi take more of a leadership role and that’s when they were able to take back control of the match.”

At No. 1 doubles for Miami, 14th-ranked Clementina Riobueno and Monique Albuquerque played back and forth in a tight doubles match. They eventually broke away with a 7-3 lead against Princeton’s Joan Cannon and Lindsay Graff. After battling the next few games, Miami won the match 8-5, signaling the doubles win for the Canes.

Despite not finishing their match, No. 2 doubles Kelsey Laurente and Melissa Bolivar may have had the strongest doubles performance of the day. The 31st-ranked duo led Princeton’s Emily Hahn and Amanda Muliawa 7-2 when the match was stopped.

Once singles got underway, it was clear that Princeton wasn’t going to go down easy. Many of the matches had lopsided scores, but required quality tennis from Miami to close out games and sets.

48th-ranked Laurente was the first to complete her match, a 7-5, 6-1 win against Muliawa. The win put Miami up 2-0 on the board and for Laurente was the second straight win and 12th of the season.

“Kelsey didn’t use much variety in the first set,” Vallverdu said. “But I was happy she made a minor change and won the second set 6-1.”

61st-ranked Wagner and Bolivar both extended their match win streaks to eight. Wagner took down Princeton’s Lindsay Graff by a score of 6-2, 6-3 and Bolivar handled Goepel in a tough three-setter 6-1, 6-7, 6-1.

Lileikite and Riobueno both handled their opponents in straight sets. Capturing her third straight win, Lileikite came away with the 7-5, 6-2 victory against Princeton’s Joyce. Riobueno extended her match win streak to seven, the second-longest on the team. In a 6-3, 7-5 win against Princeton’s Hahn, Riobueno picked up her 11th win of the season.

In a long, three-set match, senior Brittany Dubins came up on the short end of a phenomenal battle with Princeton’s Katherine Flanigan.

After prevailing in a hard-fought first set 7-5, Dubins dropped the second set 6-0—much to do with a lower extremity injury that she played through. In the third set, Flanigan was able to edge out Dubins 7-5.

“It was unfortunate Brittany came up a bit short, but I was really proud of the way she played today,” Vallverdu said. “I was very happy with her competition, she always gives 110 percent for us every time she’s out there and that’s all you can ask of a player.”

The Hurricanes resume ACC play on Friday when they welcome ACC newcomer Syracuse to town for a dual match set for 11 a.m.