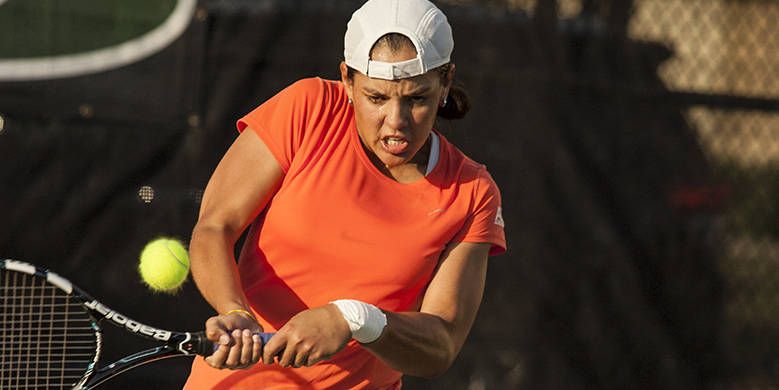 “We did an unbelievable job today of staying on task,” head coach Paige Yaroshuk-Tews said. “We played this team the way we needed to play them. The effort, the energy from our kids one through six was exactly where it needed to be to take down a team like Baylor.”

Miami started off the match the exact way it wanted to: by taking the doubles point. The Hurricanes earned wins in the No. 1 and No. 3 doubles spots to go ahead 1-0.

14th-ranked Clementina Riobueno and Monique Albuquerque took care of business against Baylor’s top doubles tandem and 34th-ranked Blair Shankle and Victoria Kisialeva. The Miami duo dominated the pair of Bears by an 8-1 score.

“I was really happy with the way we were being very thorough, very detailed,” Yaroshuk-Tews said. “To get up as big as we did at one, two and three, tells you that we were playing clean tennis, not just aggressive tennis.”

Tallying the next win for the Hurricanes was the three-doubles team Stephanie Wagner and Lina Lileikite. Playing against Baylor’s Alex Leatu and Jordaan Sanford, Miami prevailed 8-2.

“We had a really good week of practice,” Wagner said.  “It was spring break, we played a lot of doubles and prepared a lot for singles.”

Ending their match before it finished after Miami had won the doubles point were 31st-ranked Melissa Bolivar and Kelsey Laurente. The Hurricane pair was tied 5-5 with Baylor’s Ema Burgic and Kiah Generette.

With a 1-0 lead going into singles, Albuquerque was the first to get the Hurricanes another point on the board with her 6-1, 6-1 win against Leatu. Albuquerque picked up her eighth consecutive win and improved her spring singles record to 13-2.

“She’s playing now and she’s not questioning, she’s not doubting,” Yaroshuk-Tews said. “She gets what college tennis is about. It was big for her to get off the court as fast as she did today. To put two points up there on the board that fast was big considering how tight all the other matches were.”

With two wins down and two more to go, every other singles match on the court was neck and neck.

No. 61 Wagner edged out 52nd-ranked Generette 6-4 in the opening set and then cruised to a 6-2 second set victory to win the match. With the win, Wagner picked up her third victory of the season against a ranked opponent and her sixth win at the No. 1 singles spot.

“I had a gameplan from the beginning of the match,” Wagner said. “I have beaten her before and I knew how she played. I executed the game plan and played very well.”

In need of just one more win to clinch the match, senior Melissa Bolivar came through in a clutch performance. Playing at the five singles spot, Bolivar prevailed in a competitive first set, 6-4. Tied 4-4 in the second set, Bolivar took control of the match and won the next two games to defeat Baylor’s Alex Clay.

“Meli has clinched so many big matches for our program and to be able to do it again today was big,” Yaroshuk-Tews said.

It was Bolivar’s seventh-consecutive victory and her 11th overall win of the spring.

Three singles matches went unfinished after Miami had won the match. 48th-ranked Laurente fell in her first set to No. 66 Burgic 6-3, but had battled back after trailing in the second set to tie it up 4-4.

Also falling in the first set but battling back in the second was Riobueno. Playing in the three singles spot against Sanford, Riobeuno dropped the opening set 6-3 but was knotted 3-3 in the second when the match ended.

At the No. 4 singles spot, Lileikite dropped a heartbreaker in the first set 7-6 and was trailing early in the second set to Baylor’s Shankle when the Hurricanes ended the match.

Miami returns to action on Wednesday, Mar. 19 against the Princeton Tigers. First serve is slated for 12:00 p.m.