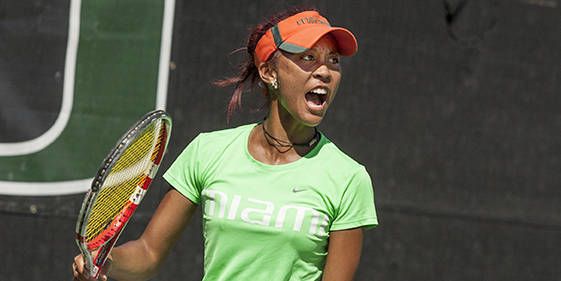 CORAL GABLES, Fla. — The 20th-ranked Miami Hurricanes women’s remained perfect in ACC play with a 7-0 sweep of No. 19 Georgia Tech on Sunday afternoon.

The win over the Yellow Jackets was the second ACC win for the Hurricanes this weekend and capped off a four-match home stand to start ACC play.

“We had some game plans that we wanted to implement and the girls were able execute them,” head coach Paige Yaroshuk-Tews said. “I have been waiting for a day like this for a while, where every girl shows up, every girl battles hard, and every girl stays disciplined and detailed. Like I said, we have been preaching this in practice for a while, so it was nice to see it happen today.”

In the biggest win of the day, 48th-ranked Kelsey Laurente and Melissa Bolivar—playing at the one-double spot today—topped the 3rd-ranked doubles team in the nation.

“We made a little change between our No. 1 and 2 doubles. Our No. 2 doubles has been playing some really great tennis, and I thought they deserved the opportunity to play that team today from Georgia Tech,” Yaroshuk-Tews said.

Laurente and Bolivar took advantage of the opportunity of playing in the one spot. After splitting the first six games of the match 3-3 with Georgia Tech’s Kendal Woodard and Megan Kurey, the Hurricane duo started to pull away. The Hurricanes won five out of the last six games to finish of the statement win.

In the two-doubles matchup, Miami’s 24th-ranked Clementina Riobueno and Monique Albuquerque started the match down 3-2, but would go to win the next four games to take a 6-3 lead. After trading a few games, the duo did prevail 8-6 against Georgia Tech’s 49th-ranked Muriel Wacker and Natasha Prokhnevska.

“I was real happy with both of our doubles teams today,” Yaroshuk-Tews said. “I was even happier to see how happy Monique and Clementina were for our No. 1 team to come away with that match. That was a big win for them. The goal is to get both those teams in the NCAA Tournament and we took a step in the right direction today.”

“She’s a tough competitor,” Laurente said. “I was just ready for her and for every single ball.”

Following Laurente’s victory, Riobueno brought in another win against Georgia Tech’s Rasheeda McAdoo. Riobueno controlled her opponent and the match throughout its entirety, winning in straight sets 6-2, 6-1.

On the next court over, Lina Lileikite played with confidence, taking down Georgia Tech’s Megan Kurey. She would go on to finish her opponent in straight sets 6-2, 6-1.

Another highlight of today’s match was the singles play of No. 71 Wagner. Trailing in the first set 5-1 to Georgia Tech’s Kendal Woodard, she dug deep and won six of the next seven games to take the first set 7-6. Wagner kept the momentum going and won the second set 6-2. After losing five of the first six games, Wagner won 11 of the last 14 to close out the victory.

In what turned out to be the longest match of the day, Albuquerque defeated Georgia Tech’s Alexa Anton-Ohlmeyer in a three-setter. After splitting the first two sets 6-3 and then 3-6, the two were tied 6-6 in the third set, forcing a tiebreaker, in which Albuquerque came prevailed 7-5.

At No. 6 singles, Bolivar played a tight match against Georgia Tech’s Muriel Wacker. Bolivar split the first and second set with her opponent and because Miami had already won the match at this point, a 10-point tiebreaker (win by two) would determine the winner. After constantly going back and forth, Bolivar would finish the tiebreaker winning with a score of 12-10.

The Hurricanes return to action on March 7 when they hit the road for their first ACC road match of the year against the Pittsburgh Panthers.