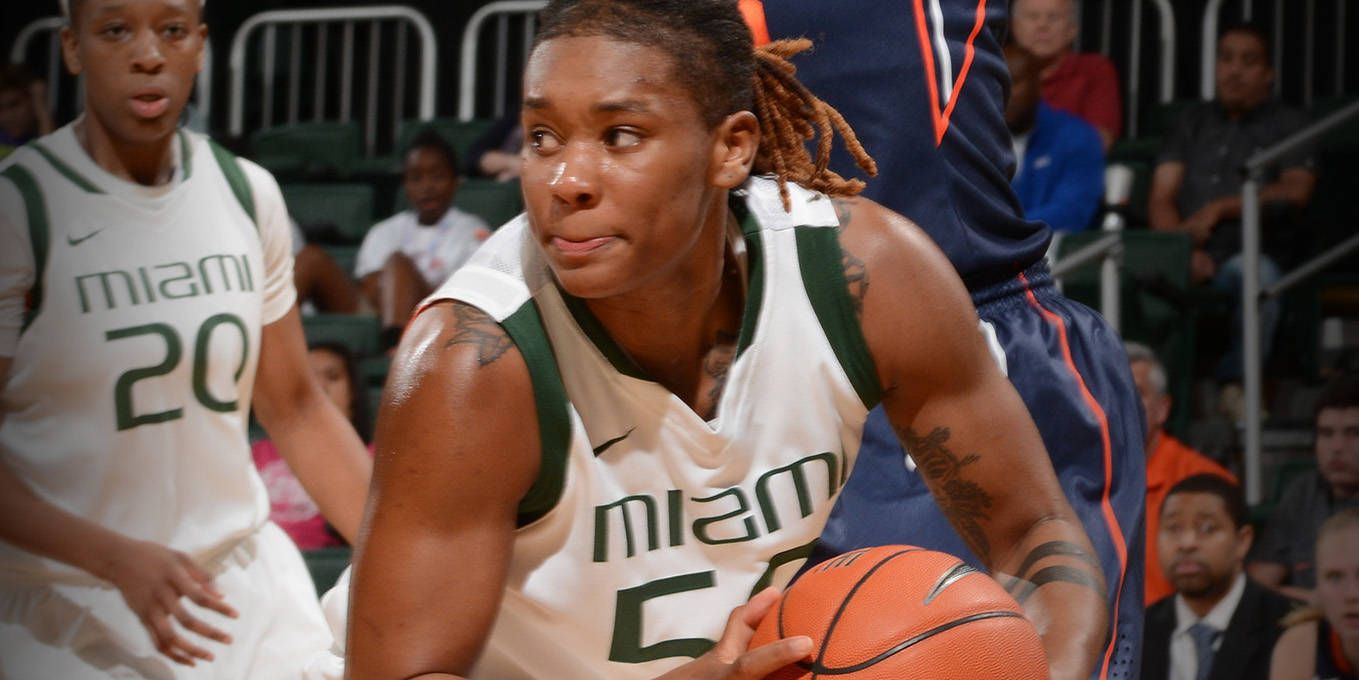 The Game
The Hurricanes (15-13, 7-8 ACC) host the Pittsburgh Panthers on Sunday, Mar. 2 at 1 p.m. in the regular-season finale. It will also be Senior Day at the BankUnited Center, where Miami will honor seniors Maria Brown and Krystal Saunders.

Free Youth Clinic
In honor of the 28th Annual National Girls and Women in Sports day, the University of Miami will host a FREE clinic for girls on March 2.The clinic will take place at 11 a.m. in the Fieldhouse at the BankUnited Center on the University of Miami’s campus and is open to all girls in the 7th grade and below.

Last Time Out
In one of the best performances of the season, Miami left Charlottesville, Va., with a 20-point win over Virginia. Down 11 in the first half, the Hurricanes turned it up a notch in the second half where they led by as many as 22.

Hayes Turns it Up
Keyona Hayes may have played the best game of her career in the win at UVa, matching her career-high of 22 points on 10-of-12 shooting from the field. Hayes was one rebound shy of notching her third double-double of the season and started the game 7-for7 from the field.

Strength of Schedule
Miami’s strength of schedule ranks 28th in the country. The Hurricanes have played or will play the No. 2, No. 7, No. 9, No. 13, No. 14, No. 20, and No. 23 teams this season. In all but two of those games, Miami won or was defeated by single digits. Over the past 11 games, six of Miami’s opponents have been ranked or in the receiving votes category at the time of the game.

Motley Crew
Motley has scored in double-figures in 16 of the last 18 games for Miami, and for the first time all season has emerged as the Hurricanes’ leading scorer at 11.2 ppg. Motley poured in 20 second half points in front of family and friends in the win at Virginia on Thursday.

Motley has been sensational for the Hurricanes in ACC play, averaging 16.6 ppg over the last seven games while shooting the ball at a 55-percent clip. Motley ranks fifth among freshman in the ACC with 13.9 ppg in conference. Also impressive are Motley’s performances against top-10 teams, where she is averaging 15.7 ppg (Duke, North Carolina, Notre Dame and Maryland).

Scouting Pittsburgh
The Pitt Panthers come to Miami with an overall record of 11-18 and 3-12 in ACC play. Pittsburgh has lost three-straight to Virginia Tech, Syracuse and NC State since their last win against Clemson. The Panthers are led by Brianna Kiesel’s 16.5 ppg and Asia Logan’s 11.4.

Coverage
Sunday’s regular-season finale will be televised on your local RSN including Fox Sports South, Sun Sports and ESPN3 (subject to blackout) with play-by-play provided by Mike Hogewood and color commentary added by Debbie Antonelli. Click here for the entire TV affiliate list.

Block Party
The Hurricanes rank fourth in the ACC with 4.4 blocks per game. Jassany Williams leads the group, ranking fourth in the conference with 51 blocks this season (1.8/game). Williams tallied five rejections in the win at Virginia on Thursday.

The Coach
Miami is led by head coach Katie Meier, who is in her ninth season at the helm of the women’s basketball program in Coral Gables. Meier has a record of 161-119 through eight-plus seasons at Miami and a career record of 237-165 as a head coach.