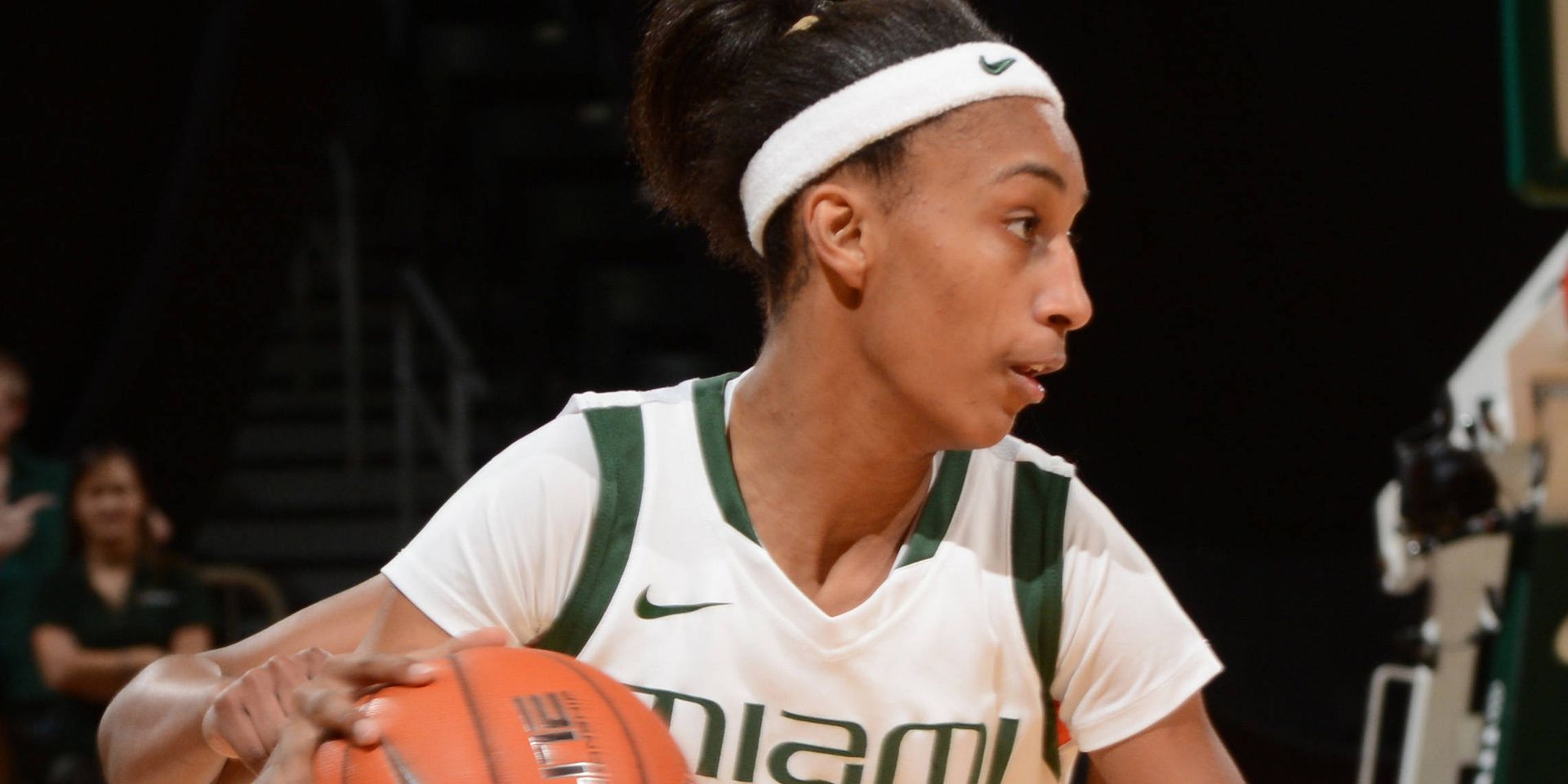 Last Time Out
The Hurricanes got off to a strong start against Syracuse, but found themselves trailing by three at the half. The Orange opened the second half on a 10-0 run and Miami was unable to overcome the deficit. Caprice Dennis led Miami with 14 points, reaching double-figures for the 14th game this season.

Strength of Schedule
Miami’s strength of schedule ranks 27th in the country. The Hurricanes have played or will play the No. 2, No. 7, No. 8, No. 11, No. 14, No. 20 teams this season. In all but two of those games, Miami won or was defeated by single digits. Over the past nine games, six of Miami’s opponents have been ranked or in the receiving votes category at the time of the game.

Dennis Plays Big Against Syracuse
Sophomore Caprice Dennis provided the Hurricanes with 14 points on Thursday vs Syracuse, going 5-for-11 from the field and 3-for-8 from behind the arc. Dennis’ game against Syracuse was the 14th time this season she has reached double-figures.

Motley Crew
Adrienne Motley has been sensational for the Hurricanes in ACC play, averaging 15.6 ppg over the last six games while shooting the ball at a 57 percent clip. Motley ranks fifth among freshman in the ACC with 13.3 ppg in conference. Also impressive are Motley’s performances against top-10 teams, where she is averaging 15.7 ppg (Duke, North Carolina, Notre Dame and Maryland).

Scouting Wake Forest
Wake Forest comes to Miami with a 14-12 overall record and 5-8 in ACC play. The Demon Deacons are led by Dearica Hamby’s 21.7 ppg and Chelsea Douglas’ 18.8 ppg.  Wake Forest has won two of their last three, including wins against Pitt and Virginia Tech. Most recently, the Deacs fell at home to No. 2 Notre Dame 86-61.

Round Two vs Wake
Back on Jan. 4 the Hurricanes walloped Wake Forest on the road in the ACC opener, 84-53. Krystal Saunders, Adrienne Motley, Suriya McGuire and Maria Brown all scored in double-figures in the win. Miami shot 44 percent from the field and held Wake Forest’s Chelsea Douglas to just two points.

Sterling Steps Up
For the second-straight game, junior Necole Sterling has stepped up and provided an offensive spark for the Hurricanes off the bench. After matching her career-high of 14 points in the win against Florida State, Sterling contributed eight points for Miami against Syracuse on Thursday.

Coverage
Sunday’s game vs. Syracuse will be televised on numerous channels in the RSN package. For a complete list of TV affiliates, click here. Mike Hogewood will be providing the play-by-play and Debbie Antontelli will add color commentary.

Block Party
The Hurricanes rank third in the ACC with 4.5 blocks per game. Jassany Williams leads the group, ranking fourth in the conference with 46 blocks this season (1.8/game). On Thursday against Syracuse, Williams swatted four shots.

The Coach
Miami is led by head coach Katie Meier, who is in her ninth season at the helm of the women’s basketball program in Coral Gables. Meier has a record of 160-118 through eight-plus seasons at Miami and a career record of 236-164 as a head coach.

Looking Ahead
The Hurricanes hit the road for their final ACC road game of the season on Thursday, Feb. 27 when they travel to Charlottesville, Va., to take on the Virginia Cavaliers.