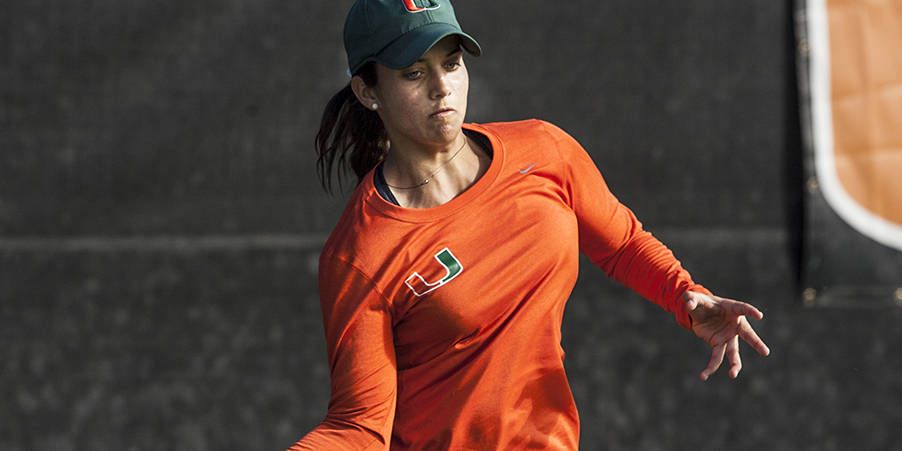 “I was really happy with the way the team played today,” head coach Paige Yaroshuk-Tews said. “We played with a lot of energy and intensity and didn’t take any points off. The girls showed incredible attention to detail and did a really good job of just getting back to the basics.”

Starting in doubles, the Hurricanes took just 48 minutes to win the point, getting victories from the one-doubles and the three-doubles team.

Brittany Dubins and Stephanie Wagner bolted out to a 4-0 lead against Nataliya Bredikhina and Olga Bredikhina. The Hurricanes’ third singles team kept that same pace, finishing off the Russian twins 8-0.

“Coach told us to be super energetic in doubles and in singles,” Riobueno said. “We played really good in doubles, dominating every single court and came out with a lot of intensity in singles as well.”

Miami’s two-doubles team was leading Alexandra Stanova and Olivia Gaudreault when their match was stopped after the Hurricanes’ second doubles win. Melissa Bolivar and Kelsey Laurente were on the verge of winning their match, as they held a 7-1 lead when it halted.

Miami continued its dominance on the singles side, with all six singles matches starting off with a first-set win for the Hurricanes.

Playing in the one spot, No. 33 Laurente was the first to punch her victory, defeating Kristina Hovsepyan 6-2, 6-1.

Laurente controlled the entire match, using her energy and emotion to put away her opponent in dominant fashion.

Bolivar and Riobueno both cruised to convincing wins as well. Bolivar defeated Olivia Gaudreault in straight sets 6-0, 6-3 and Riobeno lost just three total games in her match as she put away Bredikhina.

Leading six games to none, the Hurricanes final match still going on was No. 2 singles where Wagner was competing with Maryland’s Alexandra Stanova. After taking the first set 6-2, Stanova battled back to take four games in the second set, but Wagner was too much for her to handle as she took the match 6-2, 6-4.

The win for the Hurricanes marks the first ACC win of the season. The Hurricanes get back to action on Sunday, Feb. 23 when Notre Dame comes to down for a dual match beginning at 12 p.m. There will be free Carolina Ale House food as supplies last.

After the match, the Hurricane coaches and players will put on a clinic for kids in 1st – 8th grade. Only 50 kids can participate so please RSVP to umwomenstennis@gmail.com.