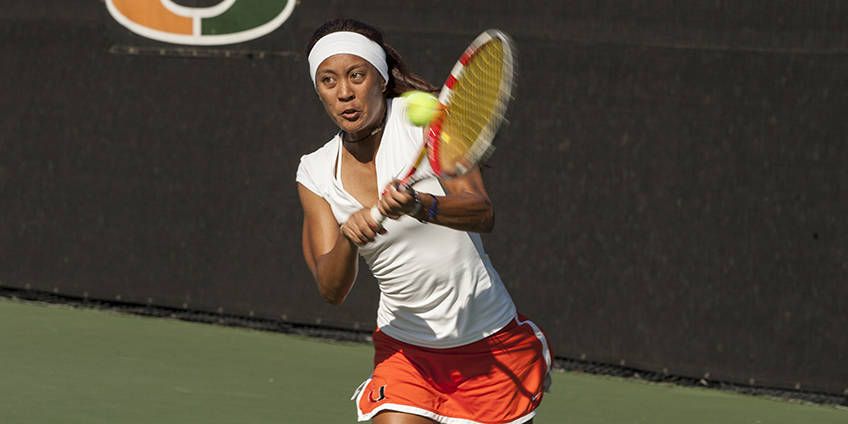 W. Ten Falls to No. 4 UGA at National Indoors

CHARLOTTESVILLE, Va. –The ninth-ranked University of Miami women’s tennis team fell to No. 4 Georgia on Friday in the first day of the ITA National Team Indoor Championships.

“Georgia was a much better team today,” head coach Paige Yaroshuk-Tews said. “We had a slow start in doubles and were outplayed in three singles spots—and that’s the match. The three remaining matches were looking good for us but unfortunately UGA pulled in that fourth point pretty quick.”

All three doubles teams found themselves facing deficits early, and were unable to overcome them. Miami’s second doubles team consisting of Melissa Bolivar and Kelsey Laurente trailed 4-1 before making a comeback to get within one game of the Bulldogs. But Georgia’s Kate Fuller and Silvia Garcia wouldn’t let the Hurricanes get any closer, taking the match 6-4.

Stephanie Wagner and Lina Lileikite, playing three-singles for the Hurricanes, trailed early in the match before tying it up 3-3. The Hurricanes would win just one more game, however, falling to Lilly Kimbell and Caroline Brinson 6-4.

Miami’s 29th-ranked doubles duo of Monique Albuquerque and Clementina Riobueno also overcame an early deficit against fifth-ranked doubles team Lauren Herring and Maho Kowase to tie the match at three games apiece. But the Bulldogs were able to hold off the Miami rally for long enough that the match ended with Georgia leading 6-5 when the doubles point went in favor of the Bulldogs.

Once singles got going, the Hurricanes weren’t able to get any momentum going, falling in three matches.

Playing against the fourth-ranked player in the country, Miami’s 29th-ranked Wagner was defeated in straight sets 6-2, 6-2 by Georgia’s Herring.

Lina Lileikite, playing three singles, was defeated by No. 25 Kowase, also in straight sets by a score of 6-2, 6-3.

In the sixth singles slot, Miami’s Bolivar was defeated by Georgia’s Mia King in two sets, giving the opening match win to the Bulldogs.

Unfortunately, a phenomenal match between Riobueno and Georgia’s No. 33 Kimbell was unable to be completed. After winning the first set 6-2, Kimbell came back to win the second set, forcing a 10-point tiebreaker. When the match was stopped, Riobueno held a 9-2 lead in the tiebreaker.

“We will look to improve on things tomorrow,” Yaroshuk-Tews added. “We’ll be ready.”