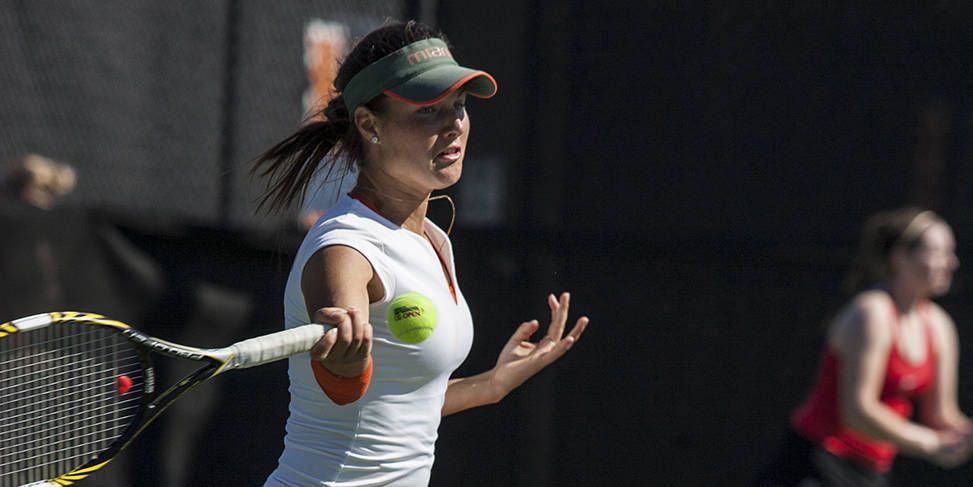 Wet courts pushed the doubles start time back an hour, but the Hurricanes made up for it with swift pace of play, taking just 27 minutes to win the doubles point against the Eagles.

29th-ranked duo of Monique Albuquerque and Clementina Riobueno were playing in the No. 2 doubles slot Friday and smoked Eagles Johanna Sterkel and Bettina Botha by a score of 6-1.

Playing three doubles was 55th-ranked Brittany Dubins and Stephanie Wagner. The Miami tandem made quick work of Florida Gulf Coast’s Gyanna Mandic and Breana Stampfli, shutting them out 6-0. Melissa Bolivar and Kelsey Laurente were on pace to win their match as well, leading 4-0 when Wagner and Dubins clinched the doubles point.

“We played with fire out there today,” Wagner said. “We were high in energy, we communicated well and we played good tennis.”

That energy certainly carried over to the singles matches as well, with five Hurricanes tallying victories against the Eagles.

Albuquerque was the first off the court, taking her match against Elizabeth Means in straight sets 6-0, 6-0. The junior from Brazil has now won three singles matches in a row en route to her 4-1 spring singles record.

Also making quick work of her opponent was Lina Lileikite, who defeated her opponent 6-0, 6-2 in dominant fashion. With the win, Lileikite notched her third singles victory of the season.

Next to come off the courts was Laurente, who was playing in the No. 1 singles slot against the Eagles. Laurente proved to be too much for Sarah Means, as she raced to a 6-1, 6-0 win and kept her spring singles record unblemished at 4-0.

32nd-ranked Wagner won her match against Breana Stampfli by a score of 6-4, 6-2. After starting off a little slow, Wagner picked it up in the second set and won by a four-game margin.

“At the beginning I didn’t really have a good start, but I got the job done in the first set, winning 6-4,” Wagner said. “In the second set I started to play more aggressive, went after my shots, and played well in the second set.”

Meanwhile, Riobueno—playing in the No. 3 singles spot—had just one a battle of a first set against Johanna Sterkel 7-5. Riobueno didn’t have any trouble putting away Sterkel in the second set, defeating her 6-1. With the win, Riobueno improves her spring singles record to 3-2.

In No. 6 singles, Dubins came out ahead in the first set, winning by a score or 6-2. Florida Gulf Coast’s Candela Munoz Giron flipped the score in set number two and evened the match at one set apiece. In the 10-point tiebreaker, Dubins battled came up on the wrong end, falling 10-8.

Next up for the Hurricanes is the ITA National Team Indoor Championships in Charlottesville, Va., on Feb. 7-10. For more information on the team be sure to follow @HurricaneTennis.